Culture of the Soviet Union

During Stalin’s rule, Soviet culture was characterized by the rise and domination of the government-imposed style of socialist realism, with all other trends severely repressed. At the same time, a degree of social liberalization included more equality for women.

Give examples of culture in the Soviet Union

Socialist realism
A style of realistic art that was developed in the Soviet Union and became a dominant style in other socialist countries.
Great Purge
A campaign of political repression in the Soviet Union from 1936 to 1938 that involved a large-scale purge of the Communist Party and government officials, repression of peasants and the Red Army leadership, widespread police surveillance, suspicion of “saboteurs”, imprisonment, and arbitrary executions.
Russian Orthodox Church
One of the Eastern Orthodox churches, in full communion with other Eastern Orthodox patriarchates.

The culture of the Soviet Union passed through several stages during the USSR’s 69-year existence. People of various nationalities from all 15 union republics contributed, with a narrow majority of Russians. The Soviet state supported cultural institutions but also carried out strict censorship.

During the first 11 years following the Russian Revolution (1918–1929), there was relative freedom for artists, as Lenin wanted art to be accessible to the Russian people. On the other hand, hundreds of intellectuals, writers, and artists were exiled or executed and their work banned.

The government encouraged a variety of trends. In art and literature, numerous schools, some traditional and others radically experimental, proliferated.

Later, during Stalin’s rule, Soviet culture was characterized by the rise and domination of the government-imposed style of socialist realism, with all other trends severely repressed with rare exceptions like Mikhail Bulgakov’s works. Many writers were imprisoned and killed.

The main feature of communist attitudes towards the arts and artists from 1918-1929 was relative freedom and significant experimentation with several different methods to find a distinctive Soviet style of art.

This was a time of relative freedom and experimentation for the social and cultural life of the Soviet Union. The government tolerated a variety of trends in these areas, provided they were not overtly hostile to the regime. In art and literature, numerous schools, some traditional and others radically experimental, proliferated. Communist writers Maxim Gorky and Vladimir Mayakovsky were active during this time, but other authors, many of whose works were later repressed, published work without socialist political content. Film, as a means of influencing a largely illiterate society, received encouragement from the state; much of cinematographer Sergei Eisenstein’s best work dates from this period.

Under Commissar Anatoliy Lunacharskiy, education entered a phase of experimentation based on progressive theories of learning. At the same time, the state expanded the primary and secondary school system and introduced night schools for working adults. The quality of higher education was affected by admissions policies that preferred entrants from the proletarian class over those of bourgeois backgrounds, regardless of the applicants’ qualifications.

The state eased the active persecution of religion dating to war communism but continued to agitate on behalf of atheism. The party supported the Living Church reform movement within the Russian Orthodox Church in hopes that it would undermine faith in the church, but the movement died out in the late 1920s.

In family life, attitudes generally became more permissive. The state legalized abortion and made divorce progressively easier to obtain, while public cafeterias proliferated at the expense of private family kitchens.

Culture During the Stalin Era

Socialist realism is characterized by the glorified depiction of communist values, such as the emancipation of the proletariat, with realistic imagery. The purpose of socialist realism was to limit popular culture to a specific, highly regulated faction of creative expression that promoted Soviet ideals. The party was of the utmost importance and was always to be favorably featured. Revolutionary romanticism elevated the common worker, whether factory or agricultural, by presenting his life, work, and recreation as admirable to show how much the standard of living had improved thanks to the revolution. Art was used as educational information.

Many writers were imprisoned and killed or died of starvation, including Daniil Kharms, Osip Mandelstam, Isaac Babel, and Boris Pilnyak. Andrei Platonov worked as a caretaker and wasn’t allowed to publish. The work of Anna Akhmatova was also condemned by the regime, although she notably refused the opportunity to escape to the West. After a short Ukrainian literature renaissance, more than 250 Soviet Ukrainian writers died during the Great Purge. Texts of imprisoned authors were confiscated, though some were published later. Books were removed from libraries and destroyed.

Musical expression was also repressed during the Stalin era, and at times the music of many Soviet composers was banned. Dmitri Shostakovich experienced a long and complex relationship with Stalin during which his music was denounced and prohibited twice, in 1936 and 1948 (see Zhdanov decree). Sergei Prokofiev and Aram Khachaturian had similar cases. Although Igor Stravinsky did not live in the Union, his music was officially considered formalist and anti-Soviet. 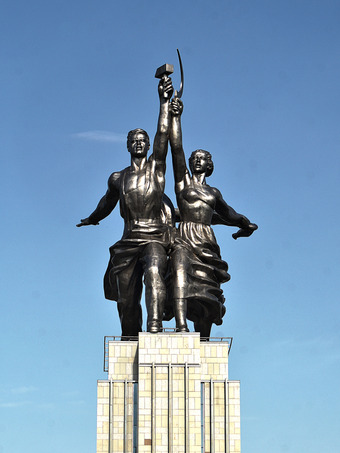 Society During the Stalin Era

During this period (1927-1953), the Soviet people benefited from social liberalization. Women were eligible for the same education as men and at least legally speaking, obtained the same rights as men in the workplace. Although in practice these goals were not reached, the efforts to achieve them and the statement of theoretical equality led to a general improvement in the socioeconomic status of women. Stalinist development also contributed to advances in health care, which marked a massive improvement over the Imperial era. Stalin’s policies granted the Soviet people access to free health care and education. Widespread immunization programs created the first generation free from fear of typhus and cholera. The occurrences of these diseases dropped to record-low numbers and infant mortality rates were substantially reduced, increasing the life expectancy for both men and women by more than 20 years by the mid-to-late 1950s. Many of the more extreme social and political ideas that were fashionable in the 1920s, such as anarchism, internationalism, and the belief that the nuclear family was a bourgeois concept, were abandoned. Schools began to teach a more nationalistic course with emphasis on Russian history and leaders, though Marxist underpinnings remained. Stalin also began to create a Lenin cult. During the 1930s, Soviet society assumed the basic form it would maintain until its collapse in 1991.

Urban women under Stalin were the first generation able to give birth in a hospital with access to prenatal care. Education also improved with economic development. The generation born during Stalin’s rule was the first in which most members were literate. Some engineers were sent abroad to learn industrial technology, and hundreds of foreign engineers were brought to Russia on contract. Transport links were also improved as many new railways were built–with forced labor, costing thousands of lives. Workers who exceeded their quotas, Stakhanovites, received many incentives, although many were in fact “arranged” to succeed by receiving extreme help, and their achievements then used for propaganda.

Starting in the early 1930s, the Soviet government began an all-out war on organized religion. Many churches and monasteries were closed and scores of clergymen were imprisoned or executed. The state propaganda machine vigorously promoted atheism and denounced religion as an artifact of capitalist society. In 1937, Pope Pius XI decried the attacks on religion in the Soviet Union. By 1940, only a small number of churches remained. The early anti-religious campaigns under Lenin were mostly directed at the Russian Orthodox Church, as it was a symbol of the czarist government. In the 1930s, however, all faiths were targeted: minority Christian denominations, Islam, Judaism, and Buddhism.