Crisis Points of the Cold War

The Suez Crisis was a mostly failed invasion of Egypt in late 1956 by Israel followed by the United Kingdom and France. The aims were to regain Western control of the Suez Canal and remove Egyptian President Gamal Abdel Nasser from power.

Explain the events of the 1956 Suez Crisis

Gamal Abdel Nasser
The second President of Egypt, serving from 1956 until his death, who led the 1952 overthrow of the monarchy and introduced far-reaching land reforms the following year.
Suez Canal
An artificial sea-level waterway in Egypt connecting the Mediterranean Sea to the Red Sea through the Isthmus of Suez, which offers watercraft a shorter journey between the North Atlantic and northern Indian oceans via the Mediterranean and Red seas by avoiding the South Atlantic and southern Indian oceans, reducing the journey by approximately 4,300 miles.

The Suez Crisis, also named the Tripartite Aggression and the Kadesh Operation, was an invasion of Egypt in late 1956 by Israel, followed by the United Kingdom and France. The aims were to regain Western control of the Suez Canal and remove Egyptian President Gamal Abdel Nasser from power. After the fighting started, the United States, the Soviet Union, and the United Nations forced the three invaders to withdraw. The episode humiliated Great Britain and France and strengthened Nasser.

On October 29, Israel invaded the Egyptian Sinai. Britain and France issued a joint ultimatum to cease fire, which was ignored. On November 5, Britain and France landed paratroopers along the Suez Canal. The Egyptian forces were defeated, but did block the canal to all shipping. It became clear that the Israeli invasion and the subsequent Anglo-French attack were planned beforehand by the three countries.

The three allies attained a number of their military objectives, but the Canal was now useless and heavy pressure from the United States and the USSR forced them to withdraw. U.S. President Dwight D. Eisenhower had strongly warned Britain not to invade; he now threatened serious damage to the British financial system. Historians conclude the crisis “signified the end of Great Britain’s role as one of the world’s major powers.” Peden in 2012 stated, “The Suez Crisis is widely believed to have contributed significantly to Britain’s decline as a world power.” The Suez Canal was closed from October 1956 until March 1957. Israel fulfilled some of its objectives, such as attaining freedom of navigation through the Straits of Tiran.

As a result of the conflict, the United Nations created the UNEF Peacekeepers to police the Egyptian-Israeli border, British Prime Minister Anthony Eden resigned, Canadian Minister of External Affairs Lester Pearson won the Nobel Peace Prize, and the USSR may have been emboldened to invade Hungary. 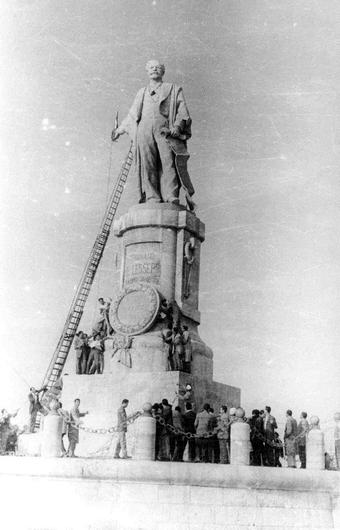 The Suez Crisis in the Context of the Cold War

The Middle East during the Cold War was of extreme importance and also great instability. The region lay directly south of the Soviet Union, which traditionally had great influence in Turkey and Iran. The area also had vast reserves of oil, not crucial for either superpower in the 1950s (which each held large oil reserves on its own), but essential for the rapidly rebuilding American allies Europe and Japan.

The original American plan for the Middle East was to form a defensive perimeter along the north of the region. Thus Turkey, Iraq, Iran, and Pakistan signed the Baghdad Pact and joined CENTO. The Eastern response was to seek influence in states such as Syria and Egypt. Czechoslovakia and Bulgaria made arms deals to Egypt and Syria, giving Warsaw Pact members a strong presence in the region. Egypt, a former British protectorate, was one of the region’s most important prizes with its large population and political power throughout the region. British forces were thrown out by General Gamal Abdel Nasser in 1956, when he nationalized the Suez Canal. Syria was a former French protectorate.

Eisenhower persuaded the United Kingdom and France to retreat from a badly planned invasion with Israel launched to regain control of the canal from Egypt. While the Americans were forced to operate covertly so as not to embarrass their allies, the Eastern Bloc nations made loud threats against the “imperialists” and worked to portray themselves as the defenders of the Third World. Nasser was later lauded around the globe, especially in the Arab world. While both superpowers courted Nasser, the Americans balked at funding the massive Aswan High Dam project. The Warsaw Pact countries happily agreed, however, and signed a treaty of friendship and cooperation with the Egyptians and the Syrians.

Thus the Suez stalemate was a turning point heralding an ever-growing rift between the Atlantic Cold War allies, which were becoming far less of a united monolith than they were in the immediate aftermath of the Second World War. Italy, France, Spain, West Germany, Norway, Canada, and Britain also developed their own nuclear forces as well as a Common Market to be less dependent on the United States. Such rifts mirror changes in global economics. American economic competitiveness faltered in the face of the challenges of Japan and West Germany, which recovered rapidly from the wartime decimation of their respective industrial bases. The 20th-century successor to the UK as the “workshop of the world,” the United States found its competitive edge dulled in the international markets while it faced intensified foreign competition at home. Meanwhile, the Warsaw Pact countries were closely allied both militarily and economically. All Warsaw Pact nations had nuclear weapons and supplied other countries with weapons, supplies, and economic aid.