The Dunkirk evacuation was the removal of Allied soldiers from the beaches and harbor of Dunkirk by the attack of German soldiers, which started as a disaster but soon became a miraculous triumph.

Evaluate the success or failure of the evacuation at Dunkirk

Vichy France
The common name of the French State during World War II, specifically the southern, unoccupied “Free Zone,” as Germany militarily occupied northern France.
Maginot Line
A line of concrete fortifications, obstacles, and weapon installations that France constructed on the French side of its borders with Switzerland, Germany, and Luxembourg during the 1930s.
Dunkirk evacuation
The evacuation of Allied soldiers from the beaches and harbour of Dunkirk, France, between May 26 and June 4, 1940, during World War II.

The Dunkirk evacuation, code-named Operation Dynamo and also known as the Miracle of Dunkirk, was the evacuation of Allied soldiers from the beaches and harbor of Dunkirk, France between May 26 and June 4, 1940, during World War II. The operation was decided upon when large numbers of Belgian, British, and French troops were cut off and surrounded by the German army during the Battle of France. In a speech to the House of Commons, British Prime Minister Winston Churchill called the events in France “a colossal military disaster,” saying “the whole root and core and brain of the British Army” had been stranded at Dunkirk and seemed about to perish or be captured. In his We shall fight on the beaches speech on June 4, he hailed their rescue as a “miracle of deliverance.”

On the first day of the evacuation, only 7,669 men were evacuated, but by the end of the eighth day, a total of 338,226 soldiers had been rescued by a hastily assembled fleet of over 800 boats. Many troops were able to embark from the harbor’s protective mole onto 39 British destroyers and other large ships, while others had to wade out from the beaches, waiting for hours in the shoulder-deep water. Some were ferried from the beaches to the larger ships by what came to be known as the little ships of Dunkirk, a flotilla of hundreds of merchant marine boats, fishing boats, pleasure craft, and lifeboats called into service for the emergency. The British Expeditionary Force (BEF) lost 68,000 soldiers during the French campaign and had to abandon nearly all of their tanks, vehicles, and other equipment.

In his speech to the House of Commons on June 4, Churchill reminded the country that “we must be very careful not to assign to this deliverance the attributes of a victory. Wars are not won by evacuations.”

More than 100,000 evacuated French troops were quickly and efficiently shuttled to camps in various parts of southwest England, where they were temporarily lodged before being repatriated. British ships ferried French troops to Brest, Cherbourg, and other ports in Normandy and Brittany, although only about half of the repatriated troops were deployed against the Germans before the surrender of France. For many French soldiers, the Dunkirk evacuation represented only a few weeks’ delay before being killed or captured by the German army after their return to France. Of the French soldiers evacuated from France in June 1940, about 3,000 joined Charles de Gaulle’s Free French army in Britain. 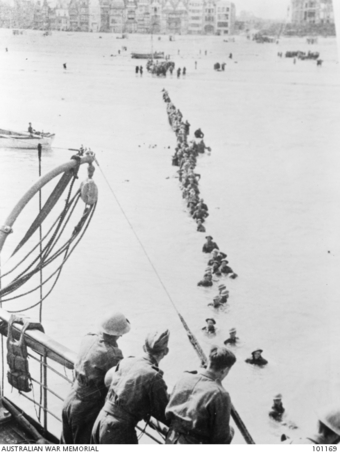 In 1939, after Nazi Germany invaded Poland marking the beginning of the Second World War, the United Kingdom sent the BEF to aid in the defense of France, landing troops at Cherbourg, Nantes, and Saint-Nazaire. By May 1940 the force consisted of ten divisions in three corps under the command of General John Vereker, 6th Viscount Gort. Working with the BEF were the Belgian Army and the French First, Seventh, and Ninth Armies.

During the 1930s, the French constructed the Maginot Line, a series of fortifications along their border with Germany. This line was designed to deter a German invasion across the Franco-German border and funnel an attack into Belgium, where it would be met by the best divisions of the French Army. Thus, any future war would take place outside of French territory, avoiding a repeat of the First World War. The area immediately to the north of the Maginot Line was covered by the heavily wooded Ardennes region, which French General Philippe Pétain declared to be “impenetrable” as long as “special provisions” were taken. He believed that any enemy force emerging from the forest would be vulnerable to a pincer attack and destroyed. The French commander-in-chief, Maurice Gamelin, also believed the area to be of limited threat, noting that it “never favoured large operations.” With this in mind, the area was left lightly defended.

The initial plan for the German invasion of France called for an encirclement attack through the Netherlands and Belgium, avoiding the Maginot Line. Erich von Manstein, then Chief of Staff of the German Army Group A, prepared the outline of a different plan and submitted it to the OKH (German High Command) via his superior, Generaloberst Gerd von Rundstedt. Manstein’s plan suggested that Panzer divisions should attack through the Ardennes, then establish bridgeheads on the Meuse River and rapidly drive to the English Channel. The Germans would thus cut off the Allied armies in Belgium and Flanders. This part of the plan later became known as the Sichelschnitt (“sickle cut”). Adolf Hitler approved a modified version of Manstein’s ideas, today known as the Manstein Plan, after meeting with him on February 17.

On May 10, Germany attacked Belgium and the Netherlands. Army Group B, under Generaloberst Fedor von Bock, attacked into Belgium, while the three Panzer corps of Army Group A under Rundstedt swung around to the south and drove for the Channel. The BEF advanced from the Belgian border to positions along the River Dyle within Belgium, where they fought elements of Army Group B starting on May 10. They were ordered to begin a fighting withdrawal to the Escaut River on May 14 when the Belgian and French positions on their flanks failed to hold. During a visit to Paris on May 17, British Prime Minister Winston Churchill was astonished to learn from Gamelin that the French had committed all their troops to the ongoing engagements and had no strategic reserves.

On May 19, Gort met with French General Gaston Billotte, commander of the French First Army and overall coordinator of the Allied forces. Billotte revealed that the French had no troops between the Germans and the sea. Gort immediately saw that evacuation across the Channel was the best course of action and began planning a withdrawal to Dunkirk, the closest location with good port facilities. Surrounded by marshes, Dunkirk boasted old fortifications and the longest sand beach in Europe, where large groups could assemble. After continued engagements and a failed Allied attempt on May 21 at Arras to cut through the German spearhead, the BEF was trapped along with the remains of the Belgian forces and the three French armies in an area along the northern French coast. By May 24, the Germans had captured the port of Boulogne and surrounded Calais. Later that day, Hitler issued Directive 13, which called for the Luftwaffe to defeat the trapped Allied forces and stop their escape. On May 26, Hitler ordered the panzer groups to continue their advance, but most units took another 16 hours to attack. The delay gave the Allies time to prepare defenses vital for the evacuation and prevented the Germans from stopping the Allied retreat from Lille.

The Halt Order has been the subject of much discussion by historians. Guderian considered the failure to order a timely assault on Dunkirk to be one of the major German mistakes on the Western Front. Rundstedt called it “one of the great turning points of the war,” and Manstein described it as “one of Hitler’s most critical mistakes.”

Vichy France is the common name of the French State headed by Marshal Philippe Pétain during World War II. In particular, it represents the unoccupied “Free Zone” (zone libre) that governed the southern part of the country.

From 1940 to 1942, while the Vichy regime was the nominal government of France as a whole, Germany’s military occupied northern France. Thus, while Paris remained the de jure capital of France, the de facto capital of southern “unoccupied” France was the town of Vichy, 360 km to the south. Following the Allied landings in French North Africa in November 1942, southern France was also militarily occupied by Germany and Italy. The Vichy government remained in existence, but as a de facto client and puppet of Nazi Germany. It vanished in late 1944 when the Allies occupied all of France.

The French State maintained nominal sovereignty over the whole of French territory, but had effective full sovereignty only in the Free Zone. It had limited civil authority in the northern zones under military occupation. The occupation was to be provisional pending the conclusion of the war, which at the time appeared imminent. The occupation also presented certain advantages, such as keeping the French Navy and the colonial empire under French control and avoiding full occupation of the country by Germany, thus maintaining a meaningful degree of French independence and neutrality. The French Government at Vichy never joined the Axis alliance.