The Battle of Britain, when the British Royal Air Force defended the United Kingdom against the German Air Force attacks, was the first major Nazi defeat and a turning point of World War II.

Describe the Battle of Britain

The Blitz
The name borrowed by the British press and applied to the heavy and frequent bombing raids carried out over Britain in 1940 and 1941 during the Second World War.
Royal Air Force
The United Kingdom’s aerial warfare force; formed towards the end of the First World War on 1 April 1918, it is the oldest independent air force in the world.
Operation Sea Lion
Nazi Germany’s code name for a provisionally proposed invasion of the United Kingdom during the Battle of Britain in the Second World War.
Luftwaffe
The aerial warfare branch of the German Wehrmacht (armed forces) during World War II.

The Battle of Britain occurred during the Second World War when the Royal Air Force (RAF) defended the United Kingdom against the German Air Force (Luftwaffe) attacks from the end of June 1940. It is described as the first major campaign fought entirely by air forces.

The primary objective of the Nazi German forces was to compel Britain to agree to a negotiated peace settlement. In July 1940, the air and sea blockade began with the Luftwaffe mainly targeting coastal shipping convoys, ports, and shipping centers such as Portsmouth. On August 1, the Luftwaffe was directed to achieve air superiority over RAF with the aim of incapacitating RAF Fighter Command. Twelve days later, it shifted the attacks to RAF airfields and infrastructure. As the battle progressed, the Luftwaffe also targeted factories involved in aircraft production and strategic infrastructure and eventually employed terror bombing on areas of political significance and civilians.

By preventing the Luftwaffe’s air superiority over the UK, the British forced Adolf Hitler to postpone and eventually cancel Operation Sea Lion, a proposed amphibious and airborne invasion of Britain. However, Nazi Germany continued bombing operations on Britain, known as the Blitz. The failure to destroy Britain’s air defenses to force an armistice (or even outright surrender) is considered the Nazis’ first major defeat in World War II and a crucial turning point in the conflict.

Several reasons have been suggested for the failure of the German air offensive. The Luftwaffe High Command did not develop a strategy for destroying British war industry; instead of maintaining pressure on any of them, it frequently switched from one type of industry to another. Neither was the Luftwaffe equipped to carry out strategic bombing; the lack of a heavy bomber and poor intelligence on British industry denied it the ability to prevail. 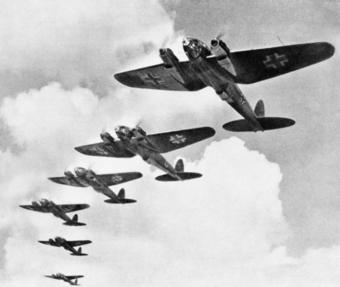 The early stages of World War II saw successful German invasions on the continent aided by the air power of the Luftwaffe, which was able to establish tactical air superiority with great efficiency. The speed with which German forces defeated most of the defending armies in Norway in early 1940 created a significant political crisis in Britain. In early May 1940, the Norway Debate questioned the fitness for office of British Prime Minister Neville Chamberlain. On May 10, the same day Winston Churchill became British Prime Minister, the Germans initiated the Battle of France with an aggressive invasion of French territory. RAF Fighter Command was desperately short of trained pilots and aircraft, but despite the objections of its commander Hugh Dowding that the diversion of his forces would leave home defenses weak, Churchill sent fighter squadrons to support operations in France, where the RAF suffered heavy losses.

After the evacuation of British and French soldiers from Dunkirk and the French surrender on June 22, 1940, Hitler mainly focused his energies on the possibility of invading the Soviet Union in the belief that the British, defeated on the continent and without European allies, would quickly come to terms. The Germans were so convinced of an imminent armistice that they began constructing street decorations for the homecoming parades of victorious troops. Although the British Foreign Secretary, Lord Halifax, and certain elements of the British public favored negotiated peace with an ascendant Germany, Churchill and a majority of his Cabinet refused to consider an armistice. Instead, Churchill used his skillful rhetoric to harden public opinion against capitulation and prepare the British for a long war. In his “This was their finest hour” speech of 18 June 1940, Churchill declared:

What General Weygand has called The Battle of France is over. The battle of Britain is about to begin. Upon this battle depends the survival of Christian civilisation. Upon it depends our own British life and the long continuity of our institutions and our Empire. The whole fury and might of the enemy must very soon be turned on us. Hitler knows that he will have to break us in this island or lose the war. If we can stand up to him, all Europe may be free and the life of the world may move forward into broad, sunlit uplands. But if we fail, then the whole world, including the United States, including all that we have known and cared for, will sink into the abyss of a new Dark Age made more sinister, and perhaps more protracted, by the lights of a perverted science. Let us therefore brace ourselves to our duties, and so bear ourselves that, if the British Empire and its Commonwealth last for a thousand years, men will still say, “This was their finest hour.”

From the outset of his rise to power, Hitler expressed admiration for Britain and throughout the Battle period he sought neutrality or a peace treaty. In secret conference on May 23, 1939 Hitler set out his rather contradictory strategy that an attack on Poland was essential and “will only be successful if the Western Powers keep out of it. If this is impossible, then it will be better to attack in the West and to settle Poland at the same time [with a surprise attack]. If Holland and Belgium are successfully occupied and held, and if France is also defeated, the fundamental conditions for a successful war against England will have been secured. England can then be blockaded from Western France at close quarters by the Air Force, while the Navy with its submarines extend the range of the blockade.”

The Blitz, from the German word “Blitzkrieg” (lightning war) was the name borrowed by the British press and applied to the heavy and frequent bombing raids carried out over Britain in 1940 and 1941 during the Second World War. This concentrated, direct bombing of industrial targets and civilian centers began with heavy raids on London on September 7, 1940, during the Battle of Britain. Adolf Hitler’s and Hermann Goering’s plans to destroy the Royal Air Force to allow an invasion of Britain were failing. In response to an RAF raid on Berlin, itself prompted by an accidental German bombing of London, they changed their tactics to the sustained bombing of civilian targets.

From September 7, 1940, one year into the war, London was systematically bombed by the Luftwaffe for 57 consecutive nights. More than one million London houses were destroyed or damaged and more than 40,000 civilians were killed, almost half of them in London. Ports and industrial centers outside London were also attacked. The main Atlantic sea port of Liverpool was bombed, causing nearly 4,000 deaths within the Merseyside area during the war. The North Sea port of Hull, a convenient and easily found target or secondary target for bombers unable to locate their primary targets, was subjected to 86 raids in the Hull Blitz during the war, with a conservative estimate of 1,200 civilians killed and 95 percent of its housing stock destroyed or damaged. Other ports, including Bristol, Cardiff, Portsmouth, Plymouth, Southampton, and Swansea, were also bombed, as were the industrial cities of Birmingham, Belfast, Coventry, Glasgow, Manchester, and Sheffield. Birmingham and Coventry were chosen because of the Spitfire and tank factories in Birmingham and the many munitions factories in Coventry. The city center of Coventry was almost destroyed, as was Coventry Cathedral.

The bombing failed to demoralize the British into surrender or significantly damage the war economy. The eight months of bombing never seriously hampered British production and the war industries continued to operate and expand. The Blitz was only authoried when the Luftwaffe failed to meet preconditions for a 1940 launch of Operation Sea Lion, the provisionally planned German invasion of Britain. By May 1941, the threat of an invasion of Britain had ended, and Hitler’s attention turned to Operation Barbarossa, the invasion of the Soviet Union. In comparison to the later Allied bombing campaign against Germany, the Blitz resulted in relatively few casualties; the British bombing of Hamburg in July 1943 inflicted some 42,000 civilian deaths, about the same as the entire Blitz. 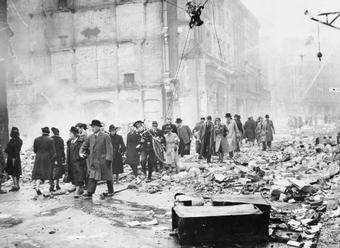 The Blitz: Office workers make their way to work through debris after a heavy air raid by the German Luftwaffe.