The Taliban is an Sunni Islamic fundamentalist movement that rose to power in Afghanistan after the Soviets withdrew in 1989 and ruled from 1996-2001, enforcing a strict interpretation of Islamic law that resulted in the brutal treatment of many Afghans, especially women.

Taliban
A Sunni Islamic fundamentalist political movement in Afghanistan currently waging war (an insurgency, or jihad) within that country. From 1996 to 2001, it held power in Afghanistan and enforced a strict interpretation of Sharia, or Islamic law, of which the international community and leading Muslims have been highly critical.
Islamic Emirate of Afghanistan
An Islamic state established in September 1996 when the Taliban began its rule of Afghanistan after the fall of Kabul. At its peak, the Taliban established control over approximately 90% of the country, whereas parts of the northeast were held by the Northern Alliance. The regime ended on December 9, 2001, forced out by the Northern Alliance backed by U.S. air forces.
Al Qaeda
A militant Sunni Islamist multi-national organization founded in 1988 by Osama bin Laden, Abdullah Azzam, and several other Arab volunteers who fought against the Soviet invasion of Afghanistan in the 1980s.
Osama bin Laden
The founder of al-Qaeda, the organization that claimed responsibility for the September 11 attacks on the United States, along with numerous other mass-casualty attacks worldwide.

Faced with mounting international pressure and numerous casualties, the Soviets withdrew in 1989 but continued to support Afghan President Mohammad Najibullah until 1992. Following the Soviet withdrawal, some of the foreign volunteers (including Osama bin Laden’s Al Qaeda) and young Afghan refugees, went on to continue violent jihad in Afghanistan, Pakistan, and abroad. According to political scientist Mohammed H. Hafez, some of the thousands of Afghan Arabs who left Afghanistan went on to become “capable leaders, religious ideologues and military commanders,” who played “vital roles” as insurgents or terrorists in places such as Algeria, Egypt, Bosnia, and Chechnya. Tens of thousands of Afghan refugee children in Pakistan were educated in madrases “in a spirit of conservatism and religious rigor,” explains political scientist Gilles Kepel, and went on to fill the ranks and leadership of the Taliban in Afghanistan and Sipah-e-Sahaba in Pakistan. When the Soviet Union fell shortly after its withdrawal from Afghanistan, the volunteers were overjoyed, believing that—in the words of Osama bin Laden—the credit for “the dissolution of the Soviet Union … goes to God and the mujahideen in Afghanistan … the US had no mentionable role.”

From 1989 until 1992, Najibullah’s government tried to solve the ongoing civil war with economic and military aid, but without Soviet troops on the ground. Pakistan’s spy agency (ISI), headed by Hamid Gul at the time, was interested in a trans-national Islamic revolution that would cover Pakistan, Afghanistan, and Central Asia. For this purpose, Pakistan masterminded an attack on Jalalabad for the mujahideen to establish its own government in Afghanistan. Najibullah tried to build support for his government by portraying his government as Islamic, and in the 1990 constitution the country officially became an Islamic state and all references of communism were removed. Nevertheless, Najibullah did not win any significant support, and with the dissolution of the Soviet Union in December 1991, he was left without foreign aid. This coupled with the internal collapse of his government led to his ousting from power in April 1992. After the fall of Najibullah’s government, the post-communist Islamic State of Afghanistan was established by the Peshawar Accord, a peace and power-sharing agreement under which all the Afghan parties were united in April 1992, except for the Pakistani supported Hezb-e Islami of Gulbuddin Hekmatyar. Hekmatyar started a bombardment campaign against the capital city Kabul, which marked the beginning of a new phase in the war.

Due to the sudden initiation of the war, working government departments, police units, and a system of justice and accountability for the newly created Islamic State of Afghanistan did not have time to form. Atrocities were committed by individuals of the different armed factions while Kabul descended into lawlessness and chaos. For civilians there was little security from murder, rape, and extortion. An estimated 25,000 people died during the most intense period of bombardment by Hekmatyar’s Hezb-i Islami and the Junbish-i Milli forces of Abdul Rashid Dostum, who created an alliance with Hekmatyar in 1994. Half a million people fled Afghanistan.

Southern and eastern Afghanistan were under the control of local commanders such as Gul Agha Sherzai and others. In 1994, the Taliban (a movement originating from Jamiat Ulema-e-Islam-run religious schools for Afghan refugees in Pakistan) also developed in Afghanistan as a political-religious force. The Taliban first took control of southern Afghanistan in 1994 and forced the surrender of dozens of local Pashtun leaders.

In late 1994, forces of military commander Ahmad Shah Massoud held on to Kabul. Rabbani’s government took steps to reopen courts, restore law and order, and initiate a nationwide political process with the goal of national consolidation and democratic elections. Massoud invited Taliban leaders to join the process but they refused. 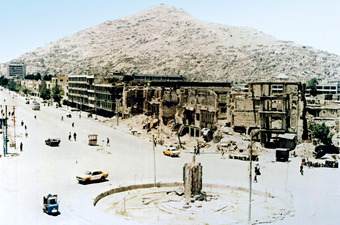 Afghan Civil War: A totally destroyed section of Kabul during the civil war in 1993.

The Taliban’s early victories in late 1994 were followed by a series of defeats that resulted in heavy losses. The Taliban attempted to capture Kabul in early 1995 but were repelled by forces under Massoud. In September 1996 as the Taliban, with military support from Pakistan and financial support from Saudi Arabia, prepared for another major offensive, Massoud ordered a full retreat from Kabul. The Taliban seized Kabul in the same month and established the Islamic Emirate of Afghanistan. They imposed a strict form of Sharia, similar to that found in Saudi Arabia.

The Taliban have been condemned internationally for the harsh enforcement of their interpretation of Islamic Sharia law, which has resulted in the brutal treatment of many Afghans, especially women. During their rule from 1996 to 2001, the Taliban and their allies committed massacres against Afghan civilians, denied UN food supplies to 160,000 starving civilians, and conducted a policy of scorched earth, burning vast areas of fertile land and destroying tens of thousands of homes. In its post-9/11 insurgency, the group has been accused of using terrorism as a specific tactic to further their ideological and political goals. Several Taliban and al-Qaeda commanders also ran a network of human trafficking, abducting women and selling them into sex slavery in Afghanistan and Pakistan.

After the fall of Kabul to the Taliban, Massoud and Dostum formed the Northern Alliance. The Taliban defeated Dostum’s forces during the Battles of Mazar-i-Sharif (1997–98). Pakistan’s Chief of Army Staff, Pervez Musharraf, began sending thousands of Pakistanis to help the Taliban defeat the Northern Alliance. From 1996 to 2001, the al-Qaeda network of Osama bin Laden and Ayman al-Zawahiri was also operating inside Afghanistan. From 1990 to September 2001, around 400,000 Afghans died in the internal mini-wars. 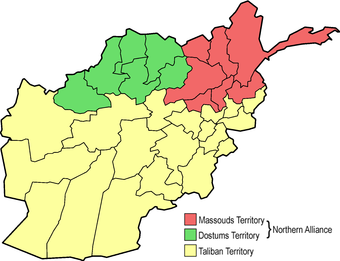 Islamic Emirate of Afghanistan: Map of the situation in Afghanistan in late 1996; Massoud (red), Dostum (green) and Taliban (yellow) territories.

On September 9, 2001, Massoud was assassinated by two Arab suicide attackers in Panjshir province of Afghanistan. Two days later, the September 11 attacks were carried out in the United States. The U.S. government suspected Osama bin Laden as the perpetrator of the attacks, and demanded that the Taliban hand him over. After refusing to comply, the October 2001 Operation Enduring Freedom was launched. During the initial invasion, U.S. and UK forces bombed al-Qaeda training camps. The United States began working with the Northern Alliance to remove the Taliban from power.

Fall of the Taliban: Continued Insurgency

In December 2001, after the Taliban government was overthrown and the new Afghan government under President Hamid Karzai was formed, the International Security Assistance Force (ISAF) was established by the UN Security Council to assist the Karzai administration and provide basic security. Taliban forces also began regrouping inside Pakistan, while more coalition troops entered Afghanistan and began rebuilding the war-torn country.

Shortly after their fall from power, the Taliban began an insurgency to regain control of Afghanistan. Over the next decade, ISAF and Afghan troops led many offensives against the Taliban but failed to fully defeat them. Afghanistan remains one of the poorest countries in the world due to a lack of foreign investment, government corruption, and the Taliban insurgency.