The United States and the Mujahideen

34.6.4: The United States and the Mujahideen

The United States viewed the conflict in Afghanistan as an integral Cold War struggle, and the CIA provided assistance to anti-Soviet mujahideen rebels through the Pakistani intelligence services in a program called Operation Cyclone.

Discuss the ties between the United States and the mujahideen

Reagan Doctrine
A strategy orchestrated and implemented by the United States under the Reagan Administration to overwhelm the global influence of the Soviet Union in an attempt to end the Cold War. Under this doctrine, the United States provided overt and covert aid to anti-communist guerrillas and resistance movements to “roll back” Soviet-backed communist governments in Africa, Asia, and Latin America.
Operation Cyclone
The code name for the United States Central Intelligence Agency (CIA) program to arm and finance the Jihadi warriors, mujahideen, in Afghanistan from 1979 to 1989, prior to and during the military intervention by the USSR in support of its client, the Democratic Republic of Afghanistan.
mujahideen
The term for one engaged in Jihad. In English usage, it originally referred to the guerrilla type military outfits led by the Muslim Afghan warriors in the Soviet–- War, but now may refer to jihadist outfits in other countries.

American President Jimmy Carter was surprised by the Soviet invasion of Afghanistan, as the consensus of the U.S. intelligence community during 1978 and 1979—reiterated as late as September 29, 1979—was that “Moscow would not intervene in force even if it appeared likely that the Khalq government was about to collapse.” Indeed, Carter’s diary entries from November 1979 until the Soviet invasion in late December contain only two short references to Afghanistan, and are instead preoccupied with the ongoing hostage crisis in Iran. Despite the focus on Iran, Carter had authorized a collaboration between the CIA and Pakistan’s Inter-Services Intelligence (ISI), and through the ISI, the CIA began providing $500,000 worth of non-lethal assistance to the mujahideen on July 3, 1979—several months before the Soviet invasion.

In the aftermath of the invasion, Carter was determined to respond vigorously to what he considered a dangerous provocation. In a televised speech, he announced sanctions on the Soviet Union, promised renewed aid to Pakistan, and committed the United States to the Persian Gulf’s defense. Carter also called for a boycott of the 1980 Summer Olympics in Moscow, which raised a bitter controversy.

The thrust of U.S. policy for the duration of the war was determined by Carter in early 1980 when he initiated a program to arm the mujahideen through Pakistan’s ISI and secured a pledge from Saudi Arabia to match U.S. funding for this purpose. U.S. support for the mujahideen accelerated under Carter’s successor, Ronald Reagan, at a final cost to U.S. taxpayers of some $3 billion.

Operation Cyclone was the code name for the United States Central Intelligence Agency (CIA) covert program to arm and finance the Jihadi warriors, mujahideen, in Afghanistan from 1979 to 1989, prior to and during the military intervention by the USSR in support of its client, the Democratic Republic of Afghanistan. The program leaned heavily toward supporting militant Islamic groups that were favored by the regime of Muhammad Zia-ul-Haq in neighboring Pakistan, rather than less ideological Afghan resistance groups that had been fighting the Marxist-oriented Democratic Republic of Afghanistan regime since before the Soviet intervention. Operation Cyclone was one of the longest and most expensive covert CIA operations ever undertaken. Funding began with $20–$30 million per year in 1980 and rose to $630 million per year in 1987. Funding continued after 1989 as the mujahideen battled the forces of Mohammad Najibullah’s PDPA during the civil war in Afghanistan (1989–1992).

President Reagan greatly expanded the program as part of the Reagan Doctrine of aiding anti-Soviet resistance movements abroad. To execute this policy, Reagan deployed CIA Special Activities Division paramilitary officers to equip the mujihadeen forces against the Soviet Army. Although the CIA and Texas Congressman Charlie Wilson received the most attention for their roles, the key architect of the strategy was Michael G. Vickers, a young CIA paramilitary officer working for Gust Avrakotos, the CIA’s regional head who had a close relationship with Wilson. Vicker’s strategy was to use a broad mix of weapons, tactics, logistics, and training programs to enhance the rebels’ ability to fight a guerrilla war against the Soviets. Reagan’s program assisted in ending the Soviet’s occupation in Afghanistan.

The United States offered two packages of economic assistance and military sales to support Pakistan’s role in the war against the Soviet troops in Afghanistan. The first six-year assistance package (1981–87) amounted to $3.2 billion, equally divided between economic assistance and military sales. The U.S. also sold 40 F-16 aircraft to Pakistan during 1983–87 at a cost of $1.2 billion outside the assistance package. The second six-year assistance package (1987–93) amounted to $4.2 billion. Out of this, $2.28 billion was allocated for economic assistance in the form of grants or loan that carried the interest rate of 2–3 percent. The rest of the allocation ($1.74 billion) was in the form of credit for military purchases. More than $20 billion in U.S. funds was funneled into the country to train and arm the Afghan resistance groups. The support proved vital to the mujahideen’s efforts against the Soviets.

The U.S.-built Stinger antiaircraft missile, supplied to the mujahideen in very large numbers beginning in 1986, struck a decisive blow to the Soviet war effort as it allowed the lightly armed Afghans to effectively defend against Soviet helicopter landings in strategic areas. The Stingers were so renowned and deadly that in the 1990s, the United States conducted a “buy-back” program to keep unused missiles from falling into the hands of anti-American terrorists. This program may have been covertly renewed following the U.S. intervention in Afghanistan in late 2001 out of fear that remaining Stingers could be used against U.S. forces in the country.

The Soviets were unable to quell the insurgency and withdrew from Afghanistan in 1989, precipitating the dissolution of the Soviet Union. However, the decision to route U.S. aid through Pakistan led to massive fraud as weapons sent to Karachi were frequently sold on the local market rather than delivered to the Afghan rebels. Karachi soon “became one of the most violent cities in the world.” Pakistan also controlled which rebels received assistance. Of the seven mujahideen groups supported by Zia’s government, four espoused Islamic fundamentalist beliefs—and these fundamentalists received most of the funding.

Conspiracy theorists have alleged that Osama bin Laden and al Qaeda were beneficiaries of CIA assistance. This is refuted by experts such as Steve Coll—who notes that declassified CIA records and interviews with CIA officers do not support such claims—and Peter Bergen, who concludes: “The theory that bin Laden was created by the CIA is invariably advanced as an axiom with no supporting evidence.” U.S. funding went to the Afghan mujahideen, not the Arab volunteers who arrived to assist them. 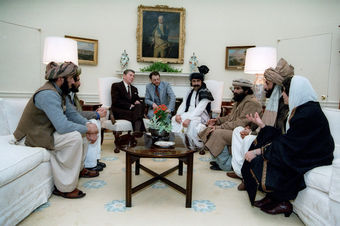 Reagan and the Mujahideen: President Reagan meeting with Afghan mujahideen leaders in the Oval Office in 1983