The Soviet Invasion of Afghanistan

34.6.3: The Soviet Invasion of Afghanistan

Review the Soviet invasion of Afghanistan and the challenges it faced

Babrak Karmal
An Afghan politician installed as president of Afghanistan by the USSR when they invaded in 1979. Policy failures and the stalemate that ensued after the Soviet intervention led the Soviet leadership to become highly critical of his leadership. Under Mikhail Gorbachev, the Soviet Union deposed him and replaced him with Mohammad Najibullah.
KGB
The main security agency for the Soviet Union from 1954 until its break-up in 1991, acting as internal security, intelligence, and secret police.
People’s Democratic Party of Afghanistan (PDPA)
A socialist party established on January 1, 1965. While a minority, the party helped former prime minister of Afghanistan, Mohammed Daoud Khan, overthrow his cousin, Mohammed Zahir Shah, and established the Republic of Afghanistan. Later in 1978 this party, with help from the Afghan National Army, seized power from Daoud in what is known as the Saur Revolution.

Prior to the arrival of Soviet troops, the People’s Democratic Party of Afghanistan (PDPA) took power after a 1978 coup, installing Nur Mohammad Taraki as president. The party initiated a series of radical modernization reforms throughout the country that were deeply unpopular, particularly among the more traditional rural population and the established power structures. The government vigorously suppressed any opposition and arrested thousands, executing as many as 27,000 political prisoners. Anti-government armed groups were formed, and by April 1979 large parts of the country were in open rebellion. The government itself was highly unstable with in-party rivalry, and in September 1979 the president was deposed by followers of Hafizullah Amin, who then became president.

Based on information from the KGB, Soviet leaders felt that Prime Minister Hafizullah Amin’s actions had destabilized the situation in Afghanistan. Following his initial coup against and killing of President Taraki, the KGB station in Kabul warned Moscow that Amin’s leadership would lead to “harsh repressions, and as a result, the activation and consolidation of the opposition.”

Despite earlier commitments to not intervene in Afghanistan, as the situation continued to deteriorate from May–December 1979, Moscow changed its mind on dispatching Soviet troops. The reasons for this turnabout are not entirely clear, and several speculative arguments include the grave internal situation and inability for the Afghan government to quell the rebellion; the effects of the Iranian Revolution that brought an Islamic theocracy into power, leading to fears that religious fanaticism would spread through Afghanistan and into Soviet Muslim Central Asian republics; and the deteriorating ties with the United States. Conservatives believe that this process was reflective of growing Soviet political influence in the world and that Soviet intervention in Afghanistan in December 1979 was an attempt to preserve, stabilize, and militarily intervene on behalf of the communist regime and thus improve their own political standing.

On October 31, 1979, Soviet informants to the Afghan Armed Forces, under orders from the inner circle of advisers under Soviet premier Brezhnev, relayed information for them to undergo maintenance cycles for their tanks and other crucial equipment. Meanwhile, telecommunications links to areas outside of Kabul were severed, isolating the capital. With a deteriorating security situation, large numbers of Soviet Airborne Forces joined stationed ground troops and began to land in Kabul on December 25. Simultaneously, Amin moved the offices of the president to the Tajbeg Palace, believing this location to be more secure from possible threats. According to Colonel General Tukharinov and Merimsky, Amin was fully informed of the military movements, having requested Soviet military assistance to northern Afghanistan on December 17. His brother and General Dmitry Chiangov met with the commander of the 40th Army before Soviet troops entered the country to work out their initial routes and locations.

That operation began at 7 p.m. when the KGB-led Soviet Zenith Group destroyed Kabul’s communications hub, paralyzing Afghan military command. At 7:15, the assault on Tajbeg Palace began; as planned, president Hafizullah Amin was killed. Simultaneously, other objectives were occupied. The operation was fully complete by the morning of December 28, 1979.

A Soviet-organized government, led by Parcham’s Babrak Karmal but inclusive of both factions, filled the vacuum. Soviet troops were deployed to stabilize Afghanistan under Karmal in substantial numbers, although the Soviet government did not expect to do most of the fighting in Afghanistan. As a result, however, the Soviets were now directly involved in what had been a domestic war . 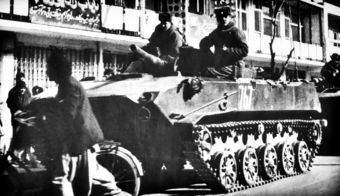 Soviet Invasion of Afghanistan: Soviet paratroopers aboard a BMD-1 tank in Kabul.

Foreign ministers from 34 Islamic nations adopted a resolution that condemned the Soviet intervention and demanded “the immediate, urgent and unconditional withdrawal of Soviet troops” from the Muslim nation of Afghanistan. The UN General Assembly passed a resolution protesting the Soviet intervention in Afghanistan by a vote of 104–18. According to political scientist Gilles Kepel, the Soviet intervention or “invasion” was “viewed with horror” in the West, considered a “fresh twist” on the geo-political “Great Game” of the 19th Century in which Britain feared that Russia sought access to the Indian Ocean and posed “a threat to Western security,” explicitly violating “the world balance of power agreed upon at Yalta” in 1945.

Soviet troops occupied the cities and main arteries of communication, while the mujahideen waged guerrilla war in small groups in the almost 80 percent of the country that escaped government and Soviet control. Soviets used their air power to deal harshly with both rebels and civilians, leveling villages to deny safe haven to the enemy, destroying vital irrigation ditches, and laying millions of land mines.

The Soviets did not foresee taking on such an active role in fighting the rebels and attempted to downplay their involvement as light assistance to the Afghan army. However, the arrival of the Soviets had the opposite effect as it incensed instead of pacified the people, causing the mujahideen to gain in strength and numbers. Originally the Soviets thought their forces would strengthen the backbone of the Afghan army and provide assistance by securing major cities, lines of communication, and transportation. The Afghan army forces had a high desertion rate and were loath to fight, especially since the Soviet forces pushed them into infantry roles while they manned the armored vehicles and artillery.

The mujahideen favored sabotage operations such as damaging power lines, knocking out pipelines and radio stations, and blowing up government office buildings, air terminals, hotels, cinemas, and so on. In the border region with Pakistan, the mujahideen would often launch 800 rockets per day. Between April 1985 and January 1987, they carried out over 23,500 shelling attacks on government targets. They concentrated on both civilian and military targets, knocking out bridges, closing major roads, attacking convoys, disrupting the electric power system and industrial production, and attacking police stations and Soviet military installations and air bases. They assassinated government officials and PDPA members and laid siege to small rural outposts.

By the mid-1980s, the Soviet contingent was increased to 108,800 and fighting increased throughout the country, but the military and diplomatic cost of the war to the USSR was high. By mid-1987 the Soviet Union, now under reformist leader Mikhail Gorbachev, announced it would start withdrawing its forces. The final troop withdrawal started on May 15, 1988, and ended on February 15, 1989. Due to its length, it has sometimes been referred to as the “Soviet Union’s Vietnam War” by the Western media, and is thought to be a contributing factor to the fall of the Soviet Union.