Mohammad Sardar Daoud Khan, who was the former Prime Minister of Afghanistan, seized power in a 1973 coup and became Afghanistan’s first president, making plans to diminish the nation’s relationships with the Soviet Union and instead forge closer contacts with the West.

Mohammad Sardar Daoud Khan
The Prime Minister of Afghanistan from 1953 to 1963 who later became the first President of Afghanistan. He overthrew the Musahiban monarchy of his first cousin Mohammed Zahir Shah and declared himself as the first President of Afghanistan from 1973 until his assassination in 1978 as a result of the Saur Revolution led by the People’s Democratic Party of Afghanistan (PDPA). He was known for his progressive policies, his efforts for the improvement of women’s rights, and for initiating two five-year modernization plans that increased the labor force by about 50 percent.
Leonid Brezhnev
The General Secretary of the Central Committee (CC) of the Communist Party of the Soviet Union (CPSU), presiding over the country from 1964 until his death in 1982. His 18-year term as General Secretary was second only to that of Joseph Stalin in duration. During his rule, the global influence of the Soviet Union grew dramatically, in part because of the expansion of the Soviet military during this time. His tenure as leader was marked by the beginning of an era of economic and social stagnation in the Soviet Union.
Saur Revolution
A revolution led by the People’s Democratic Party of Afghanistan (PDPA) against the rule of self-proclaimed Afghan President Mohammed Daoud Khan on April 27-28, 1978. It led to civil war and the intervention of the Soviet Union.

Amid charges of corruption and malfeasance against the royal family and poor economic conditions created by the severe 1971–72 drought, former Prime Minister Mohammad Sardar Daoud Khan seized power in a non-violent coup on July 17, 1973, while Zahir Shah was receiving treatment for eye problems and therapy for lumbago in Italy. Daoud abolished the monarchy, abrogated the 1964 constitution, and declared Afghanistan a republic with himself as its first President and Prime Minister. To counteract his previous mishaps as Prime Minister, Daud led Afghanistan back towards independence and non-alignment. Additionally, Daud sent troops as well as diplomats to surrounding nations to build up foreign relations and decrease Afghanistan’s dependence on the Soviet Union.

President Daoud met Leonid Brezhnev on a state visit to Moscow from April 12 to 15, 1977. Daoud asked for a private meeting with the Soviet leader to discuss the increased pattern of Soviet actions in Afghanistan. In particular, he discussed the intensified Soviet attempt to unite the two factions of the Afghan communist parties, Parcham and Khalq. Brezhnev described Afghanistan’s non-alignment as important to the USSR and essential to the promotion of peace in Asia, but warned him about the presence of experts from NATO countries stationed in the northern parts of Afghanistan. Daoud bluntly replied that Afghanistan would remain free, and that the Soviet Union would never be allowed to dictate how the country should be governed.

After returning to Afghanistan, Daoud made plans to diminish his government’s relationships with the Soviet Union, and instead forge closer contacts with the West as well as oil-rich Saudi Arabia and Iran. Afghanistan signed a cooperative military treaty with Egypt and by 1977, the Afghan military and police force were being trained by Egyptian Armed forces. This angered the Soviet Union because Egypt took the same route in 1974 and distanced itself from the Soviets.

During Daoud’s presidency, relations with the Soviet Union continually deteriorated. The Soviets saw his shift to a more Western-friendly leadership as dangerous, including criticism of Cuba’s membership in the Non-aligned Movement and the expulsion of Soviet military and economic advisers. The suppression of political opposition furthermore turned the Soviet-backed People’s Democratic Party (PDPA), an important ally in the 1973 coup against the king, against him.

In 1976, Daoud established a seven-year economic plan for the country. He started military training programs with India and commenced economic development talks with Imperial Iran. Daoud also turned his attention to oil-rich Middle Eastern nations such as Saudi Arabia, Iraq, Kuwait, and others for financial assistance.

Daoud had however achieved little of what he had set out to accomplish in 1978. The Afghan economy hadn’t made any real progress and the Afghan standard of living had not risen. Daoud also garnered much criticism for his single party constitution in 1977, which alienated him from his political supporters. By this time, the two main factions of the PDPA, previously locked in a power struggle, had reached a fragile agreement for reconciliation. Communist-sympathizing army officials were already planning a move against the government. According to Hafizullah Amin, who became Afghan head of state in 1979, the PDPA started plotting the coup in 1976, two years before it materialized.

In April 1978, the communist PDPA seized power in Afghanistan in the Saur Revolution. Within months, opponents of the communist government launched an uprising in eastern Afghanistan that quickly expanded into a civil war waged by guerrilla mujahideen against government forces countrywide. The Pakistani government provided these rebels with covert training centers, while the Soviet Union sent thousands of military advisers to support the PDPA government. Meanwhile, increasing friction between the competing factions of the PDPA — the dominant Khalq and the more moderate Parcham — resulted in the dismissal of Parchami cabinet members and the arrest of Parchami military officers under the pretext of a Parchami coup.

In September 1979, Nur Muhammad Taraki, the leader of PDPA, was assassinated in a coup within the PDPA orchestrated by fellow Khalq member Hafizullah Amin, who assumed the presidency. During his short stay in power (104 days), Amin became committed to establishing a collective leadership. When Taraki was ousted, Amin promised “from now on there will be no one-man government …” Attempting to pacify the population, he released a list of 18,000 people who had been executed and blamed the executions on Taraki. Amin was disliked by the Afghan people. During his rule, opposition to the communist regime increased and the government lost control over the countryside. The state of the Afghan military deteriorated under Amin; due to desertions, the number of military personnel in the Afghan army decreased from 100,000 in the immediate aftermath of the Saur Revolution to somewhere between 50,000 and 70,000.

Meanwhile in the Soviet Union, the Special Commission of the Politburo on Afghanistan, consisting of Yuri Andropov, Andrei Gromyko, Dmitriy Ustinov, and Boris Ponomarev, wanted to end the impression that the Soviet government supported Amin’s leadership and policies.

Amin remained trustful of the Soviet Union until the very end, despite the deterioration of official relations with the Soviet Union. When the Afghan intelligence service handed Amin a report that the Soviet Union would invade the country and topple him, Amin claimed the report was a product of imperialism. 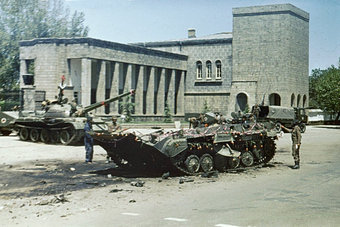 Saur Revolution: The day after the Marxist revolution on April 28, 1978.