European Influence on the Ottomans

34.1.2: European Influence on the Ottomans

The “Eastern Question” refers to the strategic competition, often involving armed conflicts, between the European Powers during the slow, steady disintegration of the Ottoman Empire.

Greek War of Independence
A successful war of independence waged by the Greek revolutionaries between 1821 and 1832 against the Ottoman Empire. The Greeks were later assisted by the Russian Empire, Great Britain, the Kingdom of France, and several other European powers, while the Ottomans were aided by their vassals, the eyalets of Egypt, Algeria, and Tripolitania, and the Beylik of Tunis.
Concert of Europe
A system of dispute resolution adopted by the major conservative powers of Europe to maintain their power, oppose revolutionary movements, weaken the forces of nationalism, and uphold the balance of power. It operated in Europe from the end of the Napoleonic Wars (1815) to the early 1820s.
Crimean War
A military conflict fought from October 1853 to March 1856 in which the Russian Empire lost to an alliance of France, Britain, the Ottoman Empire, and Sardinia. The immediate cause involved the rights of Christian minorities in the Holy Land, which was a part of the Ottoman Empire.
Eastern Question
In diplomatic history, this refers to the strategic competition and political considerations of the European Great Powers in light of the political and economic instability in the Ottoman Empire from the late 18th to early 20th centuries.

The Ottoman Empire was a crucial part of the European states system and actively played a role in their affairs, due in part to their coterminous periods of development. In diplomatic history, the “Eastern Question” refers to the strategic competition and political considerations of the European Great Powers in light of the political and economic instability in the Ottoman Empire from the late 18th to early 20th centuries. Characterized as the “sick man of Europe,” the empire’s weakened military in the second half of the 18th century threatened to undermine the fragile balance of power largely shaped by the Concert of Europe. The Eastern Question encompassed myriad interrelated elements: Ottoman military defeats, Ottoman institutional insolvency, the ongoing Ottoman political and economic modernization program, the rise of ethno-religious nationalism in its provinces, and Great Power rivalries.

The Eastern Question is normally dated to 1774, when the Russo-Turkish War (1768–74) ended in defeat for the Ottomans. As the dissolution of the Ottoman Empire was thought to be imminent, the European powers engaged in a power struggle to safeguard their military, strategic, and commercial interests in the Ottoman domains. Imperial Russia stood to benefit from the decline of the Ottoman Empire; on the other hand, Austria-Hungary and Great Britain deemed the preservation of the Empire to be in their best interests. The Eastern Question was put to rest after World War I, one of the outcomes of which was the collapse and division of the Ottoman holdings.

Russian Influence on the Ottomans

The Eastern Question became a major European issue when the Greeks declared independence from the Ottomans in 1821. It was at about this time that the phrase “Eastern Question” was coined. Ever since the defeat of Napoleon in 1815, there were rumors that the Emperor of Russia sought to invade the Ottoman Empire, and the Greek Revolt seemed to make an invasion even more likely. The British foreign minister, Robert Stewart, Viscount Castlereagh, as well as the Austrian foreign minister, Metternich, counselled the Emperor of Russia, Alexander I, not to enter the war. Instead, they pleaded that he maintain the Concert of Europe (the spirit of broad collaboration in Europe which had persisted since Napoleon’s defeat).

As the war continued into 1829, Russia gained a firm advantage over the Ottoman Empire. By prolonging hostilities further, however, Russia would have invited Austria to enter the war, causing considerable suspicion in Britain. Therefore, for the Russians to continue with the war in hopes of destroying the Ottoman Empire would have been inexpedient. At this stage, the King of France, Charles X, proposed the partition of the Ottoman Empire among Austria, Russia, and others, but his scheme was presented too late to produce a result.

Thus, Russia was able to secure neither a decisive defeat nor a partition of the Ottoman Empire and chose instead to degrade it to a mere dependency. In 1829, the Emperor of Russia concluded the Treaty of Adrianople with the Sultan; his empire was granted additional territory along the Black Sea, Russian commercial vessels were granted access to the Dardanelles, and the commercial rights of Russians in the Ottoman Empire were enhanced. The Greek War of Independence was terminated shortly thereafter as Greece was granted independence by the Treaty of Constantinople in 1832. 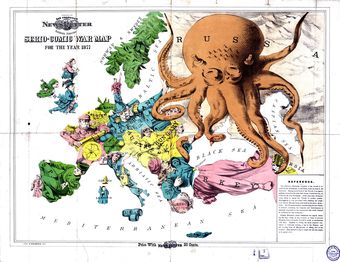 “The Russian Menace”: a Serio-Comic War Map for the Year 1877.” An English cartoon from 1877 showing Russia as a monstrous octopus devouring neighbouring lands, especially the Ottoman Empire. During much of the 19th century, Russia had considerable influence over the Ottomans.

The Crimean War (1853–1856) was part of this long-running contest between the major European powers for influence over territories of the declining Ottoman Empire. It ended when the Russian Empire lost to an alliance of France, Britain, the Ottoman Empire, and Sardinia. The immediate cause was the rights of Christian minorities in the Holy Land, part of the Ottoman Empire. The French promoted the rights of Roman Catholics while Russia promoted those of the Eastern Orthodox Church. The longer-term causes were the decline of the Ottoman Empire and the unwillingness of Britain and France to allow Russia to gain territory and power at Ottoman expense.

The conflict began during the 1850s with a religious dispute. Under treaties negotiated during the 18th century, France was the guardian of Roman Catholics in the Ottoman Empire while Russia was the protector of Orthodox Christians. For several years, however, Catholic and Orthodox monks had disputed possession of the Church of the Nativity and the Church of the Holy Sepulchre in Palestine. During the early 1850s, the two sides made demands which the Sultan could not possibly satisfy simultaneously. In 1853, the Sultan adjudicated in favor of the French, despite the vehement protestations of the local Orthodox monks.

Germany and the Ottoman Empire

Germany drew away from Russia and became closer to Austria-Hungary, with whom she concluded the Dual Alliance in 1879. Germany also closely allied with the Ottoman Empire and reorganized the Ottoman military and financial system; in return, it received several commercial concessions, including permission to build the Baghdad Railway, which secured them access to several important economic markets and had the potential for German entry into the Persian Gulf area controlled by Britain. Germany was driven not only by commercial interests, but also by an imperialistic and militaristic rivalry with Britain. Meanwhile, Britain agreed to the Entente Cordiale with France in 1904, thereby resolving differences between the two countries over international affairs. Britain also reconciled with Russia in 1907 with the Anglo-Russian Entente.

The continuing collapse of the Ottoman Empire led to two wars in the Balkans, in 1912 and 1913, which were a prelude to world war. By 1900 nation states had formed in Bulgaria, Greece, Montenegro, and Serbia, but many of their ethnic compatriots lived under the control of the Ottoman Empire. In 1912, these countries formed the Balkan League. There were three main causes of the First Balkan War. The Ottoman Empire was unable to reform itself, govern satisfactorily, or deal with the rising ethnic nationalism of its diverse peoples. Second, the Great Powers quarreled among themselves and failed to ensure that the Ottomans would carry out the needed reforms. This led the Balkan states to impose their own solution. Most important, the members of the Balkan League were confident that it could defeat the Turks. Their prediction was accurate, as Constantinople called for terms after six weeks of fighting.

The First Balkan War broke out when the League attacked the Ottoman Empire on October 8, 1912 and was ended seven months later by the Treaty of London. After five centuries, the Ottoman Empire lost virtually all of its possessions in the Balkans.