After a long decline since the 19th century, the Ottoman Empire came to an end in the aftermath of its defeat in World War I when it was dismantled by the Allies after the war ended in 1918.

Explain why the Ottoman Empire lost power and prestige

Turkish War of Independence
A war fought between the Turkish nationalists and the proxies of the Allies – namely Greece on the Western front, Armenia on the Eastern, France on the Southern and with them, the United Kingdom and Italy in Constantinople (now Istanbul) – after some parts of Turkey were occupied and partitioned following the Ottoman Empire’s defeat in World War I. It resulted in the founding of the Republic of Turkey in the Anatolian heartland and the abolition of the Ottoman monarchy and caliphate.
Tanzimat
Literally meaning “reorganization,” a period of reformation in the Ottoman Empire that began in 1839 and ended with the First Constitutional Era in 1876. This era was characterized by various attempts to modernize the Ottoman Empire and secure its territorial integrity against nationalist movements from within and aggressive powers from outside of the state.
Young Turks
A political reform movement in the early 20th century that consisted of Ottoman exiles, students, civil servants, and army officers. They favored the replacement of the Ottoman Empire’s absolute monarchy with a constitutional government. Later, their leaders led a rebellion against the absolute rule of Sultan Abdul Hamid II in the 1908 Young Turk Revolution. With this revolution, they helped to establish the Second Constitutional Era in 1908, ushering in an era of multi-party democracy for the first time in the country’s history.

The Ottoman Empire, also known as the Turkish Empire, was founded at the end of the 13th century in northwestern Anatolia in the vicinity of Bilecik and Söğüt by the Oghuz Turkish tribal leader Osman. After 1354, the Ottomans crossed into Europe, and with the conquest of the Balkans the Ottoman Beylik was transformed into a transcontinental empire. The Ottomans ended the Byzantine Empire with the 1453 conquest of Constantinople by Mehmed the Conqueror.

During the 16th and 17th centuries, at the height of its power under the reign of Suleiman the Magnificent, the Ottoman Empire was a multinational, multilingual empire controlling much of Southeast Europe, Western Asia, the Caucasus, North Africa, and the Horn of Africa. At the beginning of the 17th century, the empire contained 32 provinces and numerous vassal states. Some were later absorbed into the Ottoman Empire, while others were granted various types of autonomy during the course of centuries.

With Constantinople as its capital and control of lands around the Mediterranean basin, the Ottoman Empire was at the center of interactions between the Eastern and Western worlds for six centuries. The Ottomans consequently suffered severe military defeats in the late 18th and early 19th centuries, which prompted them to initiate a comprehensive process of reform and modernization known as the Tanzimat. The empire allied with Germany in the early 20th century and joined World War I with the imperial ambition of recovering its lost territories.

The Empire’s defeat and the occupation of part of its territory by the Allied Powers in the aftermath of World War I resulted in its partitioning and the loss of its Middle Eastern territories, which were divided between the United Kingdom and France. The successful Turkish War of Independence against the occupying Allies led to the emergence of the Republic of Turkey in the Anatolian heartland and the abolition of the Ottoman monarchy and caliphate.

Beginning in the late 18th century, the Ottoman Empire faced challenges defending itself against foreign invasion and occupation. In response to these threats, the empire initiated a period of tremendous internal reform which came to be known as the Tanzimat. This succeeded in significantly strengthening the Ottoman central state, despite the empire’s precarious international position. Over the course of the 19th century, the Ottoman state became increasingly powerful and rationalized, exercising a greater degree of influence over its population than in any previous era. The process of reform and modernization in the empire began with the declaration of the Nizam-ı Cedid (New Order) during the reign of Sultan Selim III (r. 1789-1807) and was punctuated by several reform decrees, such as the Hatt-ı Şerif of Gülhane in 1839 and the Hatt-ı Hümayun in 1856. By the end of this period in 1908, the Ottoman military was somewhat modernized and professionalized according to the model of Western European Armies.

During the Tanzimat period, the government’s series of constitutional reforms led to a fairly modern conscripted army, banking system reforms, the decriminalization of homosexuality, and the replacement of religious law with secular law and guilds with modern factories.

Instead, this period became the story of the twilight struggle of the Empire. The Second Constitutional Era began after the Young Turk Revolution (July 3, 1908) with the sultan’s announcement of the restoration of the 1876 constitution and the reconvening of the Ottoman Parliament. This era is dominated by the politics of the Committee of Union and Progress (CUP) and the movement that would become known as the Young Turks. Although it began as a uniting progressive party, the CUP splintered in 1911 with the founding of the opposition Freedom and Accord Party (Liberal Union or Entente), which poached many of the more liberal Deputies from the CUP. The remaining CUP members, who now took a more dominantly nationalist tone in the face of the enmity of the Balkan Wars, dueled Freedom and Accord in a series of power reversals that ultimately led to the CUP seizing power from the Freedom and Accord in the 1913 Ottoman coup d’état and establishing total dominance over Ottoman politics until the end of World War I.

The Young Turk government had signed a secret treaty with Germany and established the Ottoman-German Alliance in August 1914, aimed against the common Russian enemy but aligning the Empire with the German side. The Ottoman Empire entered World War I after the Goeben and Breslau incident, in which it gave safe harbor to two German ships that were fleeing British ships. These ships, officially transferred to the Ottoman Navy, but effectively still under German control, attacked the Russian port of Sevastopol, thus dragging the Empire into the war on the side of the Central Powers in the Middle Eastern theater.

The Ottoman involvement World War I in the Middle Eastern ended with the the Arab Revolt in 1916. This revolt turned the tide against the Ottomans at the Middle Eastern front, where they initially seemed to have the upper hand during the first two years of the war. When the Armistice of Mudros was signed on October 30, 1918, the only parts of the Arabian peninsula still under Ottoman control were Yemen, Asir, the city of Medina, portions of northern Syria, and portions of northern Iraq. These territories were handed over to the British forces on January 23, 1919. The Ottomans were also forced to evacuate the parts of the former Russian Empire in the Caucasus (in present-day Georgia, Armenia, and Azerbaijan), which they had gained towards the end of World War I after Russia’s retreat from the war with the Russian Revolution in 1917.

The occupations of Constantinople and Smyrna mobilized the Turkish national movement, which ultimately won the Turkish War of Independence. The formal abolition of the Ottoman Sultanate was performed by Grand National Assembly of Turkey on November 1, 1922. The Sultan was declared persona non grata and exiled from the lands that the Ottoman Dynasty ruled since 1299. 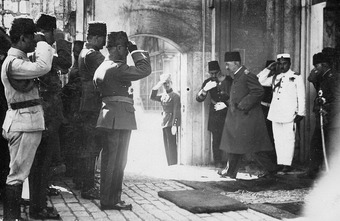