Fall of the Berlin Wall

A relaxing of Eastern bloc border defenses initiated a chain of events that pressured the East German government into opening crossing points between East and West Berlin to political refugees, precipitating the eventual fall of the Berlin Wall.

fakir beds
Essentially, a bed of nails used as a deterrent to vehicle or foot crossing of an expanse.
defection
In politics, a person who gives up allegiance to one state in exchange for allegiance to another in a way that is considered illegitimate by the first state.

The Berlin Wall was a barrier that divided Berlin from 1961 to 1989. Constructed by the German Democratic Republic (GDR, or East Germany) beginning August 13, 1961, the Wall completely cut off West Berlin by land from East Germany and East Berlin. The barrier included guard towers placed along large concrete walls, which circumscribed a wide area that contained anti-vehicle trenches, fakir beds, and other defenses. The Eastern Bloc claimed the Wall was erected to protect its population from fascist elements conspiring to prevent grassroots socialist state-building in East Germany. But in practice, the Wall served to prevent massive emigration and defection that plagued East Germany and the communist Eastern Bloc during the post-World War II period. 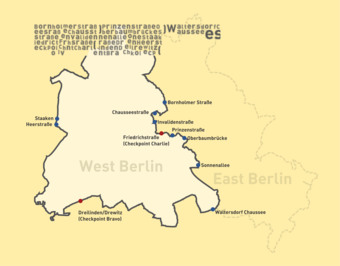 Berlin Wall Map: Map of the location of the Berlin Wall, showing checkpoints.

The Fall of the Wall

When Hungary disabled its physical border defenses with Austria on August 19, 1989, it initiated a chain of events that would eventually precipitate the fall of the Berlin Wall. In September 1989, more than 13,000 East German tourists escaped through Hungary to Austria. The Hungarians prevented many more East Germans from crossing the border and returned them to Budapest. Those East Germans then flooded the West German embassy and refused to return to East Germany. The East German government responded to this by disallowing any further travel to Hungary, but allowed those already there to return to East Germany.

Soon, a similar pattern began to emerge out of Czechoslovakia. This time, however, the East German authorities allowed people to leave, provided that they did so by train through East Germany. This was followed by mass demonstrations within East Germany itself. Initially, protesters were mostly people wanting to leave to the West, chanting “Wir wollen raus!” (“We want out!”). Then protesters began to chant “Wir bleiben hier!” (“We are staying here!”). This was the start of what East Germans call the Peaceful Revolution of late 1989. Protest demonstrations grew considerably by early November, and the movement neared its height on November 4, when half a million people gathered to demand political change at the Alexanderplatz demonstration, East Berlin’s large public square and transportation hub.

The longtime leader of East Germany, Erich Honecker, resigned on October 18, 1989, and was replaced by Egon Krenz the same day. Honecker predicted in January of that year that the Wall would stand for 50 or 100 more years if the conditions that caused its construction did not change. The wave of refugees leaving East Germany for the West kept increasing. By early November, refugees were finding their way to Hungary via Czechoslovakia or the West German Embassy in Prague. This was tolerated by the new Krenz government due to long-standing agreements with the communist Czechoslovak government allowing free travel across their common border. However, this movement grew so large it caused difficulties for both countries. The Politburo led by Krenz thus decided on November 9 to allow refugees to exit directly via crossing points between East and West Germany, including between East and West Berlin. Later the same day, the ministerial administration modified the proposal to include private, round-trip travel. The new regulations were to take effect the next day.

Günter Schabowski, the party boss in East Berlin and the spokesman for the SED Politburo, had the task of announcing the new regulations but had not been involved in the discussions about the new regulations and was been fully updated. Shortly before a press conference on November 9, he was handed a note announcing the changes but given no further instructions on how to handle the information. These regulations had only been completed a few hours earlier and were to take effect the following day to allow time to inform the border guards. But this starting time delay was not communicated to Schabowski. At the end of the press conference, Schabowski read out loud the note he had been given. One of the reporters, ANSA’s Riccardo Ehrman, asked when the regulations would take effect. After a few seconds’ hesitation, Schabowski stated based on assumption that it would be immediate. After further questions from journalists, he confirmed that the regulations included border crossings through the Wall into West Berlin, which he had not mentioned until then.

Excerpts from Schabowski’s press conference were the lead story on West Germany’s two main news programs that night, meaning that the news was also broadcast to nearly all of East Germany. East Germans began gathering at the Wall at the six checkpoints between East and West Berlin, demanding that border guards immediately open the gates. The surprised and overwhelmed guards made many hectic telephone calls to their superiors about the problem. At first, they were ordered to find the more aggressive people gathered at the gates and stamp their passports with a special stamp that barred them from returning to East Germany—in effect, revoking their citizenship. However, this still left thousands demanding to be let through.

It soon became clear that no one among the East German authorities would take personal responsibility for issuing orders to use lethal force, so the vastly outnumbered soldiers had no way to hold back the huge crowd of East German citizens. Finally, at 10:45 pm, Harald Jäger, the commander of the Bornholmer Straße border crossing, yielded, allowing the guards to open the checkpoints and people to pass through with little to no identity checking. As the Ossis (“Easterners”) swarmed through, they were greeted by Wessis (“Westerners”) waiting with flowers and champagne amid wild rejoicing. Soon afterward, a crowd of West Berliners jumped on top of the Wall and were joined by East German youngsters. They danced together to celebrate their new freedom. 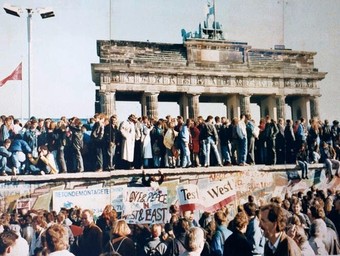 The Fall of the Berlin Wall: This photo shows part of the Wall at Brandenburg Gate, with Germans standing on top of the Wall days before it was torn down.

Television coverage of citizens demolishing sections of the Wall on November 9 was soon followed by the East German regime announcing ten new border crossings, including the historically significant locations of Potsdamer Platz, Glienicker Brücke, and Bernauer Straße. Crowds gathered on both sides of the historic crossings waiting for hours to cheer the bulldozers that tore down portions of the Wall to reinstate ancient roads. While the Wall officially remained guarded at a decreasing intensity, new border crossings continued for some time, including the Brandenburg Gate on December 22, 1989. Initially the East German military attempted to repair damage done by “Wall peckers,” but gradually these attempts ceased and guards became more lax, tolerating the demolitions and unauthorized border crossings through holes in the Wall.

West Germans and West Berliners were allowed visa-free travel starting December 23. Until that point, they were only able to visit East Germany and East Berlin under restrictive conditions that involved applying for a visa several days or weeks in advance and the obligatory exchange of at least 25 Deutsche Marks per day of their planned stay, which hindered spontaneous visits. Thus, in the weeks between November 9 and December 23, East Germans could actually travel more freely than Westerners.

On June 13, 1990, the East German military officially began dismantling the Wall, beginning in Bernauer Straße and around the Mitte district. From there, demolition continued through Prenzlauer Berg/Gesundbrunnen, Helligensee, and throughout the city of Berlin until that December. Various military units dismantled the Berlin/Brandenberg border wall, completing the job in November 1991. Virtually every road that was severed by the Berlin Wall was reconstructed and reopened by August 1, 1990.

On July 1, the day East Germany adopted West German currency, all de jure border controls ceased, although the inter-German border was meaningless for some time before that. The fall of the Wall marked the first critical step towards German reunification, which formally concluded a mere 339 days later on October 3, 1990, with the dissolution of East Germany and the official reunification of the German state along the democratic lines of the West German government.