Unrest in the Soviet Union

The increased freedoms of glasnost allowed opposition groups to make political gains against the centralized Soviet government in Moscow.

glasnost
Roughly translating to “openness”, this term refers to the reforms the political and judicial system made in the 1980s that ensured greater freedoms for the public and the press and increased government transparency.
sovereignty
The full right and power of a governing body to govern itself without interference from outside sources or bodies. In political theory, sovereignty is a substantive term designating supreme authority over some polity. It is a basic principle underlying the dominant Westphalian model of state foundation.

The Revolutions of 1989 were part of a revolutionary wave in the late 1980s and early 1990s that resulted in the end of communist rule in Central and Eastern Europe and beyond.

By the late 1980s, people in the Caucasus and Baltic states were demanding more autonomy from Moscow, and the Kremlin was losing some of its control over certain regions and elements in the Soviet Union. In November 1988, Estonia issued a declaration of sovereignty, which eventually led to other states doing the same. 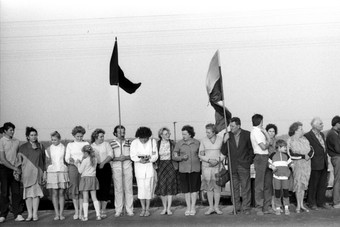 The Baltic Way, Lithuania, August 23, 1989: The Baltic Way was a human chain of approximately two million people dedicated to liberating the Baltic Republics from the USSR.

The Chernobyl disaster in April 1986 had major political and social effects that catalyzed the revolutions of 1989. It is difficult to establish the total economic cost of the disaster. According to Mikhail Gorbachev, the Soviet Union spent 18 billion rubles (the equivalent of USD $18 billion at the time) on containment and decontamination, virtually bankrupting itself. One political result of the disaster was the greatly increased significance of the Soviet policy of glasnost. Under glasnost, relaxation of censorship resulted in the Communist Party losing its grip on the media, and Soviet citizens were able to learn significantly more about the past and the outside world.

The Soviet media began to expose numerous social and economic problems in the Soviet Union that the government had long denied and covered up, such as poor housing, food shortages, alcoholism, widespread pollution, creeping mortality rates, the second-rate position of women, and the history of state crimes against the population. Although Nikita Khrushchev denounced Stalin’s personality cult as early as the 1950s, information about the true proportions of his atrocities had still been suppressed. These revelations had a devastating effect on those who believed in state communism and had never been exposed to this information, as the driving vision of society was built on a foundation of falsehood and crimes against humanity. Additionally, information about the higher quality of life in the United States and Western Europe and about Western pop culture were exposed to the Soviet public for the first time.

Political openness continued to produce unintended consequences. In elections to the regional assemblies of the Soviet Union’s constituent republics, nationalists swept the board. As Gorbachev weakened the system of internal political repression, the ability of the USSR’s central government to impose its will on the USSR’s constituent republics was largely undermined. During the 1980s, calls for greater independence from Moscow’s rule grew louder. This was especially marked in the Baltic Republics of Estonia, Lithuania, and Latvia, which had been annexed into the Soviet Union by Joseph Stalin in 1940. Nationalist sentiment also took hold in other Soviet republics such as Ukraine, Georgia, and Azerbaijan.

Starting in the mid-1980s, the Baltic states used the reforms provided by glasnost to assert their rights to protect their environment (for example during the Phosphorite War) and their historic monuments, and, later, their claims to sovereignty and independence. When the Balts withstood outside threats, they exposed an irresolute Kremlin. Bolstering separatism in other Soviet republics, the Balts triggered multiple challenges to the Soviet Union. The rise of nationalism under glasnost also reawakened simmering ethnic tensions throughout the union. For example, in February 1988, Nagorno-Karabakh, a predominantly ethnic Armenian region in Azerbaijan, passed a resolution calling for unification with Armenia, which sparked the Nagorno-Karabakh War.

Momentum toward full-blown revolution began in Poland in 1989. During the Polish United Workers’ Party’s (PZPR) plenary session of January 16-18, 1989, General Wojciech Jaruzelski and his ruling formation overcame the Central Committee’s resistance by threatening to resign. As a result, the communist party decided to allow relegalization of the independent trade union Solidarity and approach its leaders for formal talks. From February 6 to April 4, 94 sessions of talks between 13 working groups, known as the Round Table Talks, resulted in political and economic compromise reforms. The talks resulted in the Round Table Agreement, by which political power wound be vested in a newly created bicameral legislature and a president who would be the chief executive.

By April 4, 1989, numerous reforms and freedoms for the opposition were obtained. Solidarity, now in existence as the Solidarity Citizens’ Committee, would again be legalized as a trade union and allowed to participate in semi-free elections. The election had restrictions imposed designed to keep the communists in power, since only 35% of the seats in the Sejm, the key lower chamber of parliament, would be open to Solidarity candidates. The remaining 65% was reserved for candidates from the PZPR and its allies (the United People’s Party, the Alliance of Democrats, and the PAX Association). Since the Round Table Agreement mandated only reform (not replacement) of socialism in Poland, the communist party thought of the election as a way of neutralizing political conflict and staying in power while gaining legitimacy to carry out economic reforms. However, the negotiated social policy determinations by economists and trade unionists during the Round Table talks were quickly rejected by both the Party and the opposition.

A systemic transformation was made possible by the Polish legislative elections of June 4, 1989, which coincided with the bloody crackdown on the Tienanmen Square protesters in China. When polling results were released, a political earthquake erupted: Solidarity’s victory surpassed all predictions. Solidarity candidates captured all seats they were allowed to compete for in the Sejm, while in the newly established Senate they captured 99 out of the 100 available seats (the other seat went to an independent, who later switched to Solidarity). At the same time, many prominent PZPR candidates failed to gain even the minimum number of votes required to capture the seats that were reserved for them. The communists suffered a catastrophic blow to their legitimacy as a result.

Revolutionary momentum, encouraged by the peaceful transition underway in Poland, continued in Hungary, East Germany, Bulgaria, Czechoslovakia, and Romania. A common feature among these countries was the extensive use of campaigns of civil resistance, demonstrating popular opposition to the continuation of one-party rule and contributing to the pressure for change. Romania was the only Eastern Bloc country whose people overthrew its Communist regime violently. The Tienanmen Square protests of 1989 failed to stimulate major political changes in China, but powerful images of courageous defiance during that protest helped to spark a precipitation of events in other parts of the globe. Hungary dismantled its section of the physical Iron Curtain, leading to a mass exodus of East Germans through Hungary that destabilized East Germany. This led to mass demonstrations in cities such as Leipzig and subsequently to the fall of the Berlin Wall, which served as the symbolic gateway to German reunification in 1990.

The Soviet Union was dissolved by the end of 1991, resulting in 14 countries (Armenia, Azerbaijan, Belarus, Estonia, Georgia, Kazakhstan, Kyrgyzstan, Latvia, Lithuania, Moldova, Tajikistan, Turkmenistan, Ukraine, and Uzbekistan) declaring their independence from the Soviet Union in 1990-91. Lithuania was the first Union Republic to declare independence from the dissolving Soviet Union in the Act of the Re-Establishment of the State of Lithuania, signed by the Supreme Council of the Republic of Lithuania on March 11, 1990. The Act of the Re-Establishment of the State of Lithuania served as a model and inspiration to other Soviet republics. However, the issue of independence was not immediately settled and recognition by other countries was uncertain. The rest of the Soviet Union, which constituted the bulk of the area, became Russia in December 1991. 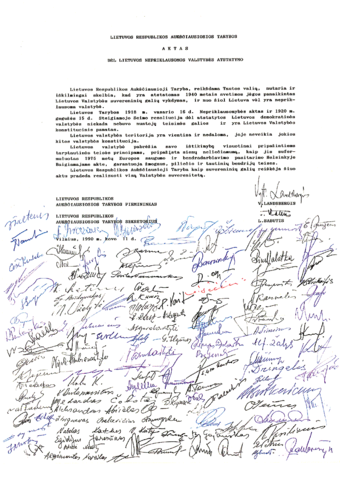 Act of Restoration of Independence of Lithuania, March 11, 1990: Act of the Re-Establishment of the State of Lithuania with signatures of the delegates.

Communism was abandoned in Albania and Yugoslavia between 1990 and 1992. By 1992, Yugoslavia split into the five successor states of Bosnia and Herzegovina, Croatia, the Macedonia, Slovenia, and the Federal Republic of Yugoslavia, which was later renamed Serbia and Montenegro and eventually split into two separate states,. Serbia then further split with the breakaway of the partially recognized state of Kosovo. Czechoslovakia was dissolved three years after the end of Communist rule, splitting peacefully into the Czech Republic and Slovakia in 1992. The impact was felt in dozens of Socialist countries. Communism was abandoned in countries such as Cambodia, Ethiopia, Mongolia (which democratically re-elected a Communist government that ran the country until 1996), and South Yemen. The collapse of Communism (and of the Soviet Union) led commentators to declare the end of the Cold War.

During the adoption of varying forms of market economies, there was initially a general decline in living standards. Political reforms were varied, but in only five countries were Communist parties able to keep for themselves a monopoly on power: China, Cuba, North Korea, Laos, and Vietnam. Many Communist and Socialist organisations in the West turned their guiding principles over to social democracy. Communist parties in Italy and San Marino suffered, and the renewal of the Italian political class took place in the early 1990s. The European political landscape was drastically changed, with numerous Eastern Bloc countries joining NATO and the European Union, resulting in stronger economic and social integration.