Gorbachev launched perestroika to rescue the Soviet economy from stagnation, but did not intend to abandon the centrally planned economy entirely.

glasnost
Roughly translating to “openness”, reforms to the political and judicial system made in the 1980s that ensured greater freedoms for the public and the press as well as increased government transparency.
perestroika
Literally “restructuring” in Russian, a political movement for reform within the Communist Party of the Soviet Union during the 1980s, widely associated with Soviet leader Mikhail Gorbachev.

Mikhail Sergeyevich Gorbachev was the eighth and final leader of the Soviet Union, General Secretary of the Communist Party of the Soviet Union (CPSU) from 1985 until 1991, when the party was dissolved. Gorbachev’s primary goal as general secretary was to revive the Soviet economy after the stagnant Brezhnev and interregnum years. In 1985, he announced that the economy was stalled and that reorganization was needed, proposing a vague program of reform that was adopted at the April Plenum of the Central Committee. His reforms called for fast-paced technological modernization and increased industrial and agricultural productivity. He also tried to make the Soviet bureaucracy more efficient.

Gorbachev soon came to believe that fixing the Soviet economy would be nearly impossible without also reforming the political and social structure of the Communist nation. He started by making personnel changes, most notably replacing Andrei Gromyko with Eduard Shevardnadze as Minister of Foreign Affairs. Gromyko had served at his post for 28 years and was considered a member of the old Soviet guard. Although Shevardnadze was comparatively inexperienced in diplomacy, he, like Gorbachev, had a background in managing an agricultural region of the Soviet Union (Georgia), which entailed weak links to the military-industrial complex, sharing Gorbachev’s outlook on governance.

The purpose of reform was to prop up the centrally planned economy—not to transition to market socialism. Speaking in late summer 1985 to the secretaries for economic affairs of the central committees of the East European communist parties, Gorbachev said: “Many of you see the solution to your problems in resorting to market mechanisms in place of direct planning. Some of you look at the market as a lifesaver for your economies. But, comrades, you should not think about lifesavers but about the ship, and the ship is socialism.” 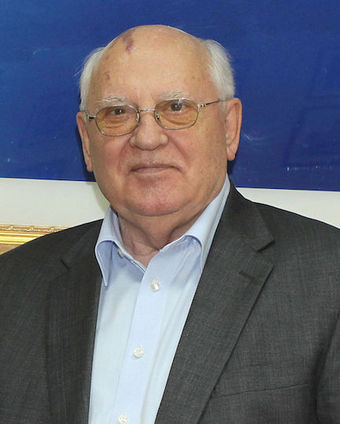 Gorbachev initiated his new policy of perestroika (literally “restructuring” in Russian) and its attendant radical reforms in 1986. They were sketched, but not fully spelled out, at the XXVIIth Party Congress in February–March 1986. The “reconstruction” was proposed in an attempt to overcome economic stagnation by creating a dependable and effective mechanism for accelerating economic and social progress. In July 1987, the Supreme Soviet of the Soviet Union passed the Law on State Enterprise. The law stipulated that state enterprises were free to determine output levels based on demand from consumers and other enterprises. Enterprises had to fulfill state orders, but could dispose of the remaining output as they saw fit. However, the state still held control over the means of production for these enterprises, limiting their ability to enact full-cost accountability. Enterprises bought input from suppliers at negotiated contract prices. Under the law, enterprises became self-financing; that is, they had to cover expenses (wages, taxes, supplies, and debt service) through revenues. No longer was the government to rescue unprofitable enterprises that faced bankruptcy. Finally, the law shifted control over the enterprise operations from ministries to elected workers’ collectives.

The Law on Cooperatives, enacted in May 1988, was perhaps the most radical of the economic reforms introduced in the early part of the Gorbachev era. For the first time since Vladimir Lenin’s New Economic Policy was abolished in 1928, the law permitted private ownership of businesses in the services, manufacturing, and foreign-trade sectors. The law initially imposed high taxes and employment restrictions, but it later revised these to avoid discouraging private-sector activity.

The most significant of Gorbachev’s reforms in the foreign economic sector allowed foreigners to invest in the Soviet Union in joint ventures with Soviet ministries, state enterprises, and cooperatives. The original version of the Soviet Joint Venture Law, which went into effect in June 1987, limited foreign shares of a Soviet venture to 49 percent and required that Soviet citizens occupy the positions of chairman and general manager. After potential Western partners complained, the government revised the regulations to allow majority foreign ownership and control. Under the terms of the Joint Venture Law, the Soviet partner supplied labor, infrastructure, and a potentially large domestic market. The foreign partner supplied capital, technology, entrepreneurial expertise, and high-quality products and services.

Gorbachev’s economic changes did little to restart the country’s sluggish economy in the late 1980s. The reforms decentralized economic activity to a certain extent, but price controls remained, as did the ruble’s inconvertibility and most government controls over the means of production. By 1990, the government had virtually lost control over economic conditions. Government spending increased sharply as more unprofitable enterprises required state support and consumer price subsidies continued. Tax revenues declined because local governments withheld tax revenues from the central government in a climate of growing regional autonomy. The elimination of central control over production decisions, especially in the consumer goods sector, led to the breakdown in traditional supply-demand relationships without contributing to the formation of new ones. Thus, instead of streamlining the system, Gorbachev’s decentralization caused new production bottlenecks.

In 1988, Gorbachev introduced glasnost, which gave the Soviet people freedoms they had not previously known, including greater freedom of speech. The press became far less controlled, and thousands of political prisoners and many dissidents were released as part of a wider program of de-Stalinization. Gorbachev’s goal in glasnost was to pressure conservatives within the CPSU who opposed his policies of economic restructuring, believing that through varying ranges of openness, debate, and participation, the Soviet people would support his reform initiatives. At the same time, he exposed his plans to more public criticism.

In June 1988, at the CPSU’s Party Conference, Gorbachev launched radical reforms to reduce party control of the government apparatus. He proposed a new executive in the form of a presidential system as well as a new legislative element, the Congress of People’s Deputies. Elections to the Congress of People’s Deputies were held throughout the Soviet Union in March and April 1989. This was the first free election in the Soviet Union since 1917. Gorbachev became Chairman of the Supreme Soviet (or head of state) on May 25, 1989.