Fall of the Soviet Union

The aging Soviet leadership of the 1980s was ill-equipped to deal with ongoing economic stagnation and worsening foreign conflicts such as the Soviet-Afghan War.

Describe the leadership problem facing the Soviet Union in the 1980s

Goulash Communism
The variety of communism as practiced in the Hungarian People’s Republic from the 1960s until the Central European collapse of communism in 1989. With elements of free market economics and an improved human rights record, it represented a quiet deviation from the Soviet principles applied to Hungary in the previous decade. The name is a semi-humorous metaphor derived from the popular Hungarian dish. Goulash is made with an assortment of unlike ingredients, representing how Hungarian communism was a mixed ideology and no longer strictly adhered to Marxist-Leninist interpretations as in the past.

By 1982, the stagnation of the Soviet economy was evidenced by the fact that the Soviet Union had been importing grain from the U.S. throughout the 1970s. However, the conditions that led to economic stagnation, primarily the huge rate of defense spending that consumed the budget, were so firmly entrenched within the economic system that any real turnaround seemed impossible. The transition period that separated the Brezhnev and Gorbachev eras resembled the former much more than the latter, although hints of reform emerged as early as 1983. 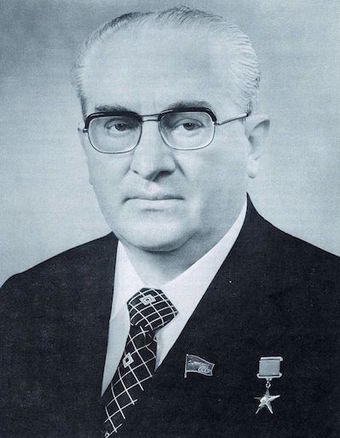 Yuri Andropov as depicted in the August 1983 issue of Soviet Life.

Brezhnev died on November 10, 1982. Two days passed between his death and the announcement of the election of Yuri Andropov as the new General Secretary, suggesting that a power struggle had occurred in the Kremlin. Andropov maneuvered his way into power both through his KGB connections and by gaining the support of the military by promising not to cut defense spending. For comparison, some of his rivals, such as Konstantin Chernenko, were skeptical of continued high military spending. At age 69, he was the oldest person ever appointed as General Secretary and 11 years older than Brezhnev when he acquired that post. In June 1983, he assumed the post of chairman of the Presidium of the Supreme Soviet, thus becoming the ceremonial head of state. It had taken Brezhnev 13 years to acquire this post.

Andropov began a thorough house-cleaning throughout the party and state bureaucracy, a decision made easy by the fact that the Central Committee had an average age of 69. He replaced more than one-fifth of the Soviet ministers and regional party first secretaries, and more than one-third of the department heads within the Central Committee apparatus. As a result, he replaced the aging leadership with younger, more vigorous administrators. But Andropov’s ability to reshape the top leadership was constrained by his own age and poor health and the influence of his rival (and longtime ally of Leonid Brezhnev) Konstantin Chernenko, who previously supervised personnel matters in the Central Committee.

Andropov’s domestic policy leaned heavily towards restoring discipline and order to Soviet society. He eschewed radical political and economic reforms, promoting instead a small degree of candor in politics and mild economic experiments similar to those associated with the late Premier Alexei Kosygin’s initiatives in the mid-1960s. In tandem with these economic experiments, Andropov launched an anti-corruption drive that reached high into the government and party ranks. Unlike Brezhnev, who possessed several mansions and a fleet of luxury cars, Andropov lived a modest life. While visiting Budapest in early 1983, he expressed interest in Hungary’s Goulash Communism and that the sheer size of the Soviet economy made strict top-down planning impractical. 1982 had witnessed the country’s worst economic performance since World War II, with real GDP growth at almost zero percent, necessitating real change, and fast.

Andropov’s health declined rapidly during the tense summer and fall of 1983, and he became the first Soviet leader to miss the anniversary celebrations of the 1917 revolution. He died in February 1984 of kidney failure after disappearing from public view for several months. His most significant legacy to the Soviet Union was his discovery and promotion of Mikhail Gorbachev.

At 71, Konstantin Chernenko was in poor health, suffering from emphysema, and unable to play an active role in policy-making when he was chosen after lengthy discussion to succeed Andropov. But Chernenko’s short time in office did bring about some significant policy changes, including more investment in consumer goods and services and in agriculture. He also called for a reduction in the Communist Party of the Soviet Union’s (CPSU) micromanagement of the economy. However, KGB repression of Soviet dissidents increased and personnel changes and investigations into corruption undertaken under Andropov came to an end. In February 1983, Soviet representatives withdrew from the World Psychiatric Organization in protest of its continued complaints about the use of psychiatry to suppress dissent. This policy was underlined in June when Vladimir Danchev, a broadcaster for Radio Moscow, referred to the Soviet troops in Afghanistan as “invaders” while conducting English-language broadcasts. After refusing to retract this statement, he was sent to a mental institution for several months.

Andropov played a dominant role in the decision to intervene militarily in Afghanistan on December 24, 1979, insisting on the invasion although he knew that the international community would find the USSR culpable. The decision to intervene led to the Soviet-Afghan War, which continued once Andropov became the leader of the USSR. By this time, Andropov felt the invasion might have been a mistake and halfheartedly explored options for a negotiated withdrawal. The Soviets had not foreseen taking such an active role in fighting the mujahideen rebels and attempted to downplay their involvement in relation to that of the Afghan army. However, the arrival of Soviet troops had the opposite effect on the Afghan people, incensing rather than pacifying and causing the mujahideen to gain in strength and numbers.

During the Chernenko interregnum, fighting in Afghanistan intensified. Once it became apparent that the Soviets could not take a backseat in the conflict, they followed three main strategies aimed at quelling the uprising. Intimidation was the first strategy, in which the Soviets would use airborne attacks as well as armored ground attacks to destroy villages, livestock, and crops in trouble areas. Locals were forced to either flee their homes or die as daily Soviet attacks made it impossible to live in these areas. By forcing the people of Afghanistan to flee their homes, the Soviets hoped to deprive the guerrillas of resources and safe havens. The second strategy consisted of subversion, which entailed sending spies to join resistance groups and report information as well as bribing local tribes or guerrilla leaders into ceasing operations. Finally, the Soviets used military forays into contested territories to root out the guerrillas and limit their options. Classic search and destroy operations were implemented and once villages were occupied by Soviet forces, inhabitants who remained were frequently interrogated and tortured for information, or killed. 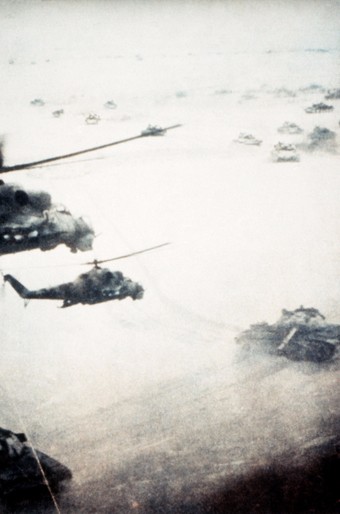 Tanks and Helicopters during the Soviet-Afghan War: Soviet ground forces in action while conducting an offensive operation against the Islamist resistance.

In the mid-1980s, the Afghan resistance movement, assisted by the U.S., Pakistan, Saudi Arabia, the UK, Egypt, China, and others, contributed to Moscow’s high military costs and strained international relations. The U.S. viewed the struggle in Afghanistan as an integral Cold War struggle and the CIA provided assistance to anti-Soviet forces via Pakistani intelligence services in a program called Operation Cyclone. The mujahideen favored sabotage operations. The more common types of sabotage included damaging power lines, knocking out pipelines and radio stations, and blowing up government office buildings, air terminals, hotels, cinemas, and so on. They concentrated on both civilian and military targets, knocking out bridges, closing major roads, attacking convoys, disrupting the electric power system and industrial production, and attacking police stations and Soviet military installations and air bases. They assassinated government officials and Marxist People’s Democratic Party of Afghanistan (PDPA) members, and laid siege to small rural outposts.