Formation of the Soviet Union

The government of the Soviet Union, formed in 1922 with the unification of the Russian, Transcaucasian, Ukrainian, and Byelorussian republics, was based on the one-party rule of the Communist Party (Bolsheviks), who increasingly developed a totalitarian regime, especially during the reign of Joseph Stalin.

Assess the reasons for creating the Soviet Union

Karl Marx
A German-born scientist, philosopher, economist, sociologist, journalist, and revolutionary socialist. His theories about society, economics, and politics—collectively understood as Marxism—hold that human societies develop through class struggle; in capitalism, this manifests itself in the conflict between the ruling classes (known as the bourgeoisie) that control the means of production and working classes (known as the proletariat) that enable these means by selling their labor for wages. Through his theories of alienation, value, commodity fetishism, and surplus value, he argued that capitalism facilitated social relations and ideology through commodification, inequality, and the exploitation of labor.
Great Purge
A campaign of political repression in the Soviet Union from 1936 to 1938. It involved a large-scale purge of the Communist Party and government officials, repression of peasants and the Red Army leadership, and widespread police surveillance, suspicion of “saboteurs,” imprisonment, and arbitrary executions.
First Five-Year Plan
A list of economic goals created by General Secretary Joseph Stalin and based on his policy of Socialism in One Country, implemented between 1928 and 1932. In 1929, Stalin edited the plan to include the creation of collective farming systems that stretched over thousands of acres of land and had hundreds of peasants working on them.
Joseph Stalin
The leader of the Soviet Union from the mid-1920s until his death in 1953. Holding the post of the General Secretary of the Central Committee of the Communist Party of the Soviet Union, he was effectively the dictator of the state.

The Soviet Union, officially the Union of Soviet Socialist Republics, was a socialist state in Eurasia that existed from 1922 to 1991. It was nominally a supranational union of national republics, but its government and economy were highly centralized in a state that was unitary in most respects. The Union’s capital was Moscow.

The Soviet Union had its roots in the October Revolution of 1917, when the Bolsheviks, led by Vladimir Lenin, overthrew the Russian Provisional Government that had replaced Tsar Nicholas II. This established the Russian Socialist Federative Soviet Republic (Russian SFSR) and started the Russian Civil War between the revolutionary “Reds” and the counter-revolutionary “Whites.” The Red Army entered several territories of the former Russian Empire and helped local communists take power through workers’ councils called “soviets,” which nominally acted on behalf of workers and peasants.

In 1922, the communists (Reds) were victorious, forming the Soviet Union with the unification of the Russian, Transcaucasian, Ukrainian, and Byelorussian republics. Under the control of the party, all politics and attitudes that were not strictly of the Russian Communist Party (RCP) were suppressed, under the premise that the RCP represented the proletariat and all activities contrary to the party’s beliefs were “counterrevolutionary” or “anti-socialist.” Eventually crushing all opponents, the RCP spread soviet-style rule quickly and established itself through all of Russia.

The original ideology of the state was primarily based on the works of Karl Marx and Friedrich Engels. In its essence, Marx’s theory stated that economic and political systems went through an inevitable evolution in form by which the current capitalist system would be replaced by a Socialist state before achieving international cooperation and peace in a “Workers’ Paradise,” creating a system directed by, what Marx called, “Pure Communism.”

Following Lenin’s death in 1924, a collective leadership (troika), and a brief power struggle, Joseph Stalin came to power in the mid-1920s. Stalin suppressed all political opposition to his rule, committed the state ideology to Marxism–Leninism (which he created), and initiated a centrally planned command economy. As a result, the country underwent a period of rapid industrialization and collectivization which laid the foundation for its victory in World War II and postwar dominance of Eastern Europe. Stalin also fomented political paranoia and conducted the Great Purge to remove opponents of his from the Communist Party through the mass arbitrary arrest of many people (military leaders, Communist Party members, and ordinary citizens alike) who were then sent to correctional labor camps (gulags) or sentenced to death.

Creation of the USSR and Early Years

On February 1, 1924, the USSR was recognized by the British Empire. The same year, a Soviet Constitution was approved, legitimizing the December 1922 union.

An intensive restructuring of the economy, industry and politics of the country began in the early days of Soviet power in 1917. A large part of this was done according to the Bolshevik Initial Decrees, government documents signed by Vladimir Lenin. One of the most prominent breakthroughs was the GOELRO plan, which envisioned a major restructuring of the Soviet economy based on total electrification of the country. The plan was developed in 1920 and covered a 10- to 15-year period. It included construction of a network of 30 regional power stations, including ten large hydroelectric power plants and numerous electric-powered large industrial enterprises. The plan became the prototype for subsequent Five-Year Plans and was fulfilled by 1931.

During the Civil War (1917–21), the Bolsheviks adopted war communism, which entailed the breakup of the landed estates and the forcible seizure of agricultural surpluses. In the cities there were intense food shortages and a breakdown in the money system (at the time many Bolsheviks argued that ending money’s role as a transmitter of “value” was a sign of the rapidly approaching communist epoch). Many city dwellers fled to the countryside, often to tend the land that the Bolshevik breakup of the landed estates had transferred to the peasants. Even small-scale “capitalist” production was suppressed.

Strong opposition soon developed. The peasants wanted cash payments for their products and resented having to surrender their surplus grain to the government as a part of its civil war policies. Confronted with peasant opposition, Lenin began a strategic retreat from war communism known as the New Economic Policy (NEP). The peasants were freed from wholesale levies of grain and allowed to sell their surplus produce in the open market. Commerce was stimulated by permitting private retail trading. The state continued to be responsible for banking, transportation, heavy industry, and public utilities.

Although the left opposition among the Communists criticized the rich peasants, or kulaks, who benefited from the NEP, the program proved highly beneficial and the economy revived. The NEP would later come under increasing opposition from within the party following Lenin’s death in early 1924.

The Death of Lenin and the Rise of Stalin

Following Lenin’s third stroke, a troika made up of Grigory Zinoviev of the Ukrainian SSR, Lev Kamenev of the Russian SFSR, and Joseph Stalin of the Transcaucasian SFSR emerged to take day-to-day leadership of the party and the country and block Trotsky from taking power. Lenin, however, became increasingly anxious about Stalin and following his December 1922 stroke, dictated a letter (known as Lenin’s Testament) to the party criticizing him and urging his removal as general secretary, a position which was becoming the most powerful in the party. Stalin was aware of Lenin’s Testament and acted to keep Lenin in isolation for health reasons and increase his control over the party apparatus. 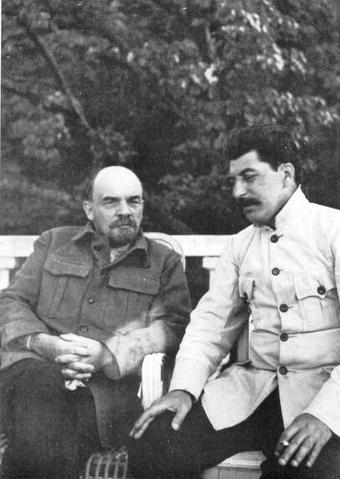 Lenin and Stalin (1922):  Toward the end of his life, Lenin became increasingly anxious about Stalin and began criticizing him and urging his removal as general secretary. Despite these misgivings, Stalin eventually replaced Lenin as the leader of the USSR.

On April 3, 1922, Stalin was named the General Secretary of the Communist Party of the Soviet Union. Lenin had appointed Stalin the head of the Workers’ and Peasants’ Inspectorate, which gave Stalin considerable power. By gradually consolidating his influence and isolating and outmaneuvering his rivals within the party, Stalin became the undisputed leader of the Soviet Union and, by the end of the 1920s, established totalitarian rule.

Lenin died in January 1924 and in May his Testament was read aloud at the Central Committee, but Zinoviev and Kamenev argued that Lenin’s objections had proven groundless and that Stalin should remain General Secretary. The Central Committee decided not to publish the testament.

In October 1927, Grigory Zinoviev and Leon Trotsky were expelled from the Central Committee and forced into exile.

In 1928, Stalin introduced the First Five-Year Plan for building a socialist economy. In place of the internationalism expressed by Lenin throughout the Revolution, it aimed to build Socialism in One Country. In industry, the state assumed control over all existing enterprises and undertook an intensive program of industrialization. In agriculture, rather than adhering to the “lead by example” policy advocated by Lenin, forced collectivization of farms was implemented all over the country.

Famines ensued, causing millions of deaths; surviving kulaks were persecuted and many sent to Gulags to do forced labor. Social upheaval continued in the mid-1930s. Stalin’s Great Purge resulted in the execution or detainment of many “Old Bolsheviks” who had participated in the October Revolution with Lenin. According to declassified Soviet archives, in 1937 and 1938 the NKVD arrested more than 1.5 million people, of whom 681,692 were shot. Over two years, that averages to over one thousand executions a day. According to historian Geoffrey Hosking, “…excess deaths during the 1930s as a whole were in the range of 10–11 million.” Yet despite the turmoil of the mid-to-late 1930s, the Soviet Union developed a powerful industrial economy in the years before World War II.