The Russian Civil War, which broke out in 1918 shortly after the October Revolution, was fought mainly between the “Reds,” led by the Bolsheviks, and the “Whites,” a politically-diverse coalition of anti-Bolsheviks.

Describe the various parties that participated in the Russian Civil War

Cheka
The first of a succession of Soviet state security organizations. It was created on December 20, 1917, after a decree issued by Vladimir Lenin, and was subsequently led by Felix Dzerzhinsky, a Polish aristocrat turned communist. These troops policed labor camps; ran the Gulag system; conducted requisitions of food; subjected political opponents to secret arrest, detention, torture, and summary execution; and put down rebellions and riots by workers or peasants, and mutinies in the desertion-plagued Red Army.
White Army
A loose confederation of Anti-Communist forces that fought the Bolsheviks, also known as the Reds, in the Russian Civil War (1917–1923) and, to a lesser extent, continued operating as militarized associations both outside and within Russian borders until roughly World War II.
Red Army
The army and the air force of the Russian Soviet Federative Socialist Republic, and after 1922 the Union of Soviet Socialist Republics. The army was established immediately after the 1917 October Revolution.

The Russian Civil War (November 1917 – October 1922) was a multi-party war in the former Russian Empire immediately after the Russian Revolutions of 1917, as many factions vied to determine Russia’s political future. The two largest combatant groups were the Red Army, fighting for the Bolshevik form of socialism, and the loosely allied forces known as the White Army, which included diverse interests respectively favoring monarchism, capitalism, and alternative forms of socialism, each with democratic and antidemocratic variants. In addition, rival militant socialists and non-ideological Green armies fought against both the Bolsheviks and the Whites. The Whites had backing from Great Britain, France, the U.S., and Japan, while the Reds possessed internal support which proved much more effective.

The Red Army defeated the White Armed Forces of South Russia in Ukraine and the army led by Admiral Aleksandr Kolchak in Siberia in 1919. The remains of the White forces commanded by Pyotr Nikolayevich Wrangel were beaten in Crimea and evacuated in late 1920. Lesser battles of the war continued on the periphery for two more years, and minor skirmishes with the remnants of the White forces in the Far East continued well into 1923. Armed national resistance in Central Asia was not completely crushed until 1934. There were an estimated 7-12 million casualties during the war, mostly civilians. The Russian Civil War has been described by some as the greatest national catastrophe that Europe had yet seen.

British historian Orlando Figes has contended that the root of the Whites’ defeat was their inability to dispel the popular image that they were associated with Tsarist Russia and supportive of a Tsarist restoration. 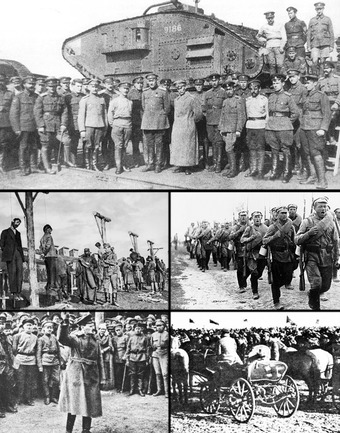 Russian Civil War: Clockwise from top: Soldiers of the Don Army in 1919; a White Russian infantry division in March 1920; soldiers of the 1st Cavalry Army; Leon Trotsky in 1918; hanging of workers in Yekaterinoslav by Austro-Hungarian troups, April 1918.

In the wake of the October Revolution, the old Russian Imperial Army had been demobilized; the volunteer-based Red Guard was the Bolsheviks’ main military force, augmented by an armed military component of the Cheka, the Bolshevik state security apparatus. In January, after significant reverses in combat, War Commissar Leon Trotsky headed the reorganization of the Red Guard into a Workers’ and Peasants’ Red Army to create a more professional fighting force. Political commissars were appointed to each unit of the army to maintain morale and ensure loyalty.

In June 1918, when it became apparent that a revolutionary army composed solely of workers would be far too small, Trotsky instituted mandatory conscription of the rural peasantry into the Red Army. Opposition of rural Russians to Red Army conscription units was overcome by taking hostages and shooting them when necessary in order to force compliance, the same practices used by the White Army officers. Former Tsarist officers were utilized as “military specialists,” and sometimes their families were taken hostage in order to ensure their loyalty.

While resistance to the Red Guard began on the day after the Bolshevik uprising, the Treaty of Brest-Litovsk and the political ban became a catalyst for the formation of anti-Bolshevik groups both inside and outside Russia, pushing them into action against the new regime.

A loose confederation of anti-Bolshevik forces aligned against the Communist government, including landowners, republicans, conservatives, middle-class citizens, reactionaries, pro-monarchists, liberals, army generals, non-Bolshevik socialists who still had grievances, and democratic reformists voluntarily united only in their opposition to Bolshevik rule. Their military forces, bolstered by forced conscriptions and terror and by foreign influence and led by Gen. Yudenich, Adm. Kolchak, and Gen. Denikin, became known as the White movement (sometimes referred to as the “White Army”) and controlled significant parts of the former Russian Empire for most of the war.

The Western Allies armed and supported opponents of the Bolsheviks. They were worried about (1) a possible Russo-German alliance, (2) the prospect of the Bolsheviks making good on their threats to default on Imperial Russia’s massive foreign loans and (3) that the Communist revolutionary ideas would spread (a concern shared by many Central Powers). Hence, many of these countries expressed their support for the Whites, including the provision of troops and supplies. Winston Churchill declared that Bolshevism must be “strangled in its cradle.” The British and French had supported Russia during World War I on a massive scale with war materials. After the treaty, it looked like much of that material would fall into the hands of the Germans. Under this pretext, the Allies intervened in the Russian Civil War, with the United Kingdom and France sending troops into Russian ports. There were violent clashes with troops loyal to the Bolsheviks.

The results of the civil war were momentous. Soviet demographer Boris Urlanis estimated the total number of men killed in action in the Civil War and Polish-Soviet War at 300,000 (125,000 in the Red Army, 175,500 White armies and Poles) and the total number of military personnel dead from disease (on both sides) as 450,000. During the Red Terror the Cheka carried out at least 250,000 summary executions of “enemies of the people” with estimates reaching above a million.

At the end of the Civil War the Russian Soviet Federative Socialist Republic was exhausted and near ruin. The droughts of 1920 and 1921, as well as the 1921 famine, worsened the disaster still further. Disease had reached pandemic proportions, with 3 million dying of typhus alone in 1920. Millions more also died of widespread starvation, wholesale massacres by both sides, and pogroms against Jews in Ukraine and southern Russia. By 1922 there were at least 7 million street children in Russia as a result of nearly ten years of devastation from the Great War and the civil war.

Another one to two million people, known as the White émigrés, fled Russia, many with Gen. Wrangel—some through the Far East, others west into the newly independent Baltic countries. These émigrés included a large percentage of the educated and skilled population of Russia.

The Russian economy was devastated by the war, with factories and bridges destroyed, cattle and raw materials pillaged, mines flooded, and machines damaged. The industrial production value descended to one-seventh of the value of 1913 and agriculture to one-third.

War Communism saved the Soviet government during the Civil War, but much of the Russian economy had ground to a standstill. The peasants responded to requisitions by refusing to till the land. By 1921 cultivated land had shrunk to 62% of the pre-war area, and the harvest yield was only about 37% of normal.