On October 25, 1917, Bolshevik leader Vladimir Lenin led his leftist revolutionaries in a successful revolt against the ineffective provisional government, an event known as the October Revolution.

Explain the events of the October Revolution

Decree on Land
Written by Vladimir Lenin, this law was passed by the Second Congress of Soviets of Workers’, Soldiers’, and Peasants’ Deputies on October 26, 1917, following the success of the October Revolution. It decreed an abolition of private property and the redistribution of the landed estates among the peasantry.
Marxism–Leninism
A political philosophy or worldview founded on ideas of Classical Marxism and Leninism that seeks to establish socialist states and develop them further. They espouse a wide array of views depending on their understanding of Marxism and Leninism, but generally support the idea of a vanguard party, one-party state, proletarian state-dominance over the economy, internationalism, opposition to bourgeois democracy, and opposition to capitalism. It remains the official ideology of the ruling parties of China, Cuba, Laos, Vietnam, a number of Indian states, and certain governed Russian oblasts such as Irkutsk. It was the official ideology of the Communist Party of the Soviet Union (CPSU) and the other ruling parties that made up the Eastern Bloc.
Vladimir Lenin
A Russian communist revolutionary, politician, and political theorist. He served as head of government of the Russian Republic from 1917 to 1918, of the Russian Soviet Federative Socialist Republic from 1918 to 1924, and of the Soviet Union from 1922 to 1924. Under his administration, Russia and then the wider Soviet Union became a one-party socialist state governed by the Russian Communist Party. Ideologically a Marxist, he developed political theories known as Leninism.
October Revolution
A seizure of state power by the Bolshevik Party instrumental in the larger Russian Revolution of 1917. It took place with an armed insurrection in Petrograd on October 25, 1917. It followed and capitalized on the February Revolution of the same year.

The October Revolution, commonly referred to as Red October, the October Uprising, or the Bolshevik Revolution, was a seizure of state power instrumental in the larger Russian Revolution of 1917. It took place with an armed insurrection in Petrograd on October 25, 1917.

It followed and capitalized on the February Revolution of the same year, which overthrew the Tsarist autocracy and resulted in a provisional government after a transfer of power proclaimed by Grand Duke Michael, brother of Tsar Nicolas II, who declined to take power after the Tsar stepped down. During this time, urban workers began to organize into councils (Russian: Soviet) wherein revolutionaries criticized the provisional government and its actions. The October Revolution in Petrograd overthrew the provisional government and gave the power to the local soviets. The Bolshevik party was heavily supported by the soviets. After the Congress of Soviets, now the governing body, had its second session, it elected members of the Bolsheviks and other leftist groups such as the Left Socialist Revolutionaries to key positions within the new state of affairs. This immediately initiated the establishment of the Russian Socialist Federative Soviet Republic, the world’s first self-proclaimed socialist state.

The revolution was led by the Bolsheviks, who used their influence in the Petrograd Soviet to organize the armed forces. Bolshevik Red Guards forces under the Military Revolutionary Committee began the takeover of government buildings on October 24, 1917. The following day, the Winter Palace (the seat of the Provisional government located in Petrograd, then capital of Russia), was captured.

The long-awaited Constituent Assembly elections were held on November 12, 1917. The Bolsheviks only won 175 seats in the 715-seat legislative body, coming in second behind the Socialist Revolutionary party, which won 370 seats. The Constituent Assembly was to first meet on November 28, 1917, but its convocation was delayed until January 5, 1918, by the Bolsheviks. On its first and only day in session, the body rejected Soviet decrees on peace and land, and was dissolved the next day by order of the Congress of Soviets.

As the revolution was not universally recognized, there followed the struggles of the Russian Civil War (1917–22) and the creation of the Soviet Union in 1922.

The October Revolution was led by Vladimir Lenin and was based upon Lenin’s writing on the ideas of Karl Marx, a political ideology often known as Marxism-Leninism. Marxist-Leninists espouse a wide array of views depending on their understanding of Marxism and Leninism, but generally support the idea of a vanguard party, one-party state, proletarian state-dominance over the economy, internationalism, opposition to bourgeois democracy, and opposition to capitalism. The October Revolution marked the beginning of the spread of communism in the 20th century. It was far less sporadic than the revolution of February and came about as the result of deliberate planning and coordinated activity to that end.

Though Lenin was the leader of the Bolshevik Party, it has been argued that since Lenin was not present during the actual takeover of the Winter Palace, it was really Trotsky’s organization and direction that led the revolution, merely spurred by the motivation Lenin instigated within his party. Critics on the right have long argued that the financial and logistical assistance of German intelligence via agent Alexander Parvus was a key component as well, though historians are divided since there is little evidence supporting that claim.

The Second Congress of Soviets consisted of 670 elected delegates; 300 were Bolshevik and nearly a hundred were Left Socialist-Revolutionaries, who also supported the overthrow of the Alexander Kerensky Government. When the fall of the Winter Palace was announced, the Congress adopted a decree transferring power to the Soviets of Workers’, Soldiers’ and Peasants’ Deputies, thus ratifying the Revolution.

The transfer of power was not without disagreement. The center and right wings of the Socialist Revolutionaries as well as the Mensheviks believed that Lenin and the Bolsheviks had illegally seized power and walked out before the resolution was passed. As they exited, they were taunted by Leon Trotsky who told them “You are pitiful isolated individuals; you are bankrupts; your role is played out. Go where you belong from now on — into the dustbin of history!”

The following day, October 26, the Congress elected a Council of People’s Commissars (Sovnarkom) with Lenin as leader as the basis of a new Soviet Government, pending the convocation of a Constituent Assembly, and passed the Decree on Peace and the Decree on Land. This new government was also officially called “provisional” until the Assembly was dissolved. The Council of People’s Commissars now began to arrest the leaders of opposition parties. Dozens of Constitutional Democratic Party (Kadet) leaders and members of the Constituent Assembly were imprisoned in The Peter and Paul Fortress. These would be followed by the arrests of Socialist Revolutionary Party and Menshevik leaders. Posters were pinned on walls and fences by the Socialist-Revolutionaries, describing the takeover as a “crime against the motherland and revolution.” There was also strong anti-Bolshevik opposition within Petrograd. All in all, the transfer of power was complex and replete with conflict within the revolutionaries.

The Decree on Land ratified the actions of the peasants who throughout Russia seized private land and redistributed it among themselves. The Bolsheviks viewed themselves as representing an alliance of workers and peasants and memorialized that understanding with the hammer and sickle on the flag and coat of arms of the Soviet Union. Other decrees:

The success of the October Revolution transformed the Russian state into a soviet republic. A coalition of anti-Bolshevik groups attempted to unseat the new government in the Russian Civil War from 1918 to 1922. 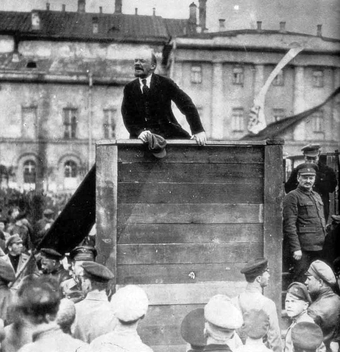 Lenin and Trotsky, Russian Revolutionaries: Vladimir Lenin, leader of the Bolsheviks, speaking at a meeting in Sverdlov Square in Moscow, with Leon Trotsky and Lev Kamenev adjacent to the right of the podium.