The Russian Empire collapsed with the abdication of Emperor Nicholas II during the February Revolution. The old regime was replaced by a politically moderate provisional government that struggled for power with the socialist-led worker councils (soviets).

July Days
Events in 1917 that took place in Petrograd, Russia, between July 3 and 7 when soldiers and industrial workers engaged in spontaneous armed demonstrations against the Russian Provisional Government. The Bolsheviks initially attempted to prevent the demonstrations and then decided to support them.
Soviet
Political organizations and governmental bodies, essentially workers’ councils, primarily associated with the Russian Revolutions and the history of the Soviet Union, that gave the name to the latter state.
February Revolution
The first of two Russian revolutions in 1917. It involved mass demonstrations and armed clashes with police and gendarmes, the last loyal forces of the Russian monarchy. On March 12, mutinous Russian Army forces sided with the revolutionaries. Three days later, the result was the abdication of Tsar Nicholas II, the end of the Romanov dynasty, and the end of the Russian Empire.
Russian Provisional Government
A provisional government of the Russian Republic established immediately following the abdication of Tsar Nicholas II of the Russian Empire on 2 March.

The next day, a series of meetings and rallies were held for International Women’s Day, which gradually turned into economic and political gatherings. Demonstrations were organized to demand bread, supported by the industrial working force who considered them a reason to continue the strikes. The women workers marched to nearby factories, bringing out over 50,000 workers on strike. By March 10, virtually every industrial enterprise in Petrograd had been shut down along with many commercial and service enterprises. Students, white-collar workers, and teachers joined the workers in the streets and at public meetings.

To quell the riots, the Tsar looked to the army. At least 180,000 troops were available in the capital, but most were either untrained or injured. Historian Ian Beckett suggests around 12,000 could be regarded as reliable, but even these proved reluctant to move in on the crowd since it included so many women. For this reason, on March 11 when the Tsar ordered the army to suppress the rioting by force, troops began to mutiny. Although few actively joined the rioting, many officers were either shot or went into hiding; the ability of the garrison to hold back the protests was all but nullified, symbols of the Tsarist regime were rapidly torn down, and governmental authority in the capital collapsed – not helped by the fact that Nicholas had suspended the Duma (legislature) that morning, leaving it with no legal authority to act. The response of the Duma, urged on by the liberal bloc, was to establish a temporary committee to restore law and order; meanwhile, the socialist parties established the Petrograd Soviet to represent workers and soldiers. The remaining loyal units switched allegiance the next day.

The Tsar directed the royal train,  stopped on March 14 by a group of revolutionaries at Malaya Vishera, back to Petrograd. When the Tsar finally arrived at in Pskov, the Army Chief Ruzsky and the Duma deputees Guchkov and Shulgin suggested in unison that he abdicate the throne. He did so on March on behalf of both himself and his son, the Tsarevich. Nicholas nominated his brother, the Grand Duke Michael Alexandrovich, to succeed him, but the Grand Duke realized that he would have little support as ruler. He declined the crown on March 16, stating that he would take it only as the consensus of democratic action.

The immediate effect of the February Revolution was a widespread atmosphere of elation and excitement in Petrograd. On March 16, the provisional government was announced. The center-left was well represented, and the government was initially chaired by a liberal aristocrat, Prince Georgy Yevgenievich Lvov, a member of the Constitutional Democratic party (KD). The socialists had formed their rival body, the Petrograd Soviet (or workers’ council) four days earlier. The Petrograd Soviet and the provisional government competed for power over Russia.

Reign of the Provisional Government

The Russian Provisional Government was a provisional government of the Russian Republic established immediately following the abdication of Tsar Nicholas II of the Russian Empire on March 2, 1917. It was intended to organize elections to the Russian Constituent Assembly and its convention.

Despite its short reign of power and implementation shortcomings, the provisional government passed very progressive legislation. The policies enacted by this moderate government (by 1917 Russian standards) represented arguably the most liberal legislation in Europe at the time. It abolished capital punishment, declared the independence of Poland, redistributed wealth in the countryside, restored the constitution of Finland, established local government on a universal suffrage basis, separated church and state, conceded language rights to all the nationalities, and confirmed liberty of speech, liberty of the Press, and liberty of assembly.

A period of dual power ensued during which the provisional government held state power while the national network of soviets, led by socialists, had the allegiance of the lower classes and the political left. During this chaotic period there were frequent mutinies, protests, and strikes. When the provisional government chose to continue fighting the war with Germany, the Bolsheviks and other socialist factions campaigned for stopping the conflict. The Bolsheviks turned workers’ militias under their control into the Red Guards (later the Red Army), over which they exerted substantial control.

In July, following a series of crises known as the July Days (strikes by soldiers and industrial workers) that undermined its authority with the public, the head of the provisional government resigned and was succeeded by Alexander Kerensky. Kerensky was more progressive than his predecessor but not radical enough for the Bolsheviks or many Russians discontented with the deepening economic crisis and the continuation of the war. While Kerensky’s government marked time, the socialist-led soviet in Petrograd joined with soviets (workers’ councils) that formed throughout the country to create a national movement.

The period of competition for authority ended in late October 1917 when Bolsheviks routed the ministers of the provisional government in the events known as the October Revolution and placed power in the hands of the soviets, which had given their support to the Bolsheviks. 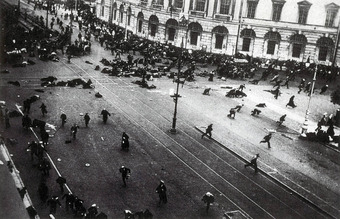 July Days: Street demonstration on Nevsky Prospekt in Petrograd just after of the Provisional Government opened fire in the July Days.