Under Tsar Nicholas II (reigned 1894–1917), the Russian Empire slowly industrialized amidst increased discontent and dissent among the lower classes. This only increased during World War I, leading to the utter collapse of the Tsarist régime in 1917 and an era of civil war.

Tsar Nicholas II
The last Emperor of Russia, ruling from November 1894 until his forced abdication on March 15, 1917. His reign saw the fall of the Russian Empire from one of the foremost great powers of the world to economic and military collapse. Due to the Khodynka Tragedy, anti-Semitic pogroms, Bloody Sunday, the violent suppression of the 1905 Revolution, the execution of political opponents, and his perceived responsibility for the Russo-Japanese War, he was given the nickname Nicholas the Bloody by his political adversaries.
St. Petersburg Soviet
A workers’ council or soviet circa 1905. The idea of a soviet as an organ to coordinate workers’ strike activities arose during the January–February 1905 meetings of workers at the apartment of Voline (later a famous anarchist) during the abortive revolution of 1905. However, its activities were quickly repressed by the government. The model would later become central to the communists during the Revolution of 1917.
Bolshevik party
Literally meaning “one of the majority,” this party was a faction of the Marxist Russian Social Democratic Labour Party (RSDLP) which split from the Menshevik faction at the Second Party Congress in 1903. They ultimately became the Communist Party of the Soviet Union.

Under Tsar Nicholas II (reigned 1894–1917), the Russian Empire slowly industrialized while repressing political opposition in the center and on the far left. It recklessly entered wars with Japan (1904) and with Germany and Austria (1914) for which it was very poorly prepared, leading to the utter collapse of the old régime in 1917 and an era of civil war.

During the 1890s, Russia’s industrial development led to a large increase in the size of the urban middle-class and orking class, which gave rise to a more dynamic political atmosphere and the development of radical parties. Because the state and foreigners owned much of Russia’s industry, the Russian working class was comparatively stronger and the Russian bourgeoisie comparatively weaker than in the West. The working class and peasants became the first to establish political parties in Russia because the nobility and the wealthy bourgeoisie were politically timid. During the 1890s and early 1900s, bad living and working  conditions, high taxes, and land hunger gave rise to more frequent strikes and agrarian disorders. These activities prompted the bourgeoisie of various nationalities in the Russian Empire to develop a host of parties, both liberal and conservative.

The Russian Revolution of 1905 was a major factor in the February Revolutions of 1917. The events of Bloody Sunday triggered a line of protests. A council of workers called the St. Petersburg Soviet was created in all this chaos, beginning the era of communist political protest.

Russia’s systems for agricultural production influenced peasants and other social groups to reform against the government and promote social changes. Historians George Jackson and Robert Devlin write, “At the beginning of the twentieth century, agriculture constituted the single largest sector of the Russian economy, producing approximately one-half of the national income and employing two-thirds of Russia’s population.” This illustrates the tremendous role peasants played economically, making them detrimental to the revolutionary ideology of the populist and social democrats. At the end of the 19th century, Russian agriculture as a whole was the worst in Europe. The Russian system of agriculture lacked capital investment and technological advancement. Livestock productivity was notoriously backwards and the lack of grazing land such as meadows forced livestock to graze in fallow uncultivated land. Both the crop and livestock system failed to withstand the Russian winters. During the Tsarist rule, the agricultural economy diverged from subsistence production to production directly for the market. Along with the agricultural failures, Russia had rapid population growth, railroads expanded across farmland, and inflation attacked the price of commodities. Restrictions were placed on the distribution of food and ultimately led to famines. Agricultural difficulties in Russia limited the economy, influencing social reforms and assisting the rise of the Bolshevik party.

The social causes of the Russian Revolution mainly came from centuries of oppression of the lower classes by the Tsarist regime and Nicholas’s failures in World War I. While rural agrarian peasants had been emancipated from serfdom in 1861, they still resented paying redemption payments to the state, and demanded communal tender of the land they worked. The problem was further compounded by the failure of Sergei Witte’s land reforms of the early 20th century. Increasing peasant disturbances and sometimes actual revolts occurred, with the goal of securing ownership of the land they worked. Russia consisted mainly of poor farming peasants, with 1.5% of the population owning 25% of the land.

Workers had good reasons for discontent: overcrowded housing with often deplorable sanitary conditions; long hours at work (on the eve of the war, a 10-hour workday six days a week was the average and many were working 11–12 hours a day by 1916); constant risk of injury and death from poor safety and sanitary conditions; harsh discipline (not only rules and fines, but foremen’s fists); and inadequate wages (made worse after 1914 by steep wartime increases in the cost of living). At the same time, urban industrial life was full of benefits, though these could be just as dangerous, from the point of view of social and political stability, as the hardships. There were many encouragements to expect more from life. Acquiring new skills gave many workers a sense of self-respect and confidence, heightening expectations and desires. Living in cities, workers encountered material goods they had never seen in villages. Most importantly, they were exposed to new ideas about the social and political order.

The rapid industrialization of Russia also resulted in urban overcrowding. Between 1890 and 1910, the population of the capital, Saint Petersburg, swelled from 1,033,600 to 1,905,600, with Moscow experiencing similar growth. This created a new proletariat that due to being crowded together in the cities was much more likely to protest and go on strike than the peasantry had been in previous eras. In one 1904 survey, it was found that an average of sixteen people shared each apartment in Saint Petersburg with six people per room. There was no running water, and piles of human waste were a threat to the health of the workers. The poor conditions only aggravated the situation, with the number of strikes and incidents of public disorder rapidly increasing in the years shortly before World War I. Because of late industrialization, Russia’s workers were highly concentrated.

Tsar Nicholas II and his subjects entered World War I with enthusiasm and patriotism, with the defense of Russia’s fellow Orthodox Slavs, the Serbs, as the main battle cry. In August 1914, the Russian army invaded Germany’s province of East Prussia and occupied a significant portion of Austrian-controlled Galicia in support of the Serbs and their allies – the French and British. Military reversals and shortages among the civilian population, however, soon soured much of the population. German control of the Baltic Sea and German-Ottoman control of the Black Sea severed Russia from most of its foreign supplies and potential markets.

By the middle of 1915, the impact of the war was demoralizing. Food and fuel were in short supply, casualties were increasing, and inflation was mounting. Strikes rose among low-paid factory workers, and there were reports that peasants, who wanted reforms of land ownership, were restless. The tsar eventually decided to take personal command of the army and moved to the front, leaving Alexandra in charge in the capital.

By its end, World War I prompted a Russian outcry directed at Tsar Nicholas II. It was another major factor contributing to the retaliation of the Russian Communists against their royal opponents. After the entry of the Ottoman Empire on the side of the Central Powers in October 1914, Russia was deprived of a major trade route through Ottoman Empire, which followed with a minor economic crisis in which Russia became incapable of providing munitions to its army in the years leading to 1917. However, the problems were merely administrative and not industrial, as Germany was producing great amounts of munitions whilst constantly fighting on two major battlefronts.

The war also developed a weariness in the city, owing to a lack of food in response to the disruption of agriculture. Food scarcity had become a considerable problem in Russia, but the cause did not lie in any failure of the harvests, which had not been significantly altered during wartime. The indirect reason was that the government, in order to finance the war, had been printing millions of ruble notes, and by 1917 inflation increased prices up to four times what they had been in 1914. The peasantry were consequently faced with the higher cost of purchases, but made no corresponding gain in the sale of their own produce, since this was largely taken by the middlemen on whom they depended. As a result, they tended to hoard their grain and to revert to subsistence farming, so the cities were constantly short of food. At the same time rising prices led to demands for higher wages in the factories, and in January and February 1916 revolutionary propaganda aided by German funds led to widespread strikes. Heavy losses during the war also strengthened thoughts that Tsar Nicholas II was unfit to rule. 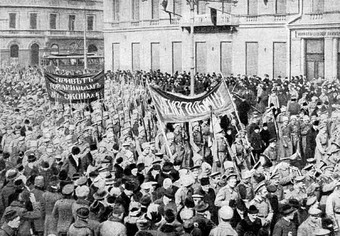 Discontent Leading up the Russian Revolution: Russian soldiers marching in Petrograd in February 1917.