The Russian Revolution of 1905 was a wave of mass political and social unrest that spread through vast areas of the Russian Empire, which included worker strikes, peasant unrest, and military mutinies.

Outline the events of the 1905 Revolution, along with its successes and failures

Russification
A form of cultural assimilation during which non-Russian communities, voluntarily or not, give up their culture and language in favor of the Russian one. In a historical sense, the term refers to both official and unofficial policies of Imperial Russia and the Soviet Union with respect to their national constituents and to national minorities in Russia, aimed at Russian domination.
State Duma
The Lower House of the legislative assembly in the late Russian Empire, which held its meetings in the Taurida Palace in St. Petersburg. It convened four times between April 1906 and the collapse of the Empire in February 1917. It was founded during the Russian Revolution of 1905 as the Tsar’s response to rebellion.
Russian Constitution of 1906
A major revision of the 1832 Fundamental Laws of the Russian Empire, which transformed the formerly absolutist state into one in which the emperor agreed for the first time to share his autocratic power with a parliament. It was enacted on May 6, 1906, on the eve of the opening of the first State Duma.

The Russian Revolution of 1905 was a wave of mass political and social unrest that spread through vast areas of the Russian Empire, some of which was directed at the government. It included worker strikes, peasant unrest, and military mutinies and led to constitutional reform, including the establishment of the State Duma, the multi-party system, and the Russian Constitution of 1906.

According to Sidney Harcave, author of The Russian Revolution of 1905, four problems in Russian society contributed to the revolution. First, newly emancipated peasants earned too little and were not allowed to sell or mortgage their allotted land. Second, ethnic minorities resented the government because of its “Russification,” discrimination, and repression, both social and formal, such as banning them from voting and serving in the Guard or Navy and limiting attendance in schools. Third, a nascent industrial working class resented the government for doing too little to protect them, by banning strikes and labor unions. Finally, the educated class fomented and spread radical ideas after a relaxing of discipline in universities allowed a new consciousness to grow among students.

Taken individually, these issues might not have affected the course of Russian history, but together they created the conditions for a potential revolution. Historian James Defronzo writes, “At the turn of the century, discontent with the Tsar’s dictatorship was manifested not only through the growth of political parties dedicated to the overthrow of the monarchy but also through industrial strikes for better wages and working conditions, protests and riots among peasants, university demonstrations, and the assassination of government officials, often done by Socialist Revolutionaries.”

Start of the Revolution

In December 1904, a strike occurred at the Putilov plant (a railway and artillery supplier) in St. Petersburg. Sympathy strikes in other parts of the city raised the number of strikers to 150,000 workers in 382 factories. By January 21, 1905, the city had no electricity and newspaper distribution was halted. All public areas were declared closed.

Controversial Orthodox priest Georgy Gapon, who headed a police-sponsored workers’ association, led a huge workers’ procession to the Winter Palace to deliver a petition to the Tsar on Sunday, January 22, 1905. The troops guarding the palace were ordered to tell the demonstrators not to pass a certain point, according to Sergei Witte, and at some point, troops opened fire on the demonstrators, causing between 200 and 1,000 deaths. The event became known as Bloody Sunday and is considered by many scholars as the start of the active phase of the revolution.

The events in St. Petersburg provoked public indignation and a series of massive strikes that spread quickly throughout the industrial centers of the Russian Empire. Polish socialists called for a general strike. By the end of January 1905, over 400,000 workers in Russian Poland were on strike. Half of European Russia’s industrial workers went on strike in 1905, and 93.2% in Poland. There were also strikes in Finland and the Baltic coast.

Nationalist groups were angered by the Russification undertaken since Alexander II. The Poles, Finns, and Baltic provinces all sought autonomy and freedom to use their national languages and promote their own cultures. Muslim groups were also active — the First Congress of the Muslim Union took place in August 1905. Certain groups took the opportunity to settle differences with each other rather than the government. Some nationalists undertook anti-Jewish pogroms, possibly with government aid, and in total over 3,000 Jews were killed.

Height of the Revolution

Tsar Nicholas II agreed on February 18 to the creation of a State Duma of the Russian Empire with consultative powers only. When its slight powers and limits on the electorate were revealed, unrest redoubled. The Saint Petersburg Soviet was formed and called for a general strike in October, refusal to pay taxes, and the withdrawal of bank deposits.

In June and July 1905, there were many peasant uprisings in which peasants seized land and tools. Disturbances in the Russian-controlled Congress Poland culminated in June 1905 in the Łódź insurrection. Surprisingly, only one landlord was recorded as killed. Far more violence was inflicted on peasants outside the commune with 50 deaths recorded.

The October Manifesto, written by Sergei Witte and Alexis Obolenskii, was presented to the Tsar on October 14. It closely followed the demands of the Zemstvo Congress in September, granting basic civil rights, allowing the formation of political parties, extending the franchise towards universal suffrage, and establishing the Duma as the central legislative body. The Tsar waited and argued for three days, but finally signed the manifesto on October 30, 1905, citing his desire to avoid a massacre and his realization that insufficient military force was available to pursue alternate options. He regretted signing the document, saying that he felt “sick with shame at this betrayal of the dynasty … the betrayal was complete.”

When the manifesto was proclaimed, there were spontaneous demonstrations of support in all the major cities. The strikes in St. Petersburg and elsewhere officially ended or quickly collapsed. A political amnesty was also offered. The concessions came hand-in-hand with renewed, brutal action against the unrest. There was also a backlash from the conservative elements of society, with right-wing attacks on strikers, left-wingers, and Jews.

While the Russian liberals were satisfied by the October Manifesto and prepared for upcoming Duma elections, radical socialists and revolutionaries denounced the elections and called for an armed uprising to destroy the Empire.

Some of the November uprising of 1905 in Sevastopol, headed by retired naval Lieutenant Pyotr Schmidt, was directed against the government, while some was undirected. It included terrorism, worker strikes, peasant unrest, and military mutinies, and was only suppressed after a fierce battle. The Trans-Baikal railroad fell into the hands of striker committees and demobilized soldiers returning from Manchuria after the Russo–Japanese War. The Tsar had to send a special detachment of loyal troops along the Trans-Siberian Railway to restore order.

Between December 5 and 7, there was another general strike by Russian workers. The government sent troops on December 7, and a bitter street-by-street fight began. A week later, the Semyonovsky Regiment was deployed and used artillery to break up demonstrations and shell workers’ districts. On December 18, with around a thousand people dead and parts of the city in ruins, the workers surrendered. After a final spasm in Moscow, the uprisings ended. 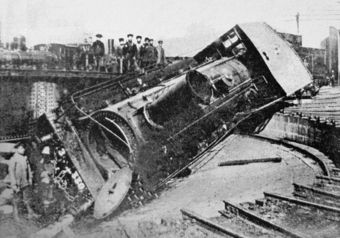 Russian Revolution of 1905: A locomotive overturned by striking workers at the main railway depot in Tiflis in 1905.

According to figures presented in the Duma by Professor Maksim Kovalevsky, by April 1906, more than 14,000 people had been executed and 75,000 imprisoned.

Following the Revolution of 1905, the Tsar made last attempts to save his regime and offered reforms similar to those of most rulers pressured by a revolutionary movement. The military remained loyal throughout the Revolution of 1905, as shown by their shooting of revolutionaries when ordered by the Tsar, making overthrow difficult. These reforms were outlined in a precursor to the Constitution of 1906 known as the October Manifesto which created the Imperial Duma. The Russian Constitution of 1906, also known as the Fundamental Laws, set up a multiparty system and a limited constitutional monarchy. The revolutionaries were quelled and satisfied with the reforms, but it was not enough to prevent the 1917 revolution that would later topple the Tsar’s regime.