The Kellogg-Briand Pact intended to establish “the renunciation of war as an instrument of national policy,” but was largely ineffective in preventing conflict or war.

Identify why the Kellogg-Briand Pact was concieved and signed

annexation
The political transition of land from the control of one entity to another. It is also the incorporation of unclaimed land into a state’s sovereignty, which is in most cases legitimate. In international law it is the forcible transition of one state’s territory by another state or the legal process by which a city acquires land. Usually, it is implied that the territory and population being annexed is the smaller, more peripheral, and weaker of the two merging entities, barring physical size.
multilateral treaty
A treaty to which three or more sovereign states are parties. Each party owes the same obligations to all other parties, except to the extent that they have stated reservations.
Kellogg–Briand Pact
A 1928 international agreement in which signatory states promised not to use war to resolve “disputes or conflicts of whatever nature or of whatever origin they may be, which may arise among them.”

The Kellogg–Briand Pact (or Pact of Paris, officially General Treaty for Renunciation of War as an Instrument of National Policy) is a 1928 international agreement in which signatory states promised not to use war to resolve “disputes or conflicts of whatever nature or of whatever origin they may be, which may arise among them.” Parties failing to abide by this promise “should be denied of the benefits furnished by this treaty.” It was signed by Germany, France, and the United States on August 27, 1928, and by most other nations soon after. Sponsored by France and the U.S., the Pact renounces the use of war and calls for the peaceful settlement of disputes. Similar provisions were incorporated into the Charter of the United Nations and other treaties and it became a stepping-stone to a more activist American policy. It is named after its authors, United States Secretary of State Frank B. Kellogg and French foreign minister Aristide Briand.

The texts of the treaty reads:

Persuaded that the time has come when a frank renunciation of war as an instrument of national policy should be made to the end that the peaceful and friendly relations now existing betweentheir peoples may be perpetuated; Convinced that all changes in their relations with one another should be sought only bypacific means and be the result of a peaceful and orderly process, and that any signatory Power which shall hereafter seek to promote its national interests by resort to war should be denied the benefits furnished by this Treaty;Hopeful that, encouraged by their example, all the other nations of the world will join in this humane endeavour and by adhering to the present Treaty as soon as it comes into force bring their peoples within the scope of its beneficient provisions, thus uniting the civilized nations of the world in a common renunciation of war as an instrument of their national policy;Have decided to conclude a Treaty…

In the United States, the Senate approved the treaty overwhelmingly, 85–1, with only Wisconsin Republican John J. Blaine voting against. While the U.S. Senate did not add any reservation to the treaty, it did pass a measure which interpreted the treaty as not infringing upon the United States’ right of self-defense and not obliging the nation to enforce it by taking action against those who violated it. 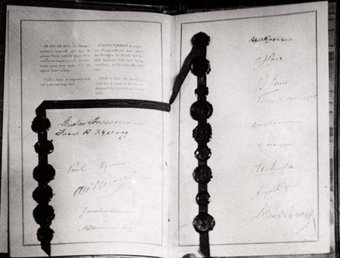 As a practical matter, the Kellogg–Briand Pact did not live up to its aim of ending war or stopping the rise of militarism, and in this sense it made no immediate contribution to international peace and proved to be ineffective in the years to come. Moreover, the pact erased the legal distinction between war and peace because the signatories, having renounced the use of war, began to wage wars without declaring them as in the Japanese invasion of Manchuria in 1931, the Italian invasion of Abyssinia in 1935, the Spanish Civil War in 1936, the Soviet invasion of Finland in 1939, and the German and Soviet Union invasions of Poland. Nevertheless, the pact is an important multilateral treaty because, in addition to binding the particular nations that signed it, it has also served as one of the legal bases establishing the international norms that the threat or use of military force in contravention of international law, as well as the territorial acquisitions resulting from it, are unlawful.

Notably, the pact served as the legal basis for the creation of the notion of crime against peace. It was for committing this crime that the Nuremberg Tribunal and Tokyo Tribunal tried and sentenced a number of people responsible for starting World War II.

The interdiction of aggressive war was confirmed and broadened by the United Nations Charter, which provides in article 2, paragraph 4, that “All Members shall refrain in their international relations from the threat or use of force against the territorial integrity or political independence of any state, or in any other manner inconsistent with the Purposes of the United Nations.” One legal consequence of this is that it is clearly unlawful to annex territory by force. However, neither this nor the original treaty has prevented the subsequent use of annexation. More broadly, there is a strong presumption against the legality of using or threatening military force against another country. Nations that have resorted to the use of force since the Charter came into effect have typically invoked self-defense or the right of collective defense.