The dissolution of the German, Russian, Austro-Hungarian, and Ottoman empires created a number of new countries in eastern Europe and the Middle East, often with large ethnic minorities. This caused numerous conflicts and hostilities.

Give examples of self-determination in the interwar period

Nansen passport
Internationally recognized refugee travel documents, first issued by the League of Nations to stateless refugees.
self-determination
A principle of international law that states that peoples, based on respect for the principle of equal rights and fair equality of opportunity, have the right to freely choose their sovereignty and international political status with no interference.
Treaty of Brest-Litovsk
A peace treaty signed on March 3, 1918, between the new Bolshevik government of Soviet Russia and the Central Powers (Germany, Austria-Hungary, Bulgaria, and the Ottoman Empire), that ended Russia’s participation in World War I. Part of its terms was the renouncement of Russia’s claims on Poland, Finland, Estonia, Latvia, Belarus, Ukraine, and Lithuania.

Geopolitical Consequences of World War I

The years 1919-24 were marked by turmoil as Europe struggled to recover from the devastation of the First World War and the destabilizing effects of the loss of four large historic empires: the German Empire, Austro-Hungarian Empire, Russian Empire, and the Ottoman Empire. There were numerous new nations in Eastern Europe, most of them small.

Internally these new countries tended to have substantial ethnic minorities who wished to unite with neighboring states where their ethnicity dominated. For example, Czechoslovakia had Germans, Poles, Ruthenians and Ukrainians, Slovaks, and Hungarians. Millions of Germans found themselves in the newly created countries as minorities. More than two million ethnic Hungarians found themselves living outside of Hungary in Slovakia, Romania, and Yugoslavia. Many of these national minorities found themselves in bad situations because the modern governments were intent on defining the national character of the countries, often at the expense of the minorities. The League of Nations sponsored various Minority Treaties in an attempt to deal with the problem, but with the decline of the League in the 1930s, these treaties became increasingly unenforceable. One consequence of the massive redrawing of borders and the political changes in the aftermath of World War I was the large number of European refugees. These and the refugees of the Russian Civil War led to the creation of the Nansen passport.

Ethnic minorities made the location of the frontiers generally unstable. Where the frontiers have remained unchanged since 1918, there has often been the expulsion of an ethnic group, such as the Sudeten Germans. Economic and military cooperation among these small states was minimal, ensuring that the defeated powers of Germany and the Soviet Union retained a latent capacity to dominate the region. In the immediate aftermath of the war, defeat drove cooperation between Germany and the Soviet Union but ultimately these two powers would compete to dominate eastern Europe.

At the end of the war, the Allies occupied Constantinople (Istanbul) and the Ottoman government collapsed. The Treaty of Sèvres, a plan designed by the Allies to dismember the remaining Ottoman territories, was signed on August 10, 1920, although it was never ratified by the Sultan.

The occupation of Smyrna by Greece on May 18, 1919, triggered a nationalist movement to rescind the terms of the treaty. Turkish revolutionaries led by Mustafa Kemal Atatürk, a successful Ottoman commander, rejected the terms enforced at Sèvres and under the guise of General Inspector of the Ottoman Army, left Istanbul for Samsun to organize the remaining Ottoman forces to resist the terms of the treaty.

After Turkish resistance gained control over Anatolia and Istanbul, the Sèvres treaty was superseded by the Treaty of Lausanne, which formally ended all hostilities and led to the creation of the modern Turkish Republic. As a result, Turkey became the only power of World War I to overturn the terms of its defeat and negotiate with the Allies as an equal. 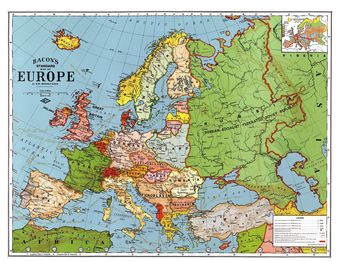 Europe in 1923: The dissolution of the German, Russian, Austro-Hungarian, and Ottoman empires created a number of new countries in eastern Europe, such as Poland, Finland, Yugoslavia, and Turkey.

The right of peoples to self-determination is a cardinal principle in modern international law. It states that peoples, based on respect for the principle of equal rights and fair equality of opportunity, have the right to freely choose their sovereignty and international political status with no interference. The explicit terms of this principle can be traced to the Atlantic Charter, signed on August 14, 1941, by Franklin D. Roosevelt, President of the United States of America, and Winston Churchill, Prime Minister of the United Kingdom. It also is derived from principles espoused by United States President Woodrow Wilson following World War I, after which some new nation states were formed or previous states revived after the dissolution of empires. The principle does not state how the decision is to be made nor what the outcome should be, whether it be independence, federation, protection, some form of autonomy, or full assimilation. Neither does it state what the delimitation between peoples should be—nor what constitutes a people. There are conflicting definitions and legal criteria for determining which groups may legitimately claim the right to self-determination.

The employment of imperialism through the expansion of empires and the concept of political sovereignty, as developed after the Treaty of Westphalia, also explain the emergence of self-determination during the modern era. During and after the Industrial Revolution, many groups of people recognized their shared history, geography, language, and customs. Nationalism emerged as a uniting ideology not only between competing powers, but also for groups that felt subordinated or disenfranchised inside larger states; in this situation, self-determination can be seen as a reaction to imperialism. Such groups often pursued independence and sovereignty over territory, but sometimes a different sense of autonomy has been pursued or achieved.

The revolt of New World British colonists in North America during the mid-1770s has been seen as the first assertion of the right of national and democratic self-determination because of the explicit invocation of natural law, the natural rights of man, and the consent of and sovereignty by, the people governed; these ideas were inspired particularly by John Locke’s enlightened writings of the previous century. Thomas Jefferson further promoted the notion that the will of the people was supreme, especially through authorship of the United States Declaration of Independence which inspired Europeans throughout the 19th century. Leading up to World War I, in Europe there was a rise of nationalism, with nations such as Greece, Hungary, Poland, and Bulgaria seeking or winning their independence.

Woodrow Wilson revived America’s commitment to self-determination, at least for European states, during World War I. When the Bolsheviks came to power in Russia in November 1917, they called for Russia’s immediate withdrawal as a member of the Allies of World War I. They also supported the right of all nations, including colonies, to self-determination. The 1918 Constitution of the Soviet Union acknowledged the right of secession for its constituent republics.

This presented a challenge to Wilson’s more limited demands. In January 1918 Wilson issued his Fourteen Points that among other things, called for adjustment of colonial claims insofar as the interests of colonial powers had equal weight with the claims of subject peoples. The Treaty of Brest-Litovsk in March 1918 led to Russia’s exit from the war and the independence of Armenia, Finland, Estonia, Latvia, Ukraine, Lithuania, Georgia, and Poland.

The end of the war led to the dissolution of the defeated Austro-Hungarian Empire and the creation by the Allies of Czechoslovakia and the union of the State of Slovenes, Croats and Serbs and the Kingdom of Serbia as new states. However, this imposition of states where some nationalities (especially Poles, Czechs, and Serbs and Romanians) were given power over nationalities who disliked and distrusted them eventually helped lead to World War II. Also Germany lost land after WWI: Northern Slesvig voted to return to Denmark after a referendum. The defeated Ottoman empire was dissolved into the Republic of Turkey and several smaller nations, including Yemen, plus the new Middle East Allied “mandates” of Syria and Lebanon (future Syria, Lebanon and Hatay State), Palestine (future Transjordan and Israel), Mesopotamia (future Iraq). The League of Nations was proposed as much as a means of consolidating these new states, as a path to peace.

During the 1920s and 1930s there were some successful movements for self-determination in the beginnings of the process of decolonization. In the Statute of Westminster the United Kingdom granted independence to Canada, New Zealand, Newfoundland, the Irish Free State, the Commonwealth of Australia, and the Union of South Africa after the British parliament declared itself as incapable of passing laws over them without their consent. Egypt, Afghanistan, and Iraq also achieved independence from Britain and Lebanon from France. Other efforts were unsuccessful, like the Indian independence movement. Italy, Japan, and Germany all initiated new efforts to bring certain territories under their control, leading to World War II.