Under Louis XIV, France witnessed successful reforms and growth as a global power, but financial strain imposed by multiple wars left the state bankrupt. Under Louis XV, lost wars and limited reforms reversed the gains of the initial years of economic recovery.

Examine the excessive spending of Louis XIV and Louis XV and the consequences of their actions for the French government.

parlements
Provincial appellate courts in the France of the Ancien Régime, i.e. before the French Revolution. They were not legislative bodies but rather the court of final appeal of the judicial system. They typically wielded much power over a wide range of subject matter, particularly taxation. Laws and edicts issued by the Crown were not official in their respective jurisdictions until assent was given by publishing them. The members were aristocrats who had bought or inherited their offices and were independent of the King.
Seven Years’ War
A world war fought between 1754 and 1763, the main conflict occurring in the seven-year period from 1756 to 1763. It involved every European great power of the time except the Ottoman Empire, spanning five continents and affecting Europe, the Americas, West Africa, India, and the Philippines. The conflict split Europe into two coalitions, led by Great Britain on one side and France on the other. For the first time, aiming to curtail Britain and Prussia’s ever-growing might, France formed a grand coalition of its own, which ended with failure as Britain rose as the world’s predominant force, altering the European balance of power.
Treaty of Aix-la-Chapelle of 1748
A treaty, sometimes called the Treaty of Aachen, that ended the War of the Austrian Succession following a congress assembled in 1748 at the Free Imperial City of Aachen and signed by Great Britain, France, and the Dutch Republic.
taille
A direct land tax on the French peasantry and non-nobles in Ancien Régime France. The tax was imposed on each household based on how much land it held.

Louis XIV, known as the “Sun King,” reigned over France from 1643 until 1715. He began his personal reign with effective fiscal reforms. In 1661, the treasury verged on bankruptcy. To rectify the situation, Louis chose Jean-Baptiste Colbert as Controller-General of Finances in 1665. Colbert reduced the national debt through more efficient taxation. Although his tax reform proved difficult, excellent results were achieved and the deficit of 1661 turned into a surplus in 1666. In 1667, the net receipts had risen to 20 million pounds sterling while expenditure had fallen to 11 million, leaving a surplus of 9 million pounds.

However, the gains were insufficient to support Louis’s policies. During his reign, France fought three major wars: the Franco-Dutch War, the War of the League of Augsburg, and the War of the Spanish Succession. There were also two lesser conflicts: the War of Devolution and the War of the Reunions. Warfare defined the foreign policies of Louis XIV, seen by the king as the ideal way to enhance his glory. Even in peacetime, he concentrated on preparing for the next war, including reforms that enlarged and modernized the French military.

Furthermore, in order to centralize his power, Louis recognized that he had to weaken the power of the nobility, which he achieved partly by attaching nobles to his court at Versailles and thus virtually controlling their daily lives. Apartments were built to house those willing to pay court to the king, but the pensions and privileges necessary to live in a style appropriate to their rank were only possible by waiting constantly on Louis. This strategy, although effective, turned out to be very costly, particularly given the king’s extravagant choices and lavish lifestyle.

To support the reorganized and enlarged army, the panoply of Versailles, and the growing civil administration, the king needed more money. Methods of collecting taxes were costly and inefficient. Direct taxes passed through the hands of many intermediate officials; indirect taxes were collected by private individuals called tax farmers who made a substantial profit. The state always received far less than what the taxpayers actually paid. Yet the main weakness arose from an old bargain between the French crown and nobility: the king could rule without much opposition from the nobility if only he refrained from taxing them. Only the lowest classes paid direct taxes and that meant mostly peasants since many bourgeois obtained exemptions. Later after 1700, the French ministers who were supported by Madame De Maintenon (the king’s second wife) were able to convince the King to change his fiscal policy. Louis was willing to tax the nobles but unwilling to fall under their control, and only towards the close of his reign under extreme stress of war was he able, for the first time in French history, to impose direct taxes on the aristocratic elements of the population. This was a step toward equality before the law and sound public finance, but so many concessions and exemptions were won by nobles and bourgeois that the reform lost much of its value.

In addition to successful finance reforms, Louis encouraged industry, fostered trade and commerce, and sponsored the founding of an overseas empire. His political and military victories as well as numerous cultural achievements helped raise France to a preeminent position in Europe. Historians note, however, that the powerful position of Louis XIV’s France came at a financial cost that could not be balanced by his reforms. The considerable foreign, military, and domestic expenditure impoverished and bankrupted France. 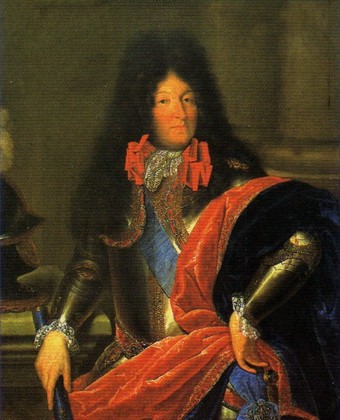 Voltaire’s history, The Age of Louis XIV, named Louis’s reign as not only one of the four great ages in which reason and culture flourished, but the greatest ever. The success, however, came at the financial cost that bankrupted France.

Louis XV: The Disintegration of the Empire

Louis XV succeeded his great-grandfather Louis XIV at the age of five. Until he reached maturity in 1723, his kingdom was ruled by Philippe d’Orléans, Duke of Orléans as Regent of France. Cardinal Fleury was his chief minister from 1726 until the Cardinal’s death in 1743, at which time the young king took sole control of the kingdom. Fleury’s rule was he most peaceful and prosperous period of the reign of Louis XV. After the financial and social disruptions suffered at the end of the reign of Louis XIV, the rule of Fleury is seen by historians as a period of “recovery.” Fleury stabilized the French currency and balanced the budget in 1738. Economic expansion was a major goal of the government. Communications were improved with the completion of the Saint-Quentin canal in 1738 and the systematic building of a national road network. By the middle of the 18th century, France had the most modern and extensive road network in the world. Modern highways, which stretched from Paris to the most distant borders of France, helped to advance trade. In foreign relations, Fleury sought peace by trying to maintain alliance with England and pursuing reconciliation with Spain.

After Fleury’s death, Louis failed to continue his policies. Following the advice of his mistress, Marquise de Pompadour, he supported the policy of fiscal justice designed by Machault d’Arnouville. In order to finance the budget deficit, Machault d’Arnouville created a tax on the twentieth of all revenues that affected the privileged classes as well as commoners. This breach in the privileged status of the aristocracy and the clergy, normally exempt from taxes, was another attempt to impose taxes on the privileged, but the new tax was received with violent protest from the privileged classes. It was opposed by the clergy and by the parlements (provincial appellate court staffed by aristocrats). Pressed and eventually won over by his entourage at court, the king gave in and exempted the clergy from the twentieth in 1751. Eventually, the twentieth became a mere increase in the already existing taille, the most important direct tax of the monarchy from which privileged classes were exempted. It was another defeat in the taxation war waged against the privileged classes.

Louis’s greatest failure was perhaps his foreign policy. As a result of lost wars, Louis was forced to return the Austrian Netherlands (modern-day Belgium) territory won at the Battle of Fontenoy of 1745 but returned to Austria by the terms of the Treaty of Aix-la-Chapelle of 1748. He also ceded New France in North America to Spain and Great Britain at the conclusion of the Seven Years’ War in 1763. Although he incorporated the territories of Lorraine and Corsica into the kingdom of France, the loss of colonies in North America, the Caribbean, and West Africa as well as the weakening of influence in India demonstrated that France was no longer a colonial European power with access to lucrative overseas opportunities (although France did maintain control over Guadeloupe and Martinique, sources of profitable sugar).

Most historians argue that Louis XV’s decisions damaged the power of France, weakened the treasury, discredited the absolute monarchy, and made it more vulnerable to distrust and destruction. Lost wars and financial strains that they imposed, ineffective reforms, and religious feuds, combined with the king’s reputation as a man interested more in women and hunting than in ruling France, weakened the monarchy that was left in a state of economic crisis. 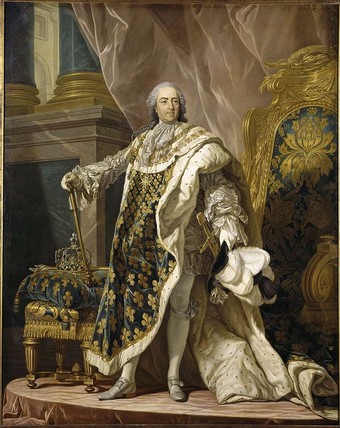 Under Louis XV,  financial strain imposed by wars, particularly by the disastrous for France Seven Years’ War and by the excesses of the royal court, contributed to fiscal problems and the national unrest that in the end culminated in the French Revolution of 1789.