Taxes and the Three Estates

The taxation system under the Ancien Régime largely excluded the nobles and the clergy from taxation while the commoners, particularly the peasantry, paid disproportionately high direct taxes.

Distinguish between the three Estates and their burdens of taxation.

the estates of the realm
The broad orders of social hierarchy used in Christendom (Christian Europe) from the medieval period to early modern Europe. Different systems for dividing society members into estates evolved over time. The best known system is a three-estate system of the  French Ancien Régime used until the French Revolution (1789–1799). This system was made up of clergy (the First Estate), nobility (the Second Estate), and commoners (the Third Estate).
parlements
Provincial appellate courts in the France of the Ancien Régime, i.e. before the French Revolution. They were not legislative bodies but rather the court of final appeal of the judicial system. They typically wielded much power over a wide range of subject matter, particularly taxation. Laws and edicts issued by the Crown were not official in their respective jurisdictions until assent was given by publishing them. The members were aristocrats who had bought or inherited their offices and were independent of the King.
Ancien Régime
The social and political system established in the Kingdom of France from approximately the 15th century until the latter part of the 18th century under the late Valois and Bourbon dynasties. The term is occasionally used to refer to the similar feudal social and political order of the time elsewhere in Europe.
taille
A direct land tax on the French peasantry and non-nobles in Ancien Régime France. The tax was imposed on each household and was based on how much land it held.
tithe
A one-tenth part of something, paid as a contribution to a religious organization or compulsory tax to government. Today, the fee is voluntary and paid in cash, checks, or stocks, whereas historically it was required and paid in kind, such as with agricultural products.

Estates of the Realm and Taxation

France under the Ancien Régime (before the French Revolution) divided society into three estates: the First Estate (clergy); the Second Estate (nobility); and the Third Estate (commoners). The king was not considered part of any estate. One critical difference between the estates of the realm was the burden of taxation. The nobles and the clergy were largely excluded from taxation (with the exception of a modest quit-rent, an ad valorem tax on land) while the commoners paid disproportionately high direct taxes. In practice, this meant mostly the peasants because many bourgeois obtained exemptions. The system was outrageously unjust in throwing a heavy tax burden on the poor and powerless.

The desire for more efficient tax collection was one of the major causes for French administrative and royal centralization. The taille, a direct land tax on the peasantry and non-nobles, became a major source of royal income. Exempted from the taille were clergy and nobles (except for non-noble lands they held in “pays d’état;” see below), officers of the crown, military personnel, magistrates, university professors and students, and certain cities (“villes franches”) such as Paris. Peasants and nobles alike were required to pay one-tenth of their income or produce to the church (the tithe).Although exempted from the taille, the church was required to pay the crown a tax called the “free gift,” which it collected from its office holders at roughly 1/20 the price of the office.

There were three kinds of provinces: the “pays d’élection,” the “pays d’état,” and the “pays d’imposition.” In the “pays d’élection” (the longest held possessions of the French crown) the assessment and collection of taxes were originally trusted to elected officials, but later these positions were bought. The tax was generally “personal,” which meant it was attached to non-noble individuals. In the “pays d’état” (provinces with provincial estates), tax assessment was established by local councils and the tax was generally “real,” which meant that it was attached to non-noble lands (nobles possessing such lands were required to pay taxes on them). “Pays d’imposition” were recently conquered lands that had their own local historical institutions, although taxation was overseen by the royal administrator.

In the decades leading to the French Revolution, peasants paid a land tax to the state (the taille) and a 5% property tax (the vingtième; see below). All paid a tax on the number of people in the family (capitation), depending on the status of the taxpayer (from poor to prince). Further royal and seigneurial obligations might be paid in several ways: in labor, in kind, or rarely, in coin. Peasants were also obligated to their landlords for rent in cash, a payment related to their amount of annual production, and taxes on the use of the nobles’ mills, wine-presses, and bakeries. 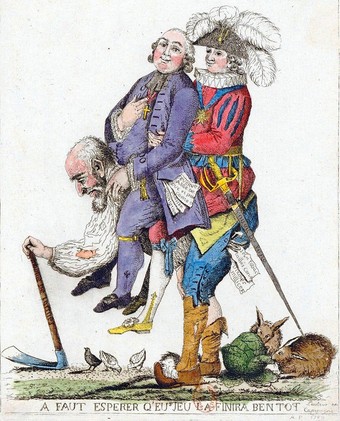 Caricature showing the Third Estate carrying the First and Second Estates on its back, Bibliothèque Nationale de France, c. 1788.

The tax system in pre-revolutionary France largely exempted the nobles and the clergy from taxes. The tax burden therefore devolved to the peasants, wage-earners, and the professional and business classes, also known as the Third Estate. Further, people from less-privileged walks of life were blocked from acquiring even petty positions of power in the regime, which caused further resentment.

As the French state continuously struggled with the budget deficit, attempts to reform the skewed system took place under both Louis XIV and Louis XV. The greatest challenge to systemic change was an old bargain between the French crown and the nobility: the king could rule without much opposition from the nobility if only he refrained from taxing them. Consequently, attempts to impose taxes on the privileged — both the nobility and the clergy — were a great source of tension between the monarchy and the First and the Second Estates.

Already in 1648, when Louis XIV was still a minor and his mother Queen Anne acted as a regent and Cardinal Mazarin as her chief minister, the two attempted to tax members of the Parlement de Paris. The members not only refused to comply, but also ordered all of Mazarin’s earlier financial edicts burned. The later wars of Louis XIV, although successful politically and militarily, exhausted the state’s budget, which eventually led the King to accept reform proposals. Only towards the end of Louis’s reign did the French ministers supported by Madame De Maintenon (the King’s second wife) convince the King to change his fiscal policy. Louis was willing to tax the nobles but unwilling to fall under their control, and only under extreme stress of war was he able, for the first time in French history, to impose direct taxes on the aristocracy.  Several additional tax systems were created, including the “capitation” (begun in 1695), which touched every person including nobles and the clergy (although exemption could be bought for a large one-time sum) and the “dixième” (1710–17, restarted in 1733), enacted to support the military, which was a true tax on income and property value. This was a step toward equality before the law and sound public finance, but so many concessions and exemptions were won by nobles and bourgeois that the reform lost much of its value.

Louis XV continued the tax reform initiated by his predecessor. Following the advice of his mistress, Marquise de Pompadour, he supported the policy of fiscal justice designed by Machault d’Arnouville. In order to finance the budget deficit, in 1749 Machault d’Arnouville created a tax on the twentieth of all revenues that affected the privileged classes as well as commoners. Known as the “vingtième” (or “one-twentieth”), it was enacted to reduce the royal deficit. This tax continued throughout the Ancien Régime. It was based solely on revenues, requiring 5% of net earnings from land, property, commerce, industry, and official offices. It was meant to touch all citizens regardless of status. However, the clergy, the regions with “pays d’état,” and the parlements protested. Consequently, the clergy won exemption, the “pays d’état” won reduced rates, and the parlements halted new income statements, effectively making the “vingtième” a far less efficient tax than it was designed to be. The financial needs of the Seven Years’ War led to a second (1756–1780) and then a third (1760–1763) “vingtième” being created. With all the exemptions and reductions won by the privileged classes, however, the burden of the new tax once again fell on the poorest.

Historians consider the unjust taxation system continued under Louis XVI to be one of the causes of the French Revolution.