Life in the USSR

Marxism-Leninism, proclaimed the official ideology of the Soviet Union by Joseph Stalin, was based on Karl Marx’s economic theory but included important differences specific to Stalin’s totalitarian government.

class consciousness
A term used in political theory, especially Marxism, to refer to the belief a person holds regarding their social class or economic rank in society, the structure of their class, and their class interests; used to point toward a distinctions between a “class in itself,” defined as a category of people with a common relation to the means of production, and a “class for itself,” defined as a stratum organized in active pursuit of its own interests.
Socialism in One Country
A theory put forth by Joseph Stalin in 1924 which held that given the defeat of all the communist revolutions in Europe in 1917–1921 except Russia’s, the Soviet Union should begin to strengthen itself internally. This turn toward national communism was a shift from the previously held Marxist position that socialism must be established globally (world communism).
bourgeoisie
In Marxist philosophy, the social class that came to own the means of production during modern industrialization and whose societal concerns are the value of property and the preservation of capital, to ensure the perpetuation of their economic supremacy in society.

Marxism-Leninism is a political philosophy or worldview founded on ideas of Marxism and Leninism that seeks to establish socialist states and develop them further. Marxist–Leninists espouse an array of views depending on their understanding of Marxism and Leninism, but generally support the idea of a vanguard party, one-party state, state-dominance over the economy, internationalism, opposition to bourgeois democracy, and opposition to capitalism. It remains the official ideology of the ruling parties of China, Cuba, Laos, and Vietnam, and was the official ideology of the Communist Party of the Soviet Union (CPSU) and the other ruling parties making up the Eastern Bloc.

Marxism-Leninism first became a distinct philosophical movement in the Soviet Union during the 1920s, when Joseph Stalin and his supporters gained control of the Russian Communist Party (bolsheviks). It rejected the notions, common among Marxists at the time, of world revolution as a prerequisite for building socialism in Russia (in favor of the concept of Socialism in One Country), and of a gradual transition from capitalism to socialism (signified by the introduction of the First Five-Year Plan). The internationalism of Marxism–Leninism was expressed in supporting revolutions in foreign countries.

The goal of Marxism-Leninism is the development of a state into a socialist republic through the leadership of a revolutionary vanguard, the part of the working class who come to class consciousness as a result of the dialectic of class struggle. The socialist state, representing a “dictatorship of the proletariat” (as opposed to that of the bourgeoisie) is governed by the party of the revolutionary vanguard through the process of democratic centralism, which Vladimir Lenin described as “diversity in discussion, unity in action.” It seeks the development of socialism into the full realization of communism, a classless social system with common ownership of the means of production and full equality of all members of society.

In Marxist philosophy, Leninism is the body of political theory developed by Lenin for the democratic organization of a revolutionary vanguard party and the achievement of a dictatorship of the proletariat as political prelude to the establishment of the socialist mode of production. Since Karl Marx barely, if ever, wrote about how the socialist mode of production would function, these tasks were left for Lenin to solve. His main contribution to Marxist thought is the concept of the vanguard party of the working class, conceived as a close-knit central organization led by intellectuals rather than by the working class itself. The party was open only to a few of the workers since the workers in Russia still had not developed class consciousness and needed to be educated to reach such a state. Lenin believed that the vanguard party could initiate policies in the name of the working class even if the working class did not support them, since the party would know what was best for the workers since its functionaries had attained consciousness.

Leninism was by definition authoritarianism. Lenin, through his interpretation of Marx’s theory of the state (which views the state as an oppressive organ of the ruling class), had no qualms of forcing change upon the country. The repressive powers of the state were to be used to transform the country and strip of the former ruling class of their wealth. In contrast to Karl Marx, who believed that the socialist revolution would be composed of and led by the working class alone, Lenin argued that a socialist revolution did not necessarily need to be led by or composed of the working class alone, instead contending that a revolution needed to be led by the oppressed classes of society, which in Russia was the peasant class. 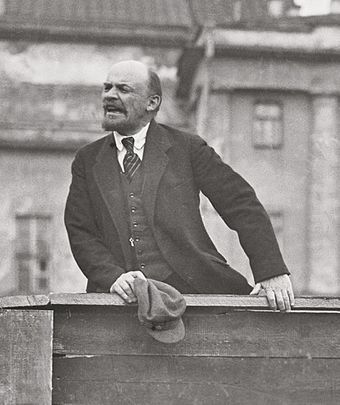 Vladimir Lenin: Vladimir Lenin, leader of the Soviet Union from 1917 to 1924, was one of the most influential figures of the 20th Century.

Within five years of Vladimir Lenin’s death in 1924, Stalin completed his rise to power in the Soviet Union. According to G. Lisichkin (1989), Stalin compiled Marxism-Leninism as a separate ideology in his book Concerning Questions of Leninism. During the period of Stalin’s rule in the Soviet Union, Marxism–Leninism was proclaimed the official ideology of the state. There is no definite agreement among historians about whether or Stalin actually followed the principles established by Marx and Lenin.

A key point of conflict between Marxism-Leninism and other tendencies is that whereas Marxism-Leninism defines Stalin’s USSR as a workers’ state, other types of communists and Marxists deny this, and Trotskyists specifically consider it a deformed or degenerated workers’ state. Trotskyists in particular believe that Stalinism contradicted authentic Marxism and Leninism, and they initially used the term “Bolshevik-Leninism” to describe their own ideology of anti-Stalinist communism.

Stalinism, while not an ideology per se, refers to Stalin’s thoughts and policies. Stalin’s introduction of the concept “Socialism in One Country” in 1924 was a major turning point in Soviet ideological discourse, which claimed that the Soviet Union did not need a socialist world revolution to construct a socialist society. The theory held that given the defeat of all the communist revolutions in Europe in 1917–1921 except Russia’s, the Soviet Union should begin to strengthen itself internally. That turn toward national communism was a shift from the previously held Marxist position that socialism must be established globally (world communism), and it was in opposition to Leon Trotsky’s theory of permanent revolution. Four years later, Stalin initiated his “Second Revolution” with the introduction of state socialism and central planning. In the early-1930s, he initiated collectivization of Soviet agriculture, by deprivatizing agriculture, not putting it under the responsibility of the state but instead creating peasant cooperatives. With the initiation of his “Second Revolution”, Stalin launched the “Cult of Lenin” and a cult of personality centered upon himself.

Stalin’s regime was a totalitarian state under his dictatorship. He exercised extensive personal control over the Communist Party and unleashed an unprecedented level of violence to eliminate any potential threat to his regime. While Stalin exercised major control over political initiatives, their implementation was in the control of localities, often with local leaders interpreting the policies in a way that served themselves best. This abuse of power by local leaders exacerbated the violent purges and terror campaigns carried out by Stalin against members of the Party deemed to be traitors. Stalin unleashed the Great Terror campaign against alleged “socially dangerous” and “counterrevolutionary” persons that resulted in the Great Purge of 1936–38, during which 1.5 million people were arrested from 1937–38 and 681,692 of those executed. The Stalinist era saw the introduction of a system of forced labor for convicts and political dissidents, the Gulag system created in the early 1930s. 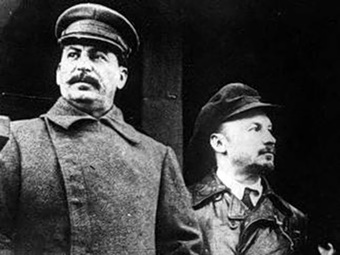