On March 5, 1946, Winston Churchill gave a speech declaring that an “iron curtain” had descended across Europe, pointing to efforts by the Soviet Union to block itself and its satellite states from open contact with the West.

Warsaw Pact
A collective defense treaty among the Soviet Union and seven other Soviet satellite states in Central and Eastern Europe during the Cold War.
NATO
An intergovernmental military alliance signed on April 4, 1949 and including the five Treaty of Brussels states (Belgium, the Netherlands, Luxembourg, France, and the United Kingdom) plus the United States, Canada, Portugal, Italy, Norway, Denmark, and Iceland.
“iron curtain”
A term indicating the imaginary boundary dividing Europe into two separate areas from the end of World War II in 1945 until the end of the Cold War in 1991.

The Iron Curtain formed the imaginary boundary dividing Europe into two separate areas from the end of World War II in 1945 until the end of the Cold War in 1991. The term symbolized efforts by the Soviet Union to block itself and its satellite states from open contact with the West and non-Soviet-controlled areas. On the east side of the Iron Curtain were the countries connected to or influenced by the Soviet Union. On either side of the Iron Curtain, states developed their own international economic and military alliances:

Physically, the Iron Curtain took the form of border defenses between the countries of Europe in the middle of the continent. The most notable border was marked by the Berlin Wall and its “Checkpoint Charlie,” which served as a symbol of the Curtain as a whole.

The antagonism between the Soviet Union and the West that came to be described as the “iron curtain” had various origins.

The Allied Powers and the Central Powers backed the White movement against the Bolsheviks during the 1918–1920 Russian Civil War, a fact not forgotten by the Soviets.

A series of events during and after World War II exacerbated tensions, including the Soviet-German pact during the first two years of the war leading to subsequent invasions, the perceived delay of an amphibious invasion of German-occupied Europe, the western Allies’ support of the Atlantic Charter, disagreement in wartime conferences over the fate of Eastern Europe, the Soviets’ creation of an Eastern Bloc of Soviet satellite states, western Allies scrapping the Morgenthau Plan to support the rebuilding of German industry, and the Marshall Plan.

In the course of World War II, Stalin determined to acquire a buffer area against Germany, with pro-Soviet states on its border in an Eastern bloc. Stalin’s aims led to strained relations at the Yalta Conference (February 1945) and the subsequent Potsdam Conference (August 1945). People in the West expressed opposition to Soviet domination over the buffer states, leading to growing fear that the Soviets were building an empire that might threaten them and their interests.

Nonetheless, at the Potsdam Conference, the Allies assigned parts of Poland, Finland, Romania, Germany, and the Balkans to Soviet control or influence. In return, Stalin promised the Western Allies he would allow those territories the right to national self-determination. Despite Soviet cooperation during the war, these concessions left many in the West uneasy. In particular, Churchill feared that the United States might return to its prewar isolationism, leaving the exhausted European states unable to resist Soviet demands.

Winston Churchill’s “Sinews of Peace” address of March 5, 1946, at Westminster College, used the term “iron curtain” in the context of Soviet-dominated Eastern Europe:

From Stettin in the Baltic to Trieste in the Adriatic an “Iron Curtain” has descended across the continent. Behind that line lie all the capitals of the ancient states of Central and Eastern Europe. Warsaw, Berlin, Prague, Vienna, Budapest, Belgrade, Bucharest and Sofia; all these famous cities and the populations around them lie in what I must call the Soviet sphere, and all are subject, in one form or another, not only to Soviet influence but to a very high and in some cases increasing measure of control from Moscow.

Churchill mentioned in his speech that regions under the Soviet Union’s control were expanding their leverage and power without any restriction. He asserted that to put a brake on this phenomenon, the commanding force of and strong unity between the UK and the U.S. was necessary.

Much of the Western public still regarded the Soviet Union as a close ally in the context of the recent defeat of Nazi Germany and of Japan. Although not well received at the time, the phrase iron curtain gained popularity as a shorthand reference to the division of Europe as the Cold War strengthened. The Iron Curtain served to keep people in and information out, and people throughout the West eventually came to accept the metaphor.

Stalin took note of Churchill’s speech and responded in Pravda (the official newspaper of the Communist Party of the Soviet Union) soon afterward. He accused Churchill of warmongering, and defended Soviet “friendship” with eastern European states as a necessary safeguard against another invasion. He further accused Churchill of hoping to install right-wing governments in eastern Europe to agitate those states against the Soviet Union. Andrei Zhdanov, Stalin’s chief propagandist, used the term against the West in an August 1946 speech: 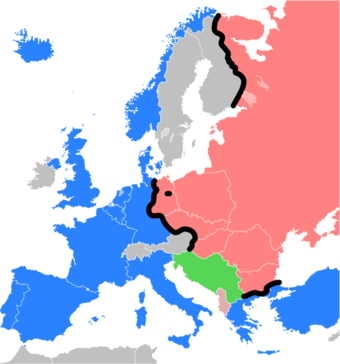 Iron Curtain: The Iron Curtain depicted as a black line. Warsaw Pact countries on one side of the Iron Curtain appear shaded red; NATO members on the other shaded blue; militarily neutral countries shaded gray. The black dot represents Berlin. Yugoslavia, although communist-ruled, remained largely independent of the two major blocs and is shaded green. Communist Albania broke off contacts with the Soviet Union in the early 1960s, aligning itself with the People’s Republic of China after the Sino-Soviet split; it appears stripe-hatched with grey.