The Second French Empire was the Imperial Bonapartist regime of Napoleon III from 1852 to 1870, between the Second Republic and the Third Republic, an era of great industrialization, urbanization (including the massive rebuilding of Paris by Baron Haussmann), and economic growth, as well as major disasters in foreign affairs.

Franco-Prussian War
A conflict between the Second French Empire of Napoleon III and the German states of the North German Confederation led by the Kingdom of Prussia. The conflict was caused by Prussian ambitions to extend German unification and French fears of the shift in the European balance of power that would result if the Prussians succeeded. A series of swift Prussian and German victories in eastern France, culminating in the Siege of Metz and the Battle of Sedan, saw Napoleon III captured and the army of the Second Empire decisively defeated.
Napoleon III
The only President (1848–52) of the French Second Republic and, as Napoleon III, the Emperor (1852–70) of the Second French Empire. He was the nephew and heir of Napoleon I. He was the first President of France to be elected by a direct popular vote. He was blocked by the Constitution and Parliament from running for a second term, so he organized a coup d’état in 1851 and then took the throne as Napoleon III on December 2, 1852, the 48th anniversary of Napoleon I’s coronation. He remains the longest-serving French head of state since the French Revolution.
reconstruction of Paris
A vast public works program commissioned by Emperor Napoléon III and directed by his prefect of the Seine, Georges-Eugène Haussmann, between 1853 and 1870. It included the demolition of crowded and unhealthy medieval neighborhoods; the building of wide avenues, parks, and squares; the annexation of the suburbs surrounding Paris; and the construction of new sewers, fountains, and aqueducts. Haussmann’s work met with fierce opposition and was finally dismissed by Napoleon III in 1870, but work on his projects continued until 1927. The street plan and distinctive appearance of the center of Paris today is largely the result of Haussmann’s renovation.

The constitution of the Second Republic, ratified in September 1848, was extremely flawed and permitted no effective resolution between the President and the Assembly in case of dispute. In 1848, a nephew of Napoléon Bonaparte, Louis-Napoleon Bonaparte, was elected President of France through universal male suffrage, taking 74% of the vote. He did this with the support of the Parti de l’Ordre after running against Louis Eugène Cavaignac. Subsequently, he was in constant conflict with the members of the National Assembly.

Contrary to the Party’s expectations that Louis-Napoleon would be easy to manipulate (Adolphe Thiers had called him a “cretin whom we will lead [by the nose]”), he proved himself an agile and cunning politician. He succeeded in imposing his choices and decisions on the Assembly, which had once again become conservative in the aftermath of the June Days Uprising in 1848.

The provisions of the constitution that prohibited an incumbent president from seeking re-election appeared to force the end of Louis-Napoleon’s rule in December 1852. Not one to admit defeat, Louis-Napoleon spent the first half of 1851 trying to change the constitution through Parliament so he could be re-elected. Bonaparte traveled through the provinces and organized petitions to rally popular support but in January 1851, the Parliament voted no.

Louis-Napoleon believed that he was supported by the people, and he decided to retain power by other means. His half-brother Morny and a few close advisers began to quietly organize a coup d’état. They brought Major General Jacques Leroy de Saint Arnaud, a former captain from the French Foreign Legion and a commander of French forces in Algeria, and other officers from the French army in North Africa to provide military backing for the coup.

On the morning of December 2, troops led by Saint-Arnaud occupied strategic points in Paris from the Champs-Élysées to the Tuileries. Top opposition leaders were arrested and six edicts promulgated to establish the rule of Louis-Napoleon. The Assemblée Nationale was dissolved and universal male suffrage restored. Louis-Napoleon declared that a new constitution was being framed and said he intended to restore a “system established by the First Consul.” He thus declared himself President for Life, and in 1852, Emperor of France, Napoleon III.

France was ruled by Emperor Napoleon III from 1852 to 1870. During the first years of the Empire, Napoleon’s government imposed censorship and harsh repressive measures against his opponents. Some six thousand were imprisoned or sent to penal colonies until 1859. Thousands more went into voluntary exile abroad, including Victor Hugo. From 1862 onward, he relaxed government censorship, and his regime came to be known as the “Liberal Empire.” Many of his opponents returned to France and became members of the National Assembly.

Napoleon III is best known today for his grand reconstruction of Paris, carried out by his prefect of the Seine, Baron Haussmann. He launched similar public works projects in Marseille, Lyon, and other French cities. Napoleon III modernized the French banking system, greatly expanded and consolidated the French railway system, and made the French merchant marine the second largest in the world. He promoted the building of the Suez Canal and established modern agriculture, which ended famines in France and made France an agricultural exporter. Napoleon III negotiated the 1860 Cobden–Chevalier free trade agreement with Britain and similar agreements with France’s other European trading partners. Social reforms included giving French workers the right to strike and the right to organize. Women’s education greatly expanded, as did the list of required subjects in public schools. 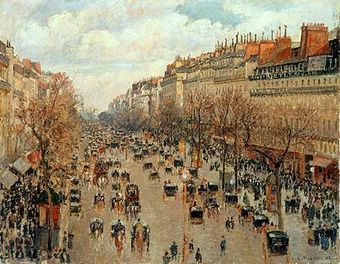 In foreign policy, Napoleon III aimed to reassert French influence in Europe and around the world. He was a supporter of popular sovereignty and nationalism. Despite his promises in 1852 of a peaceful reign, the Emperor could not resist the temptations of glory in foreign affairs. He was visionary, mysterious, and secretive; had a poor staff; and kept running afoul of his domestic supporters. In the end he was incompetent as a diplomat. Napoleon did have some successes: he strengthened French control over Algeria, established bases in Africa, began the takeover of Indochina, and opened trade with China. He facilitated a French company building the Suez Canal, which Britain could not stop. In Europe, however, Napoleon failed again and again. The Crimean war of 1854–56 produced no gains, although his alliance with Britain did defeat Russia. His regime assisted Italian unification and in doing so, annexed Savoy and the County of Nice to France; at the same time, his forces defended the Papal States against annexation by Italy. On the other hand, his army’s intervention in Mexico to create a Second Mexican Empire under French protection ended in failure.

The Prussian chancellor Otto von Bismarck provoked Napoleon into declaring war on Prussia in July 1870, beginning the Franco-Prussian War. The French troops were swiftly defeated in the following weeks, and on September 1, the main army, which the emperor himself was with, was trapped at Sedan and forced to surrender. A republic was quickly proclaimed in Paris, but the war was far from over. As it was clear that Prussia would expect territorial concessions, the provisional government vowed to continue resistance. The Prussians laid siege to Paris, and new armies mustered by France failed to alter this situation. The French capital began experiencing severe food shortages, to the extent that even the animals in the zoo were eaten. As the city was bombarded by Prussian siege guns in January 1871, King William of Prussia was proclaimed Emperor of Germany in the Hall of Mirrors at Versailles. Shortly afterwards, Paris surrendered. The subsequent peace treaty was harsh. France ceded Alsace and Lorraine to Germany and had to pay an indemnity of 5 billion francs. German troops were to remain in the country until it was paid off. Meanwhile, the fallen Napoleon III went into exile in England where he died in 1873. 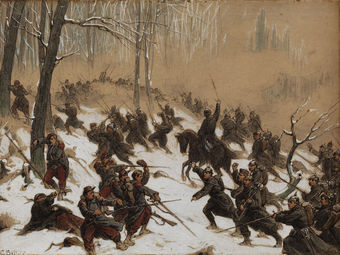 The structure of the French government during the Second Empire was little changed from the First. But Emperor Napoleon III stressed his own imperial role as the foundation of the government. If government was to guide the people toward domestic justice and external peace, it was his role as emperor, holding his power by universal male suffrage and representing all of the people, to function as supreme leader and safeguard the achievements of the revolution. He had so often, while in prison or in exile, chastised previous oligarchical governments for neglecting social questions that it was imperative France now prioritize their solutions. His answer was to organize a system of government based on the principles of the “Napoleonic Idea.” This meant that the emperor, the elect of the people as the representative of the democracy, ruled supreme. He himself drew power and legitimacy from his role as representative of the great Napoleon I of France, “who had sprung armed from the French Revolution like Minerva from the head of Jove.”

The anti-parliamentary French Constitution of 1852, instituted by Napoleon III on January 14, 1852, was largely a repetition of that of 1848. All executive power was entrusted to the emperor who as head of state was solely responsible to the people. The people of the Empire, lacking democratic rights, were to rely on the benevolence of the emperor rather than on the benevolence of politicians. He was to nominate the members of the council of state, whose duty it was to prepare the laws, and of the senate, a body permanently established as a constituent part of the empire.

One innovation was made, namely that the Legislative Body was elected by universal suffrage, but it had no right of initiative as all laws were proposed by the executive power. This new political change was rapidly followed by the same consequence as of Brumaire. On December 2, 1852, France, still under the effect of Napoleon’s legacy and the fear of anarchy, conferred almost unanimously by a plebiscite the supreme power and the title of emperor upon Napoleon III.

The Legislative Body was not allowed to elect its own president, regulate its own procedure, propose a law or an amendment, vote on the budget in detail, or make its deliberations public. Similarly, universal suffrage was supervised and controlled by means of official candidature by forbidding free speech and action in electoral matters to the Opposition and gerrymandering in such a way as to overwhelm the Liberal vote in the mass of the rural population.

For seven years France had no democratic life. The Empire governed by a series of plebiscites. Up to 1857 the Opposition did not exist. From then till 1860 it was reduced to five members: Darimon, Émile Ollivier, Hénon, Jules Favre, and Ernest Picard. The royalists waited inactively after the new and unsuccessful attempt made at Frohsdorf in 1853 by a combination of the legitimists and Orléanists to recreate a living monarchy out of the ruin of two royal families.