Tsar Alexander I wanted to reform the serf system but was stymied. With his news law, only 7,300 male peasants with families were freed (about 0.5%), but all classes except the serfs could own land, a privilege previously confined to the nobility.

serf
The status of many peasants under feudalism, specifically relating to manorialism. It was a condition of bondage, which developed primarily during the High Middle Ages in Europe and lasted in some countries until the mid-19th century. Those who occupied a plot of land were required to work for the lord of the manor who owned that land, and in return were entitled to protection, justice, and the right to exploit certain fields within the manor for their own subsistence. They were often required not only to work on the lord’s fields, but also his mines, forests, and roads.
Age of Enlightenment
An intellectual movement that dominated the world of ideas in Europe in the 18th century. It centered on reason as the primary source of authority and legitimacy and advanced ideals like liberty, progress, tolerance, fraternity, constitutional government, and separation of church and state. It was marked by an emphasis on the scientific method and reductionism along with increased questioning of religious orthodoxy.
state-owned peasants
A special class in 18th-19th century Russia that during some periods comprised half of the agricultural population. In contrast to private Russian serfs, these were considered personally free although attached to the land.

Alexander I reigned as Emperor of Russia from March 23, 1801, to December 1, 1825. He was born in Saint Petersburg to Grand Duke Paul Petrovich, later Emperor Paul I, and succeeded to the throne after his father was murdered. He ruled Russia during the chaotic period of the Napoleonic Wars. As prince and emperor, Alexander often used liberal rhetoric, but continued Russia’s absolutist policies in practice. In the first years of his reign, he initiated some minor social reforms and in 1803–04 major, liberal educational reforms, such as building more universities. He promised constitutional reforms and a desperately needed reform of serfdom in Russia but made no concrete proposals. Alexander appointed Mikhail Speransky, the son of a village priest, as one of his closest advisers. The Collegia was abolished and replaced by the The State Council, created to improve legislation. Plans were also made to set up a parliament and sign a constitution.

In the second half of his reign he was increasingly arbitrary, reactionary, and fearful of plots against him; he ended many earlier reforms. He purged schools of foreign teachers as education became more religiously oriented and politically conservative. Speransky was replaced as adviser with the strict artillery inspector Aleksey Arakcheyev, who oversaw the creation of military settlements. Alexander died of typhus in December 1825 while on a trip to southern Russia. He left no children as heirs and both of his brothers wanted the other to become emperor. After a period of great confusion that included the failed Decembrist revolt of liberal army officers, he was succeeded by his younger brother, Nicholas I.

At first, the Orthodox Church exercised little influence on Alexander’s reign. The young tsar was determined to reform the inefficient, highly centralized systems of government upon which Russian relied. While he retained the old ministers for a time, one of the first acts of his reign was to appoint the Private Committee, comprising young and enthusiastic friends of his own—Victor Kochubey, Nikolay Novosiltsev, Pavel Stroganov, and Adam Jerzy Czartoryski—to draw up a plan of domestic reform, which was supposed to result in the establishment of a constitutional monarchy in accordance with the teachings of the Age of Enlightenment.

In a few years the liberal Mikhail Speransky became one of the Tsar’s closest advisors, and drew up many plans for elaborate reforms. By the Government reform of Alexander I the old Collegia were abolished and new Ministries created in their place, headed by ministers responsible to the Crown. A Council of Ministers under the chairmanship of the Sovereign dealt with all interdepartmental matters. The State Council was created in order to improve technique of legislation. It was intended to become the Second Chamber of representative legislature. The Governing Senate was reorganized as the Supreme Court of the Empire. The codification of the laws initiated in 1801 was never carried out during his reign.

When Alexander’s reign began, there were three universities in Russia, at Moscow, Vilna (Vilnius), and Dorpat (Tartu). These were strengthened, and three others were founded at St. Petersburg, Kharkov, and Kazan. Literary and scientific bodies were established or encouraged, and the reign became noted for the aid lent to the sciences and arts by the Emperor and the wealthy nobility. Alexander later expelled foreign scholars.

After 1815, military settlements (farms worked by soldiers and their families under military control) were introduced, with the idea of making the army, or part of it, self-supporting economically and providing it with recruits.

The Status of Serfs

Alexander wanted to resolve another crucial issue in Russia—the status of the serfs, although this was not achieved until 1861 during the reign of his nephew Alexander II. His advisers quietly discussed the options at length. Cautiously, he extended the right to own land to most classes of subjects, including state-owned peasants, in 1801 and created a new social category of “free agriculturalist” for peasants voluntarily emancipated by their masters in 1803. The new laws allowed all classes except the serfs to own land, a privilege previously confined to the nobility. As the title of the 1803 decree, informally known as “Decree on Free Ploughmen” says, the serfs were freed and endowed with land by the will on the serf owner under payment or work obligations. During the reign of Alexander I only about 7,300 male peasants (with families) or about 0.5% of serfs were freed.

The Russian state also continued to support serfdom due to military conscription. The conscripted serfs dramatically increased the size of the Russian military, leading to victory in the Napoleonic Wars and Russo-Persian Wars; this did not change the disparity between Russia and the rest of Western Europe, who were experiencing agricultural and industrial revolutions. Compared to Western Europe it was clear that Russia was at an economic disadvantage. European philosophers during the Age of Enlightenment criticized serfdom and compared it to medieval labor practices which were almost non-existent in the rest of continent. Most Russian Nobles were not interested in change toward western labor practices that Catherine the Great proposed. Instead they preferred to mortgage serfs for profit. In 1820, 20% of all serfs were mortgaged to state credit institutions by their owners. This was increased to 66% in 1859. 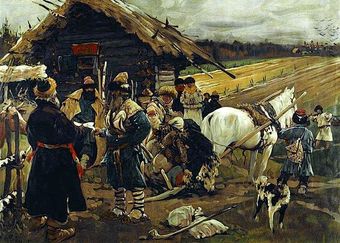 A Peasant Leaving His Landlord on Yuriev Day A painting by Sergei V. Ivanov from 1908, depicting a family of serfs leaving their landlord on Yuriev Day, a two-week period that was the only time of the year when the Russian peasants were free to move from one landowner to another before the abolition of serfdom in 1861.