Territorial Gains Under Alexander I

24.3.2: Territorial Gains Under Alexander I

Tsar Alexander I, one of the most brilliant diplomats of his time, focused his foreign affairs on the Napoleonic Wars and the expansion of Russian territory.

List some of the territorial gains made by Tsar Alexander I

Napoleonic Wars
A series of major conflicts pitting the French Empire and its allies, led by Napoleon I, against a fluctuating array of European powers formed into various coalitions, primarily led and financed by the United Kingdom. The wars resulted from the unresolved disputes associated with the French Revolution and the Revolutionary Wars, which had raged for years before concluding with the Treaty of Amiens in 1802. The resumption of hostilities the following year paved the way for more than a decade of constant warfare. The wars had profound consequences for global and European history, leading to the spread of nationalism and liberalism, the rise of the British Empire as the world’s premier power, the independence movements in Latin America and subsequent collapse of the Spanish Empire, the fundamental reorganization of German and Italian territories into larger states, and the establishment of radically new methods in warfare.
Russo-Persian War (1804–13)
One of the many wars between the Persian Empire and Imperial Russia that like many of their wars began as a territorial dispute. The new Persian king, Fath Ali Shah Qajar, wanted to consolidate the northernmost reaches of his kingdom—modern day Georgia—which had been annexed by Tsar Paul I several years after the Russo-Persian War of 1796. Like his Persian counterpart, the Tsar Alexander I was also new to the throne and equally determined to control the disputed territories. The war ended in 1813 with the Treaty of Gulistan, which irrevocably ceded the previously disputed territory of Georgia to Imperial Russia, but added the Iranian territories of Dagestan, most of what is nowadays Azerbaijan, and minor parts of Armenia.
Caucasus region
A strategically valuable region at the border of Europe and Asia, situated between the Black and the Caspian seas. It is home to the Caucasus Mountains, which contain Europe’s highest mountain, Mount Elbrus (18,510 feet).

Tsar Alexander I was perhaps the most brilliant diplomat of his time. His primary focus was not on domestic policy but foreign affairs, particularly Napoleon. Fearing Napoleon’s expansionist ambitions and the growth of French power, Alexander joined Britain and Austria against Napoleon. Napoleon defeated the Russians and Austrians at Austerlitz in 1805 and the Russians at Friedland in 1807. The Battle of Austerlitz in 1805 was one of the most important and decisive engagements of the Napoleonic Wars. In what is widely regarded as the greatest victory achieved by Napoleon, the Grande Armée of France defeated a larger Russian and Austrian army. Austerlitz brought the War of the Third Coalition to a rapid end, with the Treaty of Pressburg signed by the Austrians later in the month. The battle is often cited as a tactical masterpiece, in the same league as other historic engagements like Cannae or Arbela.

After these defeats, Alexander was forced to sue for peace with France, and with the Treaty of Tilsit, signed in 1807, he became Napoleon’s ally. Russia lost little territory under the treaty, and Alexander made use of his alliance with Napoleon for further expansion. By the Finnish War he wrested the Grand Duchy of Finland from Sweden in 1809, and acquired Bessarabia from Turkey as a result of the Russo-Turkish War, 1806-1812.

Alexander was determined to acquire disputed territories in the Caucasus region and beyond, mainly held by Persia. His predecessors had already waged small wars against Persia, but they had not been able to consolidate Russian authority over the regions, so these were either ceded or conquered back by Persia.

After the Russian armies officially liberated allied Georgia from centuries-long Persian occupation in 1801, , Alexander fought the Russo-Persian War (1804–13), the first full-scale war against the neighboring Persia, over the control and consolidation of Georgia and eventually Azerbaijan, Dagestan, and the entire Caucasus.

After nine long years of battle, Russia managed to end the war on highly favorable terms, completing Russian consolidation and suzerainty over major parts of the Caucasus including the gains of Dagestan, Georgia, most of Azerbaijan, and other regions and territories in the Caucasus over Persia. By now, Russia had full, comfortable access to the Black Sea and Caspian Sea and would use these newly gained grounds for further wars against Persia and Turkey.

The Russo-French alliance gradually became strained. Napoleon was concerned about Russia’s intentions in the strategically vital Bosporus and Dardanelles straits. At the same time, Alexander viewed the Duchy of Warsaw, the French-controlled reconstituted Polish state, with suspicion. The requirement of joining France’s Continental Blockade against Britain was a serious disruption of Russian commerce, and in 1810 Alexander repudiated the obligation. In June 1812, Napoleon invaded Russia with 600,000 troops—a force twice as large as the Russian regular army. Napoleon hoped to inflict a major defeat on the Russians and force Alexander to sue for peace. As Napoleon pushed the Russian forces back, however, he became seriously overextended. Obstinate Russian forces, members of which declared the Patriotic War, brought Napoleon a disastrous defeat: Less than 30,000 of his troops returned to their homeland. Victory came at a high cost as the areas of the country the French army had marched through lay in ruins. The campaign was a turning point in the Napoleonic Wars. The reputation of Napoleon was severely shaken and French hegemony in Europe was dramatically weakened. The Grande Armée, made up of French and allied invasion forces, was reduced to a fraction of its initial strength. These events triggered a major shift in European politics. France’s ally Prussia, soon followed by Austria, broke its imposed alliance with France and switched sides. This triggered the War of the Sixth Coalition. 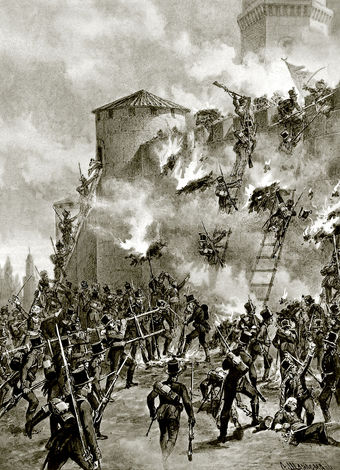 Congress of Vienna and Beyond

As the French retreated, the Russians pursued them into Central and Western Europe and to the gates of Paris. After the allies defeated Napoleon, Alexander became known as the savior of Europe and played a prominent role in the redrawing of the map of Europe at the Congress of Vienna in 1815. In the same year, Alexander initiated the creation of the Holy Alliance, a loose agreement pledging the rulers of the nations involved—including most of Europe—to act according to Christian principles. More pragmatically, in 1814 Russia, Britain, Austria, and Prussia formed the Quadruple Alliance. When Napoleon suddenly reappeared, Russia was part of the alliance that chased him down. The conservative Bourbons were back in power in Paris and on good terms with Russia. The allies created an international system to maintain the territorial status quo and prevent the resurgence of an expansionist France. The Quadruple Alliance, confirmed by a number of international conferences, ensured Russia’s influence in Europe.

At the same time, Russia continued its expansion. The Congress of Vienna, held in Vienna from November 1814 to June 1815, aimed to provide a long-term peace plan for Europe by settling critical issues arising from the French Revolutionary Wars and the Napoleonic Wars. The tsar had two main goals: to gain control of Poland and promote the peaceful coexistence of European nations. The Congress created the Congress Poland (formerly the Duchy of Warsaw), to which Alexander granted a constitution. Though officially the Kingdom of Poland was a state with considerable political autonomy guaranteed by a liberal constitution, its rulers, the Russian Emperors, generally disregarded any restrictions on their power. Effectively it was little more than a puppet state of the Russian Empire. Thus, Alexander I became the constitutional monarch of Poland while remaining the autocratic tsar of Russia. He was also the monarch of Finland, which had been annexed in 1809 and awarded autonomous status. The Congress finalized Russia control of Finland.

Despite the liberal, romantic inclinations of his youth, later in his rule Alexander I grew steadily more conservative, isolated from the day-to-day affairs of the state, and inclined to religious mysticism. Once a supporter of limited liberalism, as seen in his approval of the Constitution of the Kingdom of Poland in 1815, at the end of 1818 Alexander’s views began to change. A revolutionary conspiracy among the officers of the guard and a foolish plot to kidnap him on his way to the Congress of Aix-la-Chapelle are said to have shaken the foundations of his liberalism. At Aix he came for the first time into intimate contact with Metternich, initiating the ascendancy of conservatism over the mind of the Russian emperor and in the councils of Europe. It was the apparent triumph of disorder in the revolutions of Naples and Piedmont, combined with increasingly disquieting symptoms of discontent in France, Germany, and among his own people, that completed Alexander’s conversion.

Alexander had upheld the ideal of a free confederation of the European states, symbolized by the Holy Alliance, against the policy of a dictatorship of the great powers, symbolized by the Quadruple Treaty; he had protested against the claims of collective Europe to interfere in the internal concerns of the sovereign states. But on November 19, 1820, he signed the Troppau Protocol, which consecrated the principle of intervention against revolution and wrecked the harmony of the concert created at the Congress of Vienna.

The lofty hopes that the tsar had once held for his country were frustrated by its immense size and backwardness. While vacationing on the Black Sea in 1825, Alexander fell ill with typhus and died at only 47, although there were unfounded stories that he faked his own death, became a monk, and wandered the Siberian wilderness for many years afterwards.