On December 26, 1825, Russian army officers led about 3,000 soldiers in a protest against Nicholas I’s assumption of the throne after the death of Tsar Alexander I.

Identify the impetuses for the Decembrist Revolt

Peter the Great
He ruled the Tsardom of Russia and later the Russian Empire from May 7, 1682, until his death, jointly ruling before 1696 with his elder half-brother, Ivan V. Through a number of successful wars, he expanded the Tsardom into a much larger empire that became a major European power. He led a cultural revolution that replaced some of the traditionalist and medieval social and political systems with ones that were modern, scientific, westernized, and based on The Enlightenment. His reforms made a lasting impact on Russia, and many institutions of Russian government trace their origins to his reign.
Union of Salvation
The first secret political society of the Decembrists. Founded in 1816 at the initiative of Alexander Nikolayevich Muravyov by a group of young officers of the Russian army who had taken part in the Patriotic War of 1812 and foreign campaigns of 1813–1814. They aimed at the abolishment of serfdom and introduction of constitutional monarchy by means of armed revolt at the time of next emperor’s succession to the throne.

The Decembrist revolt took place in Imperial Russia on December 26, 1825. Russian army officers led about 3,000 soldiers in a protest against Nicholas I’s assumption of the throne after his elder brother Constantine removed himself from the line of succession.

The Decembrist revolt was an aristocratic movement whose chief actors were army officers and members of the nobility. The reasons for Decembrist Uprising were manifold: opposition on part of the nobility to the regime that successfully limited its privileges through its peasant policy spread among a section of young officers with liberal and even radical ideas, along with fears among the nationalist section of society inspired by some of Alexander’s policies. Officers were particularly angry that Alexander granted Poland a constitution while Russia remained without one.

Several clandestine organizations were preparing for an uprising after Alexander’s death. There was confusion about who would succeed him because the next in line, his brother Constantine Pavlovich, relinquished his right to the throne. A group of officers commanding about 3,000 men refused to swear allegiance to the new tsar, Alexander’s brother Nicholas, proclaiming instead their loyalty to the idea of a Russian constitution. Because these events occurred in December 1825, the rebels were called Decembrists. Nicholas easily overcame the revolt, and the surviving rebels were exiled to Siberia.

In 1816, several officers of the Imperial Russian Guard founded a society known as the Union of Salvation, or of the Faithful and True Sons of the Fatherland. The society acquired a more liberal cast after it was joined by the idealistic Pavel Pestel. After a mutiny in the Semenovsky Regiment in 1820, the society decided to suspend activity in 1821. Two groups, however, continued to function secretly: a Southern Society, based at Tulchin, a small garrison town in Ukraine, in which Pestel was the outstanding figure, and a Northern Society, based at St Petersburg, led by Guard officers Nikita Muraviev, Prince S. P. Trubetskoy and Prince Eugene Obolensky. The political aims of the more moderate Northern Society were a British-style constitutional monarchy with a limited franchise, the abolition of serfdom, and equality before the law. The Southern Society, under Pestel’s influence, was more radical and wanted to abolish the monarchy, establish a republic, and redistribute land, taking half into state ownership and dividing the rest among the peasants.

At first, many officers were encouraged by Tsar Alexander’s early liberal reformation of Russian society and politics. In 1819 Count Mikhail Mikhailovich Speransky was appointed as the Governor of Siberia, with the task of reforming local government. Equally, in 1818 the Tsar asked Count Nikolay Nikolayevich Novosiltsev to draw up a constitution. However, internal and external unrest, which the Tsar believed stemmed from political liberalization, led to a series of repressions and a return to a former government of restriction and conservatism.

Meanwhile, spurred by their experiences of the Napoleonic Wars and realizing many of the harsh indignities through which the peasant soldiers were forced, Decembrist officers and sympathizers displayed their contempt for the regime by rejecting court lifestyle, wearing their cavalry swords at balls (indicating their unwillingness to dance), and committing themselves to academic study. This new lifestyle captured the spirit of the times, as a willingness to embrace both the peasant (i.e. the “Russian way of life”) and ongoing reformative movements abroad.

The Events of the Revolt

When Tsar Alexander I died on December 1, 1825, the royal guards swore allegiance to the presumed heir, Alexander’s brother Constantine. When Constantine made his renunciation public and Nicholas stepped forward to assume the throne, the Northern Society acted. With the capital in temporary confusion and one oath to Constantine having already been sworn, the society scrambled in secret meetings to convince regimental leaders not to swear allegiance to Nicholas. These efforts would culminate in the Decembrist Revolt. The leaders of the society (many of whom belonged to the high aristocracy) elected Prince Sergei Trubetskoy as interim dictator.

On the morning of December 26, a group of officers commanding about 3,000 men assembled in Senate Square, where they refused to swear allegiance to the new tsar, Nicholas I, proclaiming instead their loyalty to Constantine and their Decembrist Constitution. They expected to be joined by the rest of the troops stationed in Saint Petersburg, but were disappointed. The revolt was further hampered when it was deserted by its supposed leader Prince Trubetskoy, who had a last minute change of heart and failed to turn up at the Square. His second in command, Colonel Bulatov, also vanished from the scene. After a hurried consultation the rebels appointed Prince Eugene Obolensky as a replacement leader.

For long hours there was a stand-off between the 3,000 rebels and the 9,000 loyal troops stationed outside the Senate building, with some desultory shooting from the rebel side. A vast crowd of civilian on-lookers began fraternizing with the rebels, but did not join the action. Eventually Nicholas, the new Tsar, appeared in person at the square and sent Count Mikhail Miloradovich, a military hero who was greatly respected by ordinary soldiers, to parley with the rebels. Miloradovich was fatally shot by Pyotr Kakhovsky while delivering a public address to defuse the situation. At the same time, a rebelling grenadier squad, led by lieutenant Nikolay Panov, entered the Winter Palace but failed to seize it and retreated.

After spending most of the day in fruitless attempts to parley with the rebel force, Nicholas ordered a cavalry charge which slipped on the icy cobbles and retired in disorder. Eventually, at the end of the day, Nicholas ordered three artillery pieces to open fire, with devastating effect. To avoid the slaughter the rebels broke and ran. Some attempted to regroup on the frozen surface of the river Neva to the north but were targeted there by the artillery and suffered many casualties. As the ice was broken by the cannon fire, many of the dead and dying were cast into the river. After a nighttime mopping-up operation by loyal army and police units, the revolt in the north came to an end. The surviving rebels were tried and sentenced to exile in Siberia.

For the most part, the rebellion led Nicholas to turn away from the modernization program begun by Peter the Great and champion the doctrine of Orthodoxy, Autocracy, and Nationality.

Though defeated, the Decembrists did effect some change on the regime. Their dissatisfaction forced Nicholas to turn his attention inward to address the issues of the empire. To some extent, the Decembrists were in the tradition of a long line of palace revolutionaries who wanted to place their candidate on the throne, but because the Decembrists also wanted to implement classical liberalism, their revolt has been considered the beginning of a revolutionary movement. The uprising was the first open breach between the government and reformist elements of the Russian nobility, which would subsequently widen. 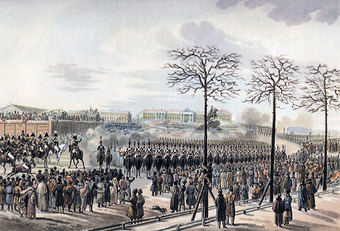 Decembrist Revolt Decembrists at the Senate Square. On December 26, 1825, Russian army officers led about 3,000 soldiers in a protest against Nicholas I’s assumption of the throne after his elder brother Constantine removed himself from the line of succession.