The Wars of Nicholas I

In war, Tsar Nicholas I was successful against Russia’s neighboring southern rivals, Persia and the Ottoman Empire, seizing the last territories in the Caucasus held by Persia. Later in his rule, however, he led Russia into the Crimean War (1853–56) with disastrous results.

Recall some of the wars fought by Nicholas I

Eastern Question
Refers to the strategic competition and political considerations of the European Great Powers in light of the political and economic instability in the Ottoman Empire from the late 18th to early 20th centuries. Characterized as the “sick man of Europe,” the relative weakening of the empire’s military strength in the second half of the 18th century threatened to undermine the fragile balance of power system largely shaped by the Concert of Europe.
Crimean War
A military conflict fought from October 1853 to March 1856 in which the Russian Empire lost to an alliance of France, Britain, the Ottoman Empire, and Sardinia. The immediate cause involved the rights of Christian minorities in the Holy Land, part of the Ottoman Empire. The French promoted the rights of Roman Catholics while Russia promoted those of the Eastern Orthodox Church. The longer-term causes involved the decline of the Ottoman Empire and the unwillingness of Britain and France to allow Russia to gain territory and power at Ottoman expense.
“Official Nationality”
The dominant ideological doctrine of Russian emperor Nicholas I. It was “the Russian version of a general European ideology of restoration and reaction” that followed the Napoleonic Wars. It was a reactionary policy based on orthodoxy in religion, autocracy in government, and Russian nationalism.

Nicholas I was the Emperor of Russia from 1825 until 1855 as well as King of Poland and Grand Duke of Finland. He is best-known as a political conservative whose reign was marked by geographical expansion, repression of dissent, economic stagnation, poor administrative policies, a corrupt bureaucracy, and frequent wars that culminated in Russia’s disastrous defeat in the Crimean War of 1853-56. His biographer Nicholas V. Riasanovsky says that Nicholas displayed determination, singleness of purpose, and an iron will, along with a powerful sense of duty and a dedication to hard work. He saw himself as a soldier – a junior officer totally consumed by spit and polish. Trained as an engineer, he was a stickler for minute detail. In his public persona, says Riasanovsky, “Nicholas I came to represent autocracy personified: infinitely majestic, determined and powerful, hard as stone, and relentless as fate.”

His reign had an ideology called “Official Nationality” that was proclaimed officially in 1833. It was a reactionary policy based on orthodoxy in religion, autocracy in government, and Russian nationalism. He was the younger brother of his predecessor, Alexander I. Nicholas inherited his brother’s throne despite the failed Decembrist revolt against him and went on to become the most reactionary of all Russian leaders. His aggressive foreign policy involved many expensive wars, with a disastrous effect on the empire’s finances.

He was successful against Russia’s neighboring southern rivals as he seized the last territories in the Caucasus held by Persia (comprising modern day Armenia and Azerbaijan) by successfully ending the Russo-Persian War (1826-28). Russia had gained what is now Dagestan, Georgia, Azerbaijan, and Armenia from Persia, and therefore had the clear geopolitical and territorial upper hand in the Caucasus. He ended the Russo-Turkish War (1828–29) successfully as well. Later, however, he led Russia into the Crimean War (1853–56) with disastrous results. Historians emphasize that his micromanagement of the armies hindered his generals, as did his misguided strategy. Fuller notes that historians have frequently concluded that “the reign of Nicholas I was a catastrophic failure in both domestic and foreign policy.” On the eve of his death, the Russian Empire reached its geographical zenith, spanning over 7.7 million square miles but in desperate need of reform.

For much of Nicholas’s reign, Russia was seen as a major military power with considerable strength. At last the Crimean war at the end of his reign demonstrated to the world what no one had previously realized: Russia was militarily weak, technologically backward, and administratively incompetent. Despite his grand ambitions toward the south and Turkey, Russia had not built its railroad network in that direction, and communications were bad. The bureaucracy was riddled with graft, corruption, and inefficiency and was unprepared for war. The Navy was weak and technologically backward; the Army, although very large, was good only for parades, suffering from colonels who pocketed their men’s pay, poor morale, and disconnection with the latest technology developed by Britain and France. By war’s end, the Russian leadership was determined to reform the Army and the society.

In foreign policy, Nicholas I acted as the protector of ruling legitimism and guardian against revolution. In 1830, after a popular uprising occurred in France, the Poles in Russian Poland revolted. They resented limitation of the privileges of the Polish minority in the lands annexed by Russia in the 18th century, and sought to reestablish the 1772 borders of Poland. Nicholas crushed the rebellion, abrogated the Polish constitution, and reduced Congress Poland to the status of a Russian province, Privislinsky Krai.

In 1848, when a series of revolutions convulsed Europe, Nicholas was in the forefront of reaction. In 1849, he helped the Habsburgs suppress the uprising in Hungary and urged Prussia not to adopt a liberal constitution.

While Nicholas was attempting to maintain the status quo in Europe, he followed a somewhat more aggressive policy toward the neighboring empires to the south, namely the Ottoman Empire and Persia. Nicholas was widely believed to be following the traditional Russian policy of resolving the so-called Eastern Question by seeking to partition the Ottoman Empire and establish a protectorate over the Orthodox population of the Balkans, still largely under Ottoman control in the 1820s. In fact, in line with his commitment to upholding the status quo in Europe, he feared any attempt to devour the decaying Ottoman Empire would both upset its ally Austria, which also had interests in the Balkans, and bring about an Anglo-French coalition in defense of the Ottomans.

Further, during the war of 1828-29, the Russians had defeated the Ottomans in every battle fought in the field and advanced deep into the Balkans, but the discovered that they lacked the necessary logistical strength to take Constantinople. Nicholas’s policy towards the Ottoman Empire was to use the Treaty of Küçük Kaynarca, which gave Russia a vague right to be the protector of the Orthodox peoples in the Balkans, to place the Ottoman Empire into the Russian sphere of influence. This was seen as a more achievable goal than conquering the entire Ottoman Empire. Nicholas actually wanted to preserve the Ottoman Empire as a stable but weak state that would be unable to stand up to Russia, as he viewed the country first and foremost as a European power and regarded Europe as more important than the Middle East.

In 1826-1828, Nicholas fought the Russo-Persian War (1826–28), which ended with Persia being forced to cede its last remaining territories in the Caucasus, comprising modern-day Armenia, Azerbaijan, and Iğdır. By now, Russia had conquered all Caucasian territories of Iran in both the North and South Caucasus, comprising modern-day Georgia, Dagestan, Armenia, and Azerbaijan, through the course of the 19th century.

Fearing the results of an Ottoman defeat by Russia, in 1854 Britain, France, the Kingdom of Sardinia, and the Ottoman Empire joined forces in the conflict known as the Crimean War to the Ottomans and Western Europeans and in Russia as the “Eastern War.” In April 1854, Austria signed a defensive pact with Prussia. Thus, Russia found itself in a war with the whole of Europe .

Austria offered the Ottomans diplomatic support and Prussia remained neutral, thus leaving Russia without any allies on the continent. The European allies landed in Crimea and laid siege to the well-fortified Russian base at Sebastopol. The Russians lost battles at Alma in September 1854 followed by lost battles at Balaklava and Inkerman. After the prolonged Siege of Sevastopol (1854–55) the base fell, exposing Russia’s inability to defend a major fortification on its own soil. On the death of Nicholas I, Alexander II became Tsar. On January 15, 1856, the new tsar took Russia out of the war on very unfavorable terms which included the loss of a naval fleet on the Black Sea. Since playing a major role in the defeat of Napoleon, Russia was regarded as militarily invincible, but once opposed against a coalition of the great powers of Europe, the reverses it suffered on land and sea exposed the decay and weakness of Tsar Nicholas’ regime. Russia now faced the choice of initiating major reforms or losing its status as a major European power. 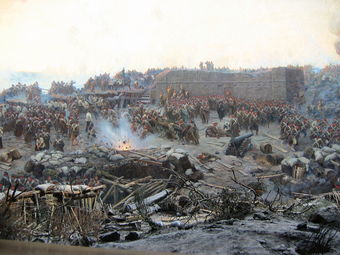