The Westerners and the Slavophiles

24.3.5: The Westerners and the Slavophiles

During the second half of the 19th century, a group of “Slavophiles” emerged in intellectual circles. They opposed the modernization and westernization begun by Peter the Great and Catherine the Great and advocated for a return to a simple peasant-based society centered on the Orthodox faith.

Pochvennichestvo
A late 19th-century Russian movement tied closely with its contemporary ideology, the Slavophile movement, whose primary focus was to change Russian society by the humbling of the self and social reform through the Russian Orthodox Church rather than the radical implementations of the intelligentsia.
enlightened despot
A form of absolute monarchy or despotism inspired by the Enlightenment, that embraced rationality, fostered education, and allowed religious tolerance, freedom of speech, and the right to hold private property.
Slavophiles
An intellectual movement originating in the 19th century that wanted the Russian Empire to be developed upon values and institutions derived from its early history, opposing the influences of Western Europe in Russia.

During the second half of the 19th century, a faction of so-called “Slavophiles” emerged in intellectual circles. They were convinced that Peter the Great made a mistake in trying to modernize and Westernize the country and that Russia’s salvation lay in the rejection of Western ideas. Slavophiles believed that while the West polluted itself with science, atheism, materialism, and wealth, they should return to a simple peasant-based society centered on the Orthodox faith. The government rejected these ideas in favor of rapid modernization.

The Westernization of Russia

Peter the Great, the Tsar of Russia from 1672-1725, started a cultural revolution in Russia that replaced some of the traditionalist and medieval social and political systems with those that were modern, scientific, westernized, and based on the Enlightenment. Peter’s reforms made a lasting impact on Russia and many institutions of Russian government trace their origins to his reign.

Peter implemented sweeping reforms aimed at modernization. Heavily influenced by his advisers from Western Europe, Peter reorganized the Russian army along modern lines and dreamed of making the country a maritime power. He faced much opposition to these policies at home, but brutally suppressed any and all rebellions against his authority: Streltsy, Bashkirs, Astrakhan, and the greatest civil uprising of his reign, the Bulavin Rebellion.

Peter implemented absolute social modernization by introducing French and western dress to his court and requiring courtiers, state officials, and the military to shave their beards and adopt modern clothing styles. One means of achieving this end was the introduction of taxes for long beards and robes in September 1698. Peter also taxed many Russian cultural customs such as traditional bathing, fishing, and beekeeping.

Catherine the Great, the most renowned and the longest-ruling female leader of Russia from 1762 until her death in 1796, revitalized Russia under her reign, allowing it to grow larger and stronger than ever and become recognized as one of the great powers of Europe. An admirer of Peter the Great, Catherine continued to modernize Russia along Western European lines. She enthusiastically supported the ideals of The Enlightenment, thus earning the status of an enlightened despot. Catherine held western European philosophies and culture, especially from the French Enlightenment, close to her heart, and she wanted to surround herself with like-minded people within Russia. She believed a “new kind of person” could be created by inculcating Russian children with European education. This meant developing individuals both intellectually and morally, providing them knowledge and skills, and fostering a sense of civic responsibility.

“Westernization” carries different meanings in different countries at different times. In reference to 18th century Russia, it meant legislative changes to economics, politics, and culture. It also entailed the Russian gentry’s adherence to a set standard and its imitation of the Western values. Westernization in Russia included the modernization of machinery, the refinement of a more efficient bureaucracy, and the acceptance of Western European tastes.

Peter and Catherine’s reforms set the tone for Russian domestic policies for centuries to come. His legacy could be seen into the 19th century and beyond. Westernizers were a group of 19th century intellectuals who believed that Russia’s development depended upon the adoption of Western European technology and liberal government. In their view, western ideas such as industrialization needed to be implemented throughout Russia to make it a more successful country. 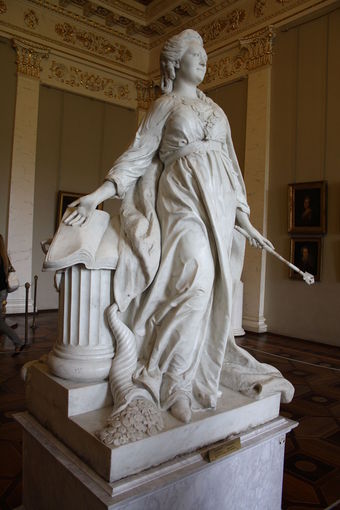 Catherine the Great Marble statue of Catherine II in the guise of Minerva (1789–1790), by Fedot Shubin. The style exemplifies Catherine’s love for Western philosophy and culture, Minerva being the Roman goddess of wisdom.

Slavophilia was an intellectual movement originating in the 19th century that wanted the Russian Empire to be developed upon values and institutions derived from its early history. Slavophiles opposed the influences of Western Europe in Russia. There were similar movements in Poland, Hungary, and Greece. Depending on the historical context, its opposite could be termed Slavophobia, a fear of Slavic culture, or even what some Russian intellectuals called Westernism, begun by Peter the Great’s efforts in the late 17th and early 18th centuries.

Slavophonism developed into many branches of the same movement. Some were leftist and noted that progressive ideas such as democracy were intrinsic to the Russian experience, as proved by what they considered to be the rough democracy of medieval Novgorod. Some were rightist and pointed to the centuries-old tradition of the autocratic tsar as the essence of the Russian nature.

The Slavophiles were determined to protect what they believed were unique Russian traditions and culture. In doing so, they rejected individualism. The role of the Orthodox Church was seen as more significant than the role of the state. Socialism was opposed by Slavophiles as an alien thought, and Russian mysticism was preferred over “Western rationalism.” Rural life was praised by the movement, which opposed industrialization and urban development, and protection of the “mir” (peasant village communities) was an important measure to prevent the growth of the working class.

The movement originated in Moscow in the 1830s. Drawing on the works of Greek Church Fathers, the poet Aleksey Khomyakov (1804–60) and his devoutly Orthodox colleagues elaborated a traditionalistic doctrine that claimed Russia has its own distinct way that should avoid imitating “Western” institutions. The Russian Slavophiles criticized the modernization of Peter the Great and Catherine the Great, and some of even adopted traditional pre-Petrine dress.

Pochvennichestvo (roughly “return to the soil”) was a late 19th-century Russian movement tied closely with its contemporary ideology, the Slavophile movement. Both were for the complete emancipation of serfdom, stressed a strong desire to return to the idealized past of Russia’s history, and opposed Europeanization. The movement also chose a complete rejection of the nihilist, classical liberal, and Marxist movements of the time. Their primary focus was to change Russian society by the humbling of the self and social reform through the Russian Orthodox Church rather than the radical implementations of the intelligentsia.

The major differences between the Slavophiles and the movement were that the former detested the Westernization policies of Peter the Great, but the latter praised what were seen as the benefits of the notorious ruler but maintained a strong patriotic mentality for the Orthodoxy, Autocracy, and Nationality. Another major difference was that many of the movement’s leaders and supporters adopted a militantly anti-Protestant, anti-Catholic, and anti-Semitic stance.

The concept had its roots in the works of the German philosopher Johann Gottfried Herder, who focused primarily on emphasizing the differences among people and regional cultures. In addition, it rejected the universalism of the Enlightenment period. The most prominent Russian intellectuals who founded the ideology were Nikolay Strakhov, Nikolay Danilevsky, and Konstantin Leontyev.