The 1861 Emancipation of the Serfs

In 1861 Alexander II freed all serfs (over 23 million people) in a major agrarian reform, stimulated in part by his view that “it is better to liberate the peasants from above” than to wait until they won their freedom by uprisings “from below.”

Determine the effectiveness of the 1861 emancipation of the serfs

1848 revolutions
A series of political upheavals throughout Europe in 1848 that remains the most widespread revolutionary wave in European history. The revolutions were essentially democratic in nature, with the aim of removing the old feudal structures and creating independent national states. The revolutionary wave began in France in February and immediately spread to most of Europe and parts of Latin America. Over 50 countries were affected, but with no coordination or cooperation between their respective revolutionaries.
mir
Peasant village communities, as opposed to individual farmsteads or khutors, in Imperial Russia. The vast majority of Russian peasants held their land in communal ownership within a community, which acted as a village government and a cooperative. Arable land was divided in sections based on soil quality and distance from the village. Each household had the right to claim one or more strips from each section depending on the number of adults in the household.
Alexander II
The Tsar of Russia from March 2, 1855, until his assassination in 1881. He was also the King of Poland and the Grand Duke of Finland. His most significant reform as emperor was emancipation of Russia’s serfs in 1861, for which he is known as Alexander the Liberator.

The Emancipation Reform of 1861 in Russia was the first and most important of liberal reforms effected during the reign (1855-1881) of Tsar Alexander II of Russia. The reform effectively abolished serfdom throughout the Russian Empire.

The 1861 Emancipation Manifesto proclaimed the emancipation of the serfs on private estates and of the domestic (household) serfs. By this edict more than 23 million people received their liberty. Serfs gained the full rights of free citizens, including rights to marry without having to gain consent, to own property, and to own a business. The Manifesto prescribed that peasants would be able to buy the land from the landlords. Household serfs were the least affected, gaining only their freedom and no land.

The liberal politicians who stood behind the 1861 manifesto recognized that their country was one of a few remaining feudal states in Europe. The pitiful display by Russian forces in the Crimean War left the government acutely aware of the empire’s backwardness. Eager to grow and develop industrial and therefore military and political strength, they introduced a number of economic reforms, including the end of serfdom. It was optimistically hoped that after the abolition the mir (peasant village communities) would dissolve into individual peasant land owners and the beginnings of a market economy.

The main issue was whether the serfs should remain dependent on the landlords or be transformed into a class of independent communal proprietors. The land owners initially pushed for granting the peasants freedom but not land. The tsar and his advisers, mindful of 1848 revolutions in Western Europe, were opposed to creating a proletariat and the instability this could bring. But giving the peasants freedom and land left existing land owners without the large and cheap labor force they needed to maintain their estates and lifestyles. By 1859, however, a third of their estates and two -thirds of their serfs were mortgaged to the state or noble banks, so they had no choice but to accept the emancipation.

To balance this, the legislation contained three measures to reduce the potential economic self-sufficiency of the peasants. First, a transition period of two years was introduced, during which the peasant was obligated as before to the land owner. Second, large parts of common land were passed to the major land owners as otrezki (“cut off lands”), making many forests, roads, and rivers accessible only for a fee. The serfs also had to pay the land owner for their allocation of land in a series of redemption payments, which in turn were used to compensate the land owners with bonds. Three-quarters of the total sum would be advanced by the government to the land owner and then the peasants would repay the money plus interest to the government over 49 years. These redemption payments were finally canceled in 1907. 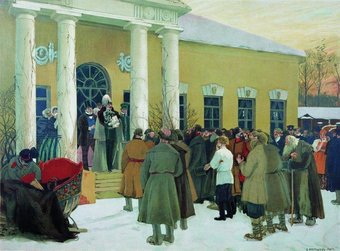 Emancipation Reform of 1861 A 1907 painting by Boris Kustodiev depicting Russian serfs listening to the proclamation of the Emancipation Manifesto in 1861.

Although the emancipation reform was commemorated by the construction of the enormous Alexander Nevsky Cathedral in Moscow and history books give Alexander II the name of “Alexander the Liberator,” its results were far from ideal. Household serfs were the worst affected as they gained only their freedom and no land. Many of the more enlightened bureaucrats had an understanding that the freeing of the serfs would bring about drastic changes in both Russian society and government. However, their idea that these changes would affect only the “lower stories” of society and strengthen the autocracy, rather than weaken it was wrong. In reality, the reforms created a new system in which the monarch had to coexist with an independent court, free press, and local governments that operated differently and more freely than in the past.

More specifically, in regards to new localized government, the reforms put in place a system where the land owners had more of a say within their newly formed “provinces.” While this was not the direct intent of the reforms, it was evident that it significantly weakened the idea of the autocracy. Now, the “well-to-do” serfs, along with previously free peoples, were able to purchase land as private property. While early in the reforms the creation of local government changed few things about Russian society, the rise in capitalism drastically affected not only the social structure of Russia, but the behaviors and activities of the self-government institutions.

The serfs from private estates were given less land than they needed to survive, which led to civil unrest. The redemption tax was so high that the serfs had to sell all the grain they produced to pay the tax, which left nothing for their survival. Land owners also suffered because many of them were deeply in debt, and the forced selling of their land left them struggling to maintain their lavish lifestyles. In many cases, the newly freed serfs were forced to “rent” their land from wealthy landowners. Furthermore, when the peasants had to work for the same landowners to pay their “labor payments,” their own fields were often neglected. Over the next few years, the yields from the peasants’ crops remained low, and soon famine struck a large portion of Russia. With little food and in a similar condition as when they were serfs, many peasants started to voice their disdain for the social system.

Lastly, the reforms transformed the Russian economy. The individuals who led the reform were in favor of an economic system similar to that of other European countries, which promoted the ideas of capitalism and free trade. The idea of the reformers was to promote development and encourage private property ownership, free competition, entrepreneurship, and hired labor. They hoped this would bring about an a more laissez-faire economic system with minimal regulations and tariffs. Soon after the reforms, there was a substantial rise in the amount of grain production for sale.