NATO and the Warsaw Pact

Britain, France, the United States, Canada, and eight other western European countries established the North Atlantic Treaty Organization (NATO) in 1949. In 1955, the Soviet Union responded by created the Warsaw Pact.

Compare the two networks established by NATO and the Warsaw Pact

North Atlantic Treaty
A mutual defense treaty signed in Washington on April 4, 1949 that established NATO.
1948 Czechoslovak coup d’état
An event in February 1948 in which the Communist Party of Czechoslovakia, with Soviet backing, assumed undisputed control over the government of Czechoslovakia, marking the onset of four decades of Communist dictatorship in the country.
Treaty of Brussels
A treaty signed on March 17, 1948, between Belgium, France, Luxembourg, the Netherlands, and the United Kingdom as an expansion to the preceding year’s defense pledge, the Dunkirk Treaty signed between Britain and France; a mutual defense treaty.

NATO was little more than a political association until the Korean War galvanized the organization’s member states and an integrated military structure was built up under the direction of two U.S. supreme commanders. The course of the Cold War led to a rivalry with nations of the Warsaw Pact, which formed in 1955. Doubts over the strength of the relationship between the European states and the United States ebbed and flowed, along with doubts over the credibility of the NATO defense against a prospective Soviet invasion—doubts that led to the development of the independent French nuclear deterrent and the withdrawal of France from NATO’s military structure in 1966 for 30 years.

The Treaty of Brussels, signed on March 17, 1948 by Belgium, the Netherlands, Luxembourg, France, and the United Kingdom, is considered the precursor to the NATO agreement. The treaty and the Soviet Berlin Blockade led to the creation of the Western European Union’s Defense Organization in September 1948. However, participation of the United States was thought necessary both to counter the military power of the USSR and prevent the revival of nationalist militarism. In addition, the 1948 Czechoslovak coup d’état by the Communists had overthrown a democratic government and British Foreign Minister Ernest Bevin reiterated that the best way to prevent another Czechoslovakia was to evolve a joint Western military strategy.

In 1948, European leaders met with U.S. defense, military, and diplomatic officials at the Pentagon under U.S. Secretary of State George C. Marshall’s orders, exploring a framework for a new and unprecedented association. Talks for a new military alliance resulted in the North Atlantic Treaty, signed in Washington, D.C. on April 4, 1949. It included the five Treaty of Brussels states plus the United States, Canada, Portugal, Italy, Norway, Denmark, and Iceland. The first NATO Secretary General, Lord Ismay, stated in 1949 that the organization’s goal was “to keep the Russians out, the Americans in, and the Germans down.”

The members agreed that an armed attack against any one of them in Europe or North America would be considered an attack against them all. Consequently, they agreed that if an armed attack occurred, each of them, in exercise of the right of individual or collective self-defense, would assist the member being attacked, taking such action as it deemed necessary including the use of armed force, to restore and maintain the security of the North Atlantic area. The treaty does not require members to respond with military action against an aggressor. Although obliged to respond, they maintain the freedom to choose the method by which they do so.

The outbreak of the Korean War in June 1950 was crucial for NATO as it raised the apparent threat of all Communist countries working together and forced the alliance to develop concrete military plans. Supreme Headquarters Allied Powers Europe (SHAPE) was formed to direct forces in Europe and began work under Supreme Allied Commander Dwight D. Eisenhower in January 1951. In September 1950, the NATO Military Committee called for an ambitious buildup of conventional forces to meet the Soviets, subsequently reaffirming this position at the February 1952 meeting of the North Atlantic Council in Lisbon.

In 1954, the Soviet Union suggested that it should join NATO to preserve peace in Europe. The NATO countries, fearing that the Soviet Union’s motive was to weaken the alliance, ultimately rejected this proposal.

The incorporation of West Germany into the organization on May 9, 1955 was described as “a decisive turning point in the history of our continent” by Halvard Lange, Foreign Affairs Minister of Norway at the time. A major reason for Germany’s entry into the alliance was that without German manpower, it would have been impossible to field enough conventional forces to resist a Soviet invasion. One of its immediate results was the creation of the Warsaw Pact, signed on May 14, 1955 by the Soviet Union, Hungary, Czechoslovakia, Poland, Bulgaria, Romania, Albania, and East Germany as a formal response to this event, thereby delineating the two opposing sides of the Cold War. 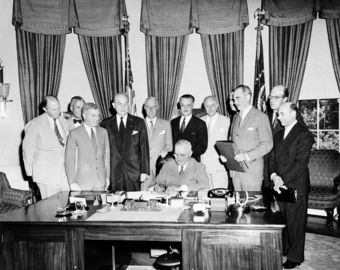 The Soviets wanted to keep their part of Europe and not let the Americans take it from them. Ideologically, the Soviet Union arrogated the right to define socialism and communism and act as the leader of the global socialist movement. A corollary to this idea was the necessity of intervention if a country appeared to be violating core socialist ideas and Communist Party functions, which was explicitly stated in the Brezhnev Doctrine. Geostrategic principles also drove the Soviet Union to prevent invasion of its territory by Western European powers.

The eight member countries of the Warsaw Pact pledged the mutual defense of any member who was attacked. Relations among the treaty signatories were based upon mutual non-intervention in the internal affairs of the member countries, respect for national sovereignty, and political independence. However, almost all governments of those member states were indirectly controlled by the Soviet Union.

While the Warsaw Pact was established as a balance of power or counterweight to NATO, there was no direct confrontation between them. Instead, the conflict was fought on an ideological basis. Both NATO and the Warsaw Pact led to the expansion of military forces and their integration into the respective blocs. Its largest military engagement was the Warsaw Pact invasion of Czechoslovakia (with the participation of all Pact nations except Romania).