In June 1948, Stalin instituted the Berlin Blockade, one of the first major crises of the Cold War, preventing food, materials, and supplies from arriving in West Berlin. The United States and several other countries responded with the massive “Berlin airlift,” supplying West Berlin with food and other provisions.

Review the reasons for the Berlin Blockade

Berlin airlift
In response to the Berlin Blockade, the Western Allies organized this project to carry supplies to the people of West Berlin by air.
Potsdam Agreement
The 1945 agreement between three of the Allies of World War II, United Kingdom, United States, and USSR, for the military occupation and reconstruction of Germany. It included Germany’s demilitarization, reparations, and the prosecution of war criminals.

The Berlin Blockade (June 24, 1948 – May 12, 1949) was one of the first major international crises of the Cold War. During the multinational occupation of post–World War II Germany, the Soviet Union blocked the Western Allies’ railway, road, and canal access to the sectors of Berlin under Western control. The Soviets offered to drop the blockade if the Western Allies withdrew the newly introduced Deutsche mark from West Berlin.

By the spring of 1949, the airlift was clearly succeeding, and by April it was delivering more cargo than was previously transported into the city by rail. On May 12, 1949, the USSR lifted the blockade of West Berlin. The Berlin Blockade highlighted the competing ideological and economic visions for postwar Europe.

From July 17 to August 2, 1945, the victorious Allied Powers reached the Potsdam Agreement on the fate of postwar Europe, calling for the division of defeated Germany into four temporary occupation zones (thus reaffirming principles laid out earlier by the Yalta Conference). These zones were located roughly around the then-current locations of the Allied armies. Also divided into occupation zones, Berlin was located 100 miles inside Soviet-controlled eastern Germany. The United States, United Kingdom, and France controlled western portions of the city, while Soviet troops controlled the eastern sector.

In a June 1945 meeting, Stalin informed German communist leaders that he expected to slowly undermine the British position within their occupation zone, that the United States would withdraw within a year or two, and that nothing would then stand in the way of a united Germany under communist control within the Soviet orbit. Stalin and other leaders told visiting Bulgarian and Yugoslavian delegations in early 1946 that Germany must be both Soviet and communist.

Creation of an economically stable western Germany required reform of the unstable Reichsmark German currency introduced after the 1920s German inflation. The Soviets had debased the Reichsmark by excessive printing, resulting in Germans using cigarettes as a de facto currency or for bartering. The Soviets opposed western plans for a reform. They interpreted this new currency as an unjustified, unilateral decision.

On June 18, the United States, Britain, and France announced that on June 21 the Deutsche Mark would be introduced, but the Soviets refused to permit its use as legal tender in Berlin. The Allies had already transported 2.5 million Deutsche Marks into the city and it quickly became the standard currency in all four sectors. Against the wishes of the Soviets, the new currency, along with the Marshall Plan that backed it, appeared to have the potential to revitalize Germany. Stalin looked to force the Western nations to abandon Berlin.

The day after the June 18, 1948 announcement of the new Deutsche Mark, Soviet guards halted all passenger trains and traffic on the autobahn to Berlin, delayed Western and German freight shipments, and required that all water transport secure special Soviet permission. On June 21, the day the Deutsche Mark was introduced, the Soviet military halted a United States military supply train to Berlin and sent it back to western Germany. On June 22, the Soviets announced that they would introduce a new currency in their zone.

On June 24, the Soviets severed land and water connections between the non-Soviet zones and Berlin. That same day, they halted all rail and barge traffic in and out of Berlin. On June 25, the Soviets stopped supplying food to the civilian population in the non-Soviet sectors of Berlin. Motor traffic from Berlin to the western zones was permitted, but this required a 14.3-mile detour to a ferry crossing because of alleged “repairs” to a bridge. They also cut off Berlin’s electricity using their control over the generating plants in the Soviet zone.

At the time, West Berlin had 36 days’ worth of food, and 45 days’ worth of coal. Militarily, the Americans and British were greatly outnumbered because of the postwar reduction in their armies. The United States, like other western countries, had disbanded most of its troops and was largely inferior in the European theater. The entire United States Army was reduced to 552,000 men by February 1948. Military forces in the western sectors of Berlin numbered only 8,973 Americans, 7,606 British, and 6,100 French. Soviet military forces in the Soviet sector that surrounded Berlin totaled 1.5 million. The two United States regiments in Berlin could have provided little resistance against a Soviet attack. Believing that Britain, France, and the United States had little option than to acquiesce, the Soviet Military Administration in Germany celebrated the beginning of the blockade.

Although the ground routes were never negotiated, the same was not true of the air. On November 30, 1945, it was agreed in writing that there would be three 20-mile-wide air corridors providing free access to Berlin. Additionally, unlike a force of tanks and trucks, the Soviets could not claim that cargo aircraft were some sort of military threat. In the face of unarmed aircraft refusing to turn around, the only way to enforce the blockade would have been to shoot them down. An airlift would force the Soviet Union to either shoot down unarmed humanitarian aircraft, thus breaking their own agreements, or back down.

Enforcing this would require an airlift that really worked. If the supplies could not be flown in fast enough, Soviet help would eventually be needed to prevent starvation. The American military government, based on a minimum daily ration of 1,990 calories, set a total of daily supplies at 646 tons of flour and wheat, 125 tons of cereal, 64 tons of fat, 109 tons of meat and fish, 180 tons of dehydrated potatoes, 180 tons of sugar, 11 tons of coffee, 19 tons of powdered milk, 5 tons of whole milk for children, 3 tons of fresh yeast for baking, 144 tons of dehydrated vegetables, 38 tons of salt, and 10 tons of cheese. In all, 1,534 tons were required each day to sustain the more than two million people of Berlin. Additionally, for heat and power, 3,475 tons of coal and gasoline were also required daily.

During the first week, the airlift averaged only ninety tons a day, but by the second week it reached 1,000 tons. This likely would have sufficed had the effort lasted only a few weeks as originally believed. The Communist press in East Berlin ridiculed the project. It derisively referred to “the futile attempts of the Americans to save face and to maintain their untenable position in Berlin.”

But by the end of August, after two months, the Airlift was succeeding; daily operations flew more than 1,500 flights a day and delivered more than 4,500 tons of cargo, enough to keep West Berlin supplied.

As the tempo of the Airlift grew, it became apparent that the Western powers might be able to pull off the impossible: indefinitely supplying an entire city by air alone. In response, starting on August 1, the Soviets offered free food to anyone who crossed into East Berlin and registered their ration cards there, but West Berliners overwhelmingly rejected Soviet offers of food.

The Soviets had an advantage in conventional military forces, but were preoccupied with rebuilding their war-torn economy and society. The U.S. had a stronger navy and air force as well as nuclear weapons. Neither side wanted a war; the Soviets did not disrupt the airlift. 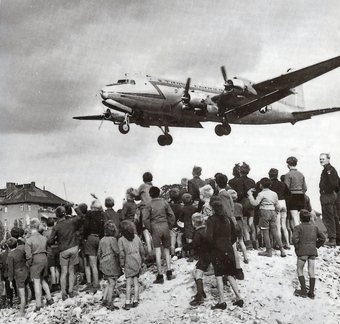 End of the Blockade

On April 15, 1949 the Russian news agency TASS reported a willingness by the Soviets to lift the blockade. The next day the U.S. State Department stated the “way appears clear” for the blockade to end. Soon afterwards, the four powers began serious negotiations, and a settlement was reached on Western terms. On May 4, 1949, the Allies announced an agreement to end the blockade in eight days’ time.

Berlin Airlift Monument in Berlin-Tempelhof displays the names of the 39 British and 31 American airmen who lost their lives during the operation. Similar monuments can be found at the military airfield of Wietzenbruch near the former RAF Celle and at Rhein-Main Air Base.

The Soviet blockade of Berlin was lifted at one minute after midnight on May 12,, 1949. A British convoy immediately drove through to Berlin, and the first train from West Germany reached Berlin at 5:32 a.m. Later that day an enormous crowd celebrated the end of the blockade. General Clay, whose retirement had been announced by US President Truman on May 3, was saluted by 11,000 US soldiers and dozens of aircraft. Once home, Clay received a ticker-tape parade in New York City, was invited to address the US Congress, and was honored with a medal from President Truman.