OPEC, whose members are largely from the Middle East, is an oil cartel created in 1960 to counterbalance the political and economic power of the mostly U.S.-based multinational oil companies known as the “Seven Sisters.”

Explain what OPEC is and why it exists

Iranian Revolution
The overthrow of the Pahlavi dynasty under Mohammad Reza Shah Pahlavi, who was supported by the United States, and its eventual replacement with an Islamic republic under the Grand Ayatollah Ruhollah Khomeini, the leader of the revolution. This was supported by various leftist and Islamist organizations and Iranian student movements.
Yom Kippur War
A war fought by a coalition of Arab states led by Egypt and Syria against Israel from October 6 to 25, 1973. The fighting mostly took place in the Sinai and the Golan Heights, territories occupied by Israel since the Six-Day War of 1967.
cartel
An agreement between competing firms to control prices or exclude entry of a new competitor in a market. It is a formal organization of sellers or buyers that agree to fix selling prices, purchase prices, or reduce production using a variety of tactics.

Organization of the Petroleum Exporting Countries (OPEC) is an intergovernmental organization of 13 nations, founded in 1960 in Baghdad by the first five members (Iran, Iraq, Kuwait, Saudi Arabia, Venezuela), and headquartered since 1965 in Vienna. As of 2015, the 13 countries accounted for an estimated 42 percent of global oil production and 73 percent of the world’s “proven” oil reserves, giving OPEC a major influence on global oil prices that were previously determined by American-dominated multinational oil companies.

OPEC’s stated mission is “to coordinate and unify the petroleum policies of its member countries and ensure the stabilization of oil markets, in order to secure an efficient, economic, and regular supply of petroleum to consumers, a steady income to producers, and a fair return on capital for those investing in the petroleum industry.” The organization is also a significant provider of information about the international oil market. As of December 2016, OPEC’s members are Algeria, Angola, Ecuador, Gabon, Iran, Iraq, Kuwait, Libya, Nigeria, Qatar, Saudi Arabia (the de facto leader), United Arab Emirates, and Venezuela. Two-thirds of OPEC’s oil production and reserves are in its six Middle Eastern countries that surround the oil-rich Persian Gulf.

The formation of OPEC marked a turning point toward national sovereignty over natural resources, and OPEC decisions have come to play a prominent role in the global oil market and international relations. The effect is particularly strong when wars or civil disorders lead to extended interruptions in supply. In the 1970s, restrictions in oil production led to a dramatic rise in oil prices and OPEC’s revenue and wealth, with long-lasting and far-reaching consequences for the global economy. In the 1980s, OPEC started setting production targets for its member nations; when the production targets are reduced, oil prices increase, most recently from the organization’s 2008 and 2016 decisions to trim oversupply.

Economists often cite OPEC as a textbook example of a cartel that cooperates to reduce market competition, but whose consultations are protected by the doctrine of sovereign immunity under international law. In December 2014, “OPEC and the oil men” ranked as #3 on Lloyd’s list of “the top 100 most influential people in the shipping industry.” However, their influence on international trade is periodically challenged by the expansion of non-OPEC energy sources, and by the recurring temptation for individual OPEC countries to exceed production ceilings and pursue conflicting self-interests.

In 1949, Venezuela and Iran took the earliest steps in the direction of OPEC by inviting Iraq, Kuwait, and Saudi Arabia to improve communication among petroleum-exporting nations as the world recovered from World War II. At the time, some of the world’s largest oil fields were just entering production in the Middle East. The United States had established the Interstate Oil Compact Commission to join the Texas Railroad Commission in limiting overproduction. The US was simultaneously the world’s largest producer and consumer of oil, and the world market was dominated by a group of multinational companies known as the “Seven Sisters,” five of which were headquartered in the U.S. Oil-exporting countries were motivated to form OPEC as a counterweight to this concentration of political and economic power.

In February 1959, the multinational oil companies (MOCs) unilaterally reduced their posted prices for Venezuelan and Middle Eastern crude oil by 10 percent. In September 1960, the Baghdad Conference was held at the initiative of Tariki, Pérez Alfonzo, and Iraqi prime minister Abd al-Karim Qasim. Government representatives from Iran, Iraq, Kuwait, Saudi Arabia, and Venezuela met in Baghdad to discuss ways to increase the price of crude oil produced by their countries and respond to unilateral actions by the MOCs. Despite strong U.S. opposition, according to historian Nathan Citiano, “[t]ogether with Arab and non-Arab producers, Saudi Arabia formed the Organization of Petroleum Export Countries (OPEC) to secure the best price available from the major oil corporations.”

In October 1973, the Organization of Arab Petroleum Exporting Countries (OAPEC, consisting of the Arab majority of OPEC plus Egypt and Syria) declared significant production cuts and an oil embargo against the United States and other industrialized nations that supported Israel in the Yom Kippur War, an event known as the 1973 oil crisis. A previous embargo attempt was largely ineffective in response to the Six-Day War in 1967. However, in 1973, the result was a sharp rise in oil prices and OPEC revenues, from US$3/barrel to US$12/barrel, and an emergency period of energy rationing, intensified by panic reactions, declining U.S. oil production, currency devaluations, and a lengthy UK coal-miners dispute.

For a time, the UK imposed an emergency three-day workweek. Seven European nations banned non-essential Sunday driving. U.S. gas stations limited the amount of gasoline that could be dispensed, closed on Sundays, and restricted the days when gasoline could be purchased based on license plate numbers. Even after the embargo ended in March 1974 following intense diplomatic activity, prices continued to rise. The world experienced a global economic recession, with unemployment and inflation surging simultaneously, steep declines in stock and bond prices, major shifts in trade balances and petrodollar flows, and a dramatic end to the post-WWII economic boom. 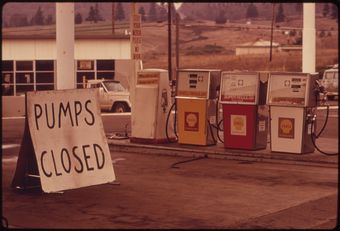 1973 Oil Crisis: An undersupplied U.S. gasoline station, closed during the oil embargo in 1973

The 1973–1974 oil embargo had lasting effects on the United States and other industrialized nations, which established the International Energy Agency in response. Oil conservation efforts included lower speed limits on highways, smaller and more energy-efficient cars and appliances, year-round daylight saving time, reduced usage of heating and air-conditioning, better insulation, increased support of mass transit, national emergency stockpiles, and greater emphasis on coal, natural gas, ethanol, nuclear, and other alternative energy sources. These long-term efforts became effective enough that U.S. oil consumption would rise only 11 percent during 1980–2014, while real GDP rose 150 percent. But in the 1970s, OPEC nations demonstrated convincingly that their oil could be used as both a political and economic weapon against other nations, at least in the short term.

The 1979 oil crisis occurred in the United States due to decreased oil output in the wake of the Iranian Revolution. Despite the fact that global oil supply decreased by only ~4%, widespread panic resulted, driving the price far higher than justified by supply. The price of crude oil more than doubled to $39.50 per barrel over the next 12 months, and long lines once again appeared at gas stations as they had in the 1973 oil crisis.

In 1980, following the outbreak of the Iran–Iraq War, oil production in Iran nearly stopped, and Iraq’s oil production was severely cut as well. Economic recessions were triggered in the U.S. and other countries. Oil prices did not subside to pre-crisis levels until the mid-1980s.

After 1980, oil prices began a 20-year decline, eventually reaching 60 percent fall-off during the 1990s. As with the 1973 crisis, global politics and power balance were impacted. Oil exporters such as Mexico, Nigeria, and Venezuela expanded production; the USSR became the top world producer; North Sea and Alaskan oil flooded the market; and OPEC lost influence.