In June 1941, the German army launched an invasion of the Soviet Union, opening the largest land theater of war in history and trapping most of the Axis’ military forces in a war of attrition.

Einsatzgruppen
Paramilitary death squads of Nazi Germany that were responsible for mass killings, primarily by shooting, during World War II.
Weltanschauungen
A particular philosophy or view of life; the worldview of an individual or group.
Mein Kampf
An autobiography by the National Socialist leader Adolf Hitler, in which he outlines his political ideology and future plans for Germany; German for “my struggle.”

Operation Barbarossa was the code name for Nazi Germany’s World War II invasion of the Soviet Union, which began on June 22, 1941. The operation was driven by Adolf Hitler’s ideological desire to destroy the Soviet Union as outlined in his 1925 manifesto Mein Kampf.

Setting the Stage for the Invasion

In the two years leading up to the invasion, the two countries signed political and economic pacts for strategic purposes. Nevertheless, on December 18, 1940, Hitler authorized an invasion of the Soviet Union with a planned start date of May 15, 1941. The actual invasion began on June 22, 1941. Over the course of the operation, about four million Axis soldiers invaded the Soviet Union along a 1,800-mile front, the largest invasion force in the history of warfare. In addition to troops, the Germans employed some 600,000 motor vehicles and between 600,000 and 700,000 horses. It transformed the perception of the Soviet Union from aggressor to victim and marked the beginning of the rapid escalation of the war, both geographically and in the formation of the Allied coalition.

The Germans won resounding victories and occupied some of the most important economic areas of the Soviet Union, mainly in Ukraine, both inflicting and sustaining heavy casualties. Despite their successes, the German offensive stalled on the outskirts of Moscow and was subsequently pushed back by a Soviet counteroffensive. The Red Army repelled the Wehrmacht’s strongest blows and forced the unprepared Germany into a war of attrition. The Germans would never again mount a simultaneous offensive along the entire strategic Soviet-Axis front. The failure of the operation drove Hitler to demand further operations inside the USSR of increasingly limited scope that eventually failed, such as Case Blue and Operation Citadel.

The failure of Operation Barbarossa was a turning point in the fortunes of the Third Reich. Most importantly, the operation opened up the Eastern Front, to which more forces were committed than in any other theater of war in world history. The Eastern Front became the site of some of the largest battles, most horrific atrocities, and highest casualties for Soviets and Germans alike, all of which influenced the course of both World War II and the subsequent history of the 20th century. The German forces captured millions of Soviet prisoners of war who were not granted protections stipulated in the Geneva Conventions. A majority m never returned alive; Germany deliberately starved the prisoners to death as part of a “Hunger Plan” that aimed to reduce the population of Eastern Europe and then re-populate it with ethnic Germans. Over a million Soviet Jews were murdered by Einsatzgruppen death squads and gassing as part of the Holocaust.

As early as 1925, Adolf Hitler vaguely declared in his political manifesto and autobiography Mein Kampf that he would invade the Soviet Union, asserting that the German people needed to secure Lebensraum (“living space”) to ensure the survival of Germany for generations to come. On February 10, 1939, Hitler told his army commanders that the next war would be “purely a war of Weltanschauungen…totally a people’s war, a racial war.” On November 23, once World War II already started, Hitler declared that “racial war has broken out and this war shall determine who shall govern Europe, and with it, the world.” The racial policy of Nazi Germany viewed the Soviet Union (and all of Eastern Europe) as populated by non-Aryan Untermenschen (“sub-humans”), ruled by “Jewish Bolshevik conspirators.” Hitler claimed in Mein Kampf that Germany’s destiny was to “turn to the East” as it did “six hundred years ago.” Accordingly, it was stated Nazi policy to kill, deport, or enslave the majority of Russian and other Slavic populations and repopulate the land with Germanic peoples, under the Generalplan Ost (“General Plan for the East”). The Germans’ belief in their ethnic superiority is discernible in official German records and by pseudoscientific articles in German periodicals at the time, which covered topics such as “how to deal with alien populations.”

Overview of the Battles

The initial momentum of the German ground and air attack completely destroyed the Soviet organizational command and control within the first few hours, paralyzing every level of command from the infantry platoon to the Soviet High Command in Moscow. Therefore, Moscow failed to grasp the magnitude of the catastrophe that confronted the Soviet forces in the border area. Marshal Semyon Timoshenko called for a general counteroffensive on the entire front “without any regards for borders” that both men hoped would sweep the enemy from Soviet territory. Timoshenko’s order was not based on a realistic appraisal of the military situation at hand and resulted in devastating casualties.

Four weeks into the campaign, the Germans realized they had grossly underestimated Soviet strength. The German troops used their initial supplies without attaining the expected strategic freedom of movement. Operations were slowed to allow for resupply and adapt strategy to the new situation. Hitler had lost faith in battles of encirclement as large numbers of Soviet soldiers had escaped the pincers. He now believed he could defeat the Soviets by economic damage, depriving them of the industrial capacity to continue the war. That meant seizing the industrial center of Kharkov, the Donbass, and the oil fields of the Caucasus in the south and the speedy capture of Leningrad, a major center of military production, in the north.

After a German victory in Kiev, the Red Army no longer outnumbered the Germans and no more trained reserves were available. To defend Moscow, Stalin could field 800,000 men in 83 divisions, but no more than 25 divisions were fully effective. Operation Typhoon, the drive to Moscow, began on October 2. The Germans initially won several important battles, and the German government now publicly predicted the imminent capture of Moscow and convinced foreign correspondents of a pending Soviet collapse. On December 2, the German army advanced to within 15 miles of Moscow and could see the spires of the Kremlin, but by then the first blizzards had already begun. A reconnaissance battalion also managed to reach the town of Khimki, about 5 miles away from the Soviet capital. It captured the bridge over the Moscow-Volga Canal as well as the railway station, which marked the farthest eastern advance of German forces. But in spite of the progress made, the Wehrmacht was not equipped for winter warfare, and the bitter cold caused severe problems for their guns and equipment. Further, weather conditions grounded the Luftwaffe from conducting large-scale operations. Newly created Soviet units near Moscow now numbered over 500,000 men, and on December 5, they launched a massive counterattack as part of the Battle of Moscow that pushed the Germans back over 200 miles. By late December 1941, the Germans had lost the Battle for Moscow, and the invasion had cost the German army over 830,000 casualties in killed, wounded, captured, or missing in action.

Operation Barbarossa was the largest military operation in human history—more men, tanks, guns, and aircraft were committed than had ever been deployed before in a single offensive. Seventy-five percent of the entire German military participated. The invasion opened up the Eastern Front of World War II, the largest theater of war during that conflict, which witnessed titanic clashes of unprecedented violence and destruction for four years that resulted in the deaths of more than 26 million people. More people died fighting on the Eastern Front than in all other fighting across the globe during World War II. Damage to both the economy and landscape was enormous for the Soviets as approximately 1,710 towns and 70,000 villages were completely annihilated.

More than just ushering in untold death and devastation, Operation Barbarossa and the subsequent German failure to achieve their objectives changed the political landscape of Europe, dividing it into eastern and western blocs. The gaping political vacuum left in the eastern half of the continent was filled by the USSR when Stalin secured his territorial prizes of 1939–40 and firmly placed his Red Army in Bulgaria, Romania, Hungary, Poland, Czechoslovakia, and the eastern half of Germany. As a consequence, eastern Europe became Communist in political disposition and western Europe fell under the democratic sway of the United States, a nation uncertain about its future policies in Europe. Instead of profiting the German people, Operation Barbarossa’s failure instigated untold suffering when an estimated 1.4 million ethnic Germans died as a result of their forced flight from the East to the West, whether during the German retreat or later following the surrender. 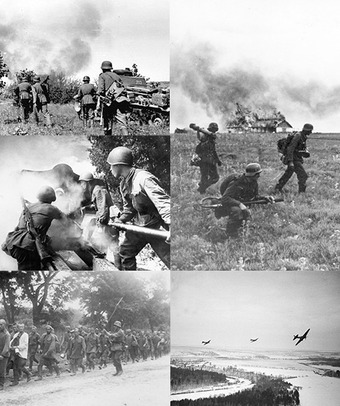