The German government led by Adolf Hitler and the Nazi Party was responsible for the Holocaust: the deliberate and systematic extermination of approximately six million Jews, 2.7 million ethnic Poles, and four million others who were deemed “unworthy of life.”

Nuremberg Laws
Antisemitic laws in Nazi Germany, which declared that only those of German or related blood were eligible to be Reich citizens; the remainder, mainly Jews, were classed as state subjects without citizenship rights.
Final Solution
The Nazi plan for the total extermination of the Jews during World War II, carried out in the period known as the Holocaust.
extermination camps
Camps designed and built by Nazi Germany during World War II to systematically kill millions of Jews, Slavs, and others considered “sub-human,” primarily by gassing but also in mass executions and through extreme work under starvation conditions.
genocide
The intentional action to destroy a people (usually defined as an ethnic, national, racial, or religious group) in whole or in part.

The Holocaust, also known as the Shoah (Hebrew for “the catastrophe”), was a genocide in which Adolf Hitler’s Nazi Germany and its collaborators killed approximately six million Jews. The victims included 1.5 million children and represented about two-thirds of the nine million Jews who resided in Europe. Some definitions of the Holocaust include the additional five million non-Jewish victims of Nazi mass murders, bringing the total to about 11 million. Killings took place throughout Nazi Germany, German-occupied territories, and territories held by allies of Nazi Germany.

The Plan for Genocide

From 1941 to 1945, Jews were systematically murdered in one of the deadliest genocides in history, part of a broader aggregate of acts of oppression and killings of various ethnic and political groups in Europe by the Nazi regime. Under the coordination of the SS and direction from the highest leadership of the Nazi Party, every arm of Germany’s bureaucracy was involved in the logistics and administration of the genocide. Other victims of Nazi crimes included ethnic Poles, Soviet citizens and Soviet POWs, other Slavs, Romanis, communists, homosexuals, Freemasons, Jehovah’s Witnesses, and the mentally and physically disabled. A network of about 42,500 facilities in Germany and German-occupied territories was used to concentrate victims for slave labor, mass murder, and other human rights abuses. Over 200,000 people were Holocaust perpetrators.

The persecution and genocide were carried out in stages, culminating in what Nazis termed the “Final Solution to the Jewish Question,” an agenda to exterminate Jews in Europe. Initially, the German government passed laws to exclude Jews from civil society, most prominently the Nuremberg Laws of 1935. Nazis established a network of concentration camps starting in 1933 and ghettos following the outbreak of World War II in 1939. In 1938, legal repression and resettlement turned to violence on Kristallnacht (“Night of Broken Glass”), when Jews were attacked and Jewish property was vandalized. Over 7,000 Jewish shops and more than 1,200 synagogues (roughly two-thirds of the synagogues in areas under German control) were damaged or destroyed. In 1941, as Germany conquered new territory in eastern Europe, specialized paramilitary units called Einsatzgruppen (“death squads”) murdered around two million Jews, partisans, and others, often in mass shootings. By the end of 1942, victims were regularly transported by freight trains to extermination camps where most who survived the journey were systematically killed in gas chambers. This continued until the end of World War II in Europe in April–May 1945.

Jewish armed resistance was limited. The most notable exception was the Warsaw Ghetto uprising of 1943, when thousands of poorly-armed Jewish fighters held the Waffen-SS at bay for four weeks. An estimated 20,000–30,000 Jewish partisans actively fought against the Nazis and their collaborators in Eastern Europe. French Jews took part in the French Resistance, which conducted a guerrilla campaign against the Nazis and Vichy French authorities. More than 100 armed Jewish uprisings took place. 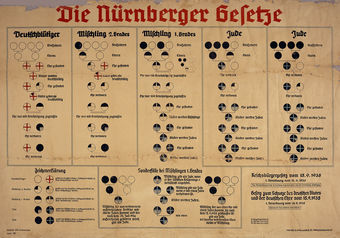 All branches of Germany’s bureaucracy were engaged in the logistics that led to the genocides, turning the Third Reich into what one Holocaust scholar, Michael Berenbaum, has called “a genocidal state”:

Every arm of the country’s sophisticated bureaucracy was involved in the killing process. Parish churches and the Interior Ministry supplied birth records showing who was Jewish; the Post Office delivered the deportation and denaturalization orders; the Finance Ministry confiscated Jewish property; German firms fired Jewish workers and disenfranchised Jewish stockholders.

Saul Friedländer writes that: “Not one social group, not one religious community, not one scholarly institution or professional association in Germany and throughout Europe declared its solidarity with the Jews.” He writes that some Christian churches declared that converted Jews should be regarded as part of the flock, but only up to a point. Friedländer argues that this makes the Holocaust distinctive because antisemitic policies were able to unfold without the interference of countervailing forces normally found in advanced societies, such as industry, small businesses, churches, trade unions, and other vested interests and lobby groups.

In many other genocides, pragmatic considerations such as control of territory and resources were central to the genocide policy. The Holocaust, however, was driven almost entirely by ideology. Israeli historian and scholar Yehuda Bauer argues:

The basic motivation [of the Holocaust] was purely ideological, rooted in an illusionary world of Nazi imagination, where an international Jewish conspiracy to control the world was opposed to a parallel Aryan quest. No genocide to date had been based so completely on myths, on hallucinations, on abstract, nonpragmatic ideology—which was then executed by very rational, pragmatic means.

The use of extermination camps (also called “death camps”) equipped with gas chambers for the systematic mass extermination of peoples was an unprecedented feature of the Holocaust. These were established at Auschwitz, Belzec, Chełmno, Jasenovac, Majdanek, Maly Trostenets, Sobibór, and Treblinka. They were built for the systematic killing of millions, primarily by gassing but also by execution and extreme work under starvation conditions. Stationary facilities built for the purpose of mass extermination resulted from earlier Nazi experimentation with poison gas during the secret Action T4 euthanasia program against mental patients.  Rudolf Höss, the longest-serving commandant of Auschwitz concentration camp, said:

Another improvement we made over Treblinka was that we built our gas chambers to accommodate 2,000 people at one time, whereas at Treblinka their 10 gas chambers only accommodated 200 people each. The way we selected our victims was as follows: we had two SS doctors on duty at Auschwitz to examine the incoming transports of prisoners. The prisoners would be marched by one of the doctors who would make spot decisions as they walked by. Those who were fit for work were sent into the Camp. Others were sent immediately to the extermination plants. Children of tender years were invariably exterminated, since by reason of their youth they were unable to work. Still another improvement we made over Treblinka was that at Treblinka the victims almost always knew that they were to be exterminated and at Auschwitz we endeavored to fool the victims into thinking that they were to go through a delousing process. Of course, frequently they realized our true intentions and we sometimes had riots and difficulties due to that fact. Very frequently women would hide their children under the clothes but of course when we found them we would send the children in to be exterminated. We were required to carry out these exterminations in secrecy but of course the foul and nauseating stench from the continuous burning of bodies permeated the entire area and all of the people living in the surrounding communities knew that exterminations were going on at Auschwitz. 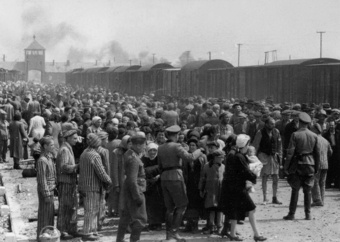 Auschwitz: Hungarian Jews being selected by Nazis to be sent to the gas chamber at Auschwitz concentration camp.