The attack on Pearl Harbor was a surprise military strike by the Imperial Japanese Navy against the United States naval base on the morning of December 7, 1941, which led to the U.S. entry into World War II.

Tripartite Pact
A defensive military alliance between Germany, Japan, and Italy signed in Berlin on September 27, 1940.
Nanking Massacre
An episode of mass murder and mass rape committed by Japanese troops against the residents of Nanking, then the capital of the Republic of China during the Second Sino-Japanese War.

The attack on Pearl Harbor was a surprise military strike by the Imperial Japanese Navy against the United States naval base at Pearl Harbor, Hawaii Territory, on the morning of December 7, 1941. The attack led to the U.S. entry into World War II.

Japan intended the attack as a preventive action to keep the U.S. Pacific Fleet from interfering with military actions the Empire of Japan planned in Southeast Asia against overseas territories of the United Kingdom, the Netherlands, and the U.S. Over the next seven hours there were coordinated Japanese attacks on the U.S.-held Philippines, Guam, and Wake Island and on the British Empire in Malaya, Singapore, and Hong Kong.

The Day of the Attack

At 7:48 a.m. Hawaiian Time, the base was attacked by 353 Imperial Japanese fighter planes, bombers, and torpedo planes in two waves, launched from six aircraft carriers. All eight U.S. Navy battleships were damaged and four sunk. All but the USS Arizona (BB-39) were later raised, and six were returned to service and went on to fight in the war. The Japanese also sank or damaged three cruisers, three destroyers, an anti-aircraft training ship, and one minelayer. 188 U.S. aircraft were destroyed, 2,403 Americans were killed, and 1,178 others were wounded. Important base installations such as the power station, shipyard, maintenance, and fuel and torpedo storage facilities, as well as the submarine piers and headquarters building (also home of the intelligence section) were not attacked. Japanese losses were light: 29 aircraft and five midget submarines lost and 64 servicemen killed. One Japanese sailor, Kazuo Sakamaki, was captured.

The attack came as a profound shock to the American people and led directly to the American entry into World War II in both the Pacific and European theaters. The following day, December 8, the United States declared war on Japan. Domestic support for non-interventionism, which had been fading since the Fall of France in 1940, disappeared entirely. Clandestine support of the United Kingdom (e.g., the Neutrality Patrol) was replaced by active alliance. Subsequent operations by the U.S. prompted Nazi Germany and Fascist Italy to declare war on the U.S. on December 11, reciprocated by the U.S. the same day.

There were numerous historical precedents for unannounced military action by Japan. However, the lack of any formal warning, particularly while negotiations were still apparently ongoing, led President Franklin D. Roosevelt to proclaim December 7, 1941, “a date which will live in infamy.” Because the attack happened without a declaration of war and without explicit warning, the attack on Pearl Harbor was judged by the Tokyo Trials to be a war crime. 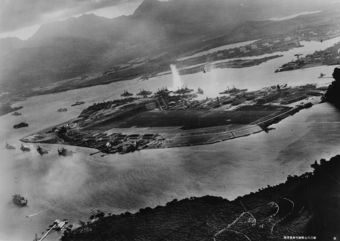 Attack on Pearl Harbor: Photograph of Battleship Row taken from a Japanese plane at the beginning of the attack. The explosion in the center is a torpedo strike on USS West Virginia. Two attacking Japanese planes can be seen: one over USS Neosho and one over the Naval Yard.

War between Japan and the U.S. was a possibility each nation had been planning for since the 1920s, and serious tensions began with Japan’s 1931 invasion of Manchuria. Over the next decade, Japan continued to expand into China, leading to all-out war between those countries in 1937. Japan spent considerable effort trying to isolate China and achieve sufficient resource independence to attain victory on the mainland; the “Southern Operation” was designed to assist these efforts.

From December 1937, events such as the Japanese attack on USS Panay, the Allison incident, and the Nanking Massacre swung public opinion in the West sharply against Japan. Fearing Japanese expansion, the U.S., the United Kingdom, and France provided loan assistance for war supply contracts to the Republic of China.

The U.S. ceased oil exports to Japan in July 1941 following Japanese expansion into French Indochina after the fall of France, in part because of new American restrictions on domestic oil consumption. This caused the Japanese to proceed with plans to take the Dutch East Indies, an oil-rich territory. On August 17, Roosevelt warned Japan that the U.S. was prepared to take steps against Japan if it attacked “neighboring countries.” The Japanese were faced with the option of either withdrawing from China and losing face or seizing and securing new sources of raw materials in the resource-rich, European-controlled colonies of Southeast Asia.

The Japanese attack had several major aims. First, it intended to destroy important American fleet units, thereby preventing the Pacific Fleet from interfering with Japanese conquest of the Dutch East Indies and Malaya and enabling Japan to conquer Southeast Asia without interference. Second, it was hoped to buy time for Japan to consolidate its position and increase its naval strength before shipbuilding authorized by the 1940 Vinson-Walsh Act erased any chance of victory. Third, to deliver a blow to America’s ability to mobilize its forces in the Pacific, battleships were chosen as the main targets since they were the prestige ships of any navy at the time. Finally, it was hoped that the attack would undermine American morale so the U.S. government would drop its demands contrary to Japanese interests and seek a compromise peace.

Aftermath of the Attack

The day after the attack, Roosevelt delivered his famous Infamy Speech to a Joint Session of Congress, calling for a formal declaration of war on the Empire of Japan. Congress obliged his request less than an hour later. On December 11, Germany and Italy, honoring their commitments under the Tripartite Pact, declared war on the United States. The pact was an earlier agreement between Germany, Italy, and Japan, which had the principal objective of limiting U.S. intervention in any conflicts involving the three nations. Congress issued a declaration of war against Germany and Italy later that same day. The UK actually declared war on Japan nine hours before the U.S. did, partially due to Japanese attacks on Malaya, Singapore, and Hong Kong and partially due to Winston Churchill’s promise to declare war “within the hour” of a Japanese attack on the United States.

The attack was an initial shock to all the Allies in the Pacific Theater. Further losses compounded the alarming setback. Japan attacked the Philippines hours later. Only three days after the attack on Pearl Harbor, the battleships Prince of Wales and Repulse were sunk off the coast of Malaya, causing British Prime Minister Winston Churchill later to recollect,

“In all the war I never received a more direct shock. As I turned and twisted in bed the full horror of the news sank in upon me. There were no British or American capital ships in the Indian Ocean or the Pacific except the American survivors of Pearl Harbor who were hastening back to California. Over this vast expanse of waters Japan was supreme and we everywhere were weak and naked.”