The Battle of Midway

The Battle of Midway was a decisive naval battle in the Pacific Theater of World War II, won by the American navy after code-breakers discovered the date and time of the Japanese attack.

Describe the events of the Battle of Midway

Greater East Asia Co-Prosperity Sphere
An imperialist propaganda concept created and promulgated for occupied Asian populations during the first third of the Shōwa era by the government and military of the Empire of Japan. It extended further than East Asia and promoted the cultural and economic unity of Northeast Asians, Southeast Asians, and Oceanians. It also declared the intention to create a self-sufficient “bloc of Asian nations led by the Japanese and free of Western powers.”
Pacific Theater
A major theater of the war between the Allies and Japan. It was defined by the Allied powers’ Pacific Ocean Area command, which included most of the Pacific Ocean and its islands and excluded mainland Asia, the Philippines, the Dutch East Indies, Borneo, Australia, most of the Territory of New Guinea, and the western part of the Solomon Islands.

The Battle of Midway was a decisive naval battle in the Pacific Theater of World War II. Between June 4 and 7, 1942, only six months after Japan’s attack on Pearl Harbor and one month after the Battle of the Coral Sea, the United States Navy under Admirals Chester Nimitz, Frank Jack Fletcher, and Raymond A. Spruance decisively defeated an attacking fleet of the Imperial Japanese Navy under Admirals Isoroku Yamamoto, Chuichi Nagumo, and Nobutake Kondo near Midway Atoll, inflicting devastating damage on the Japanese fleet that proved irreparable. Military historian John Keegan called it “the most stunning and decisive blow in the history of naval warfare.”

Reasons for the Attack

The Japanese operation, like the earlier attack on Pearl Harbor, sought to eliminate the United States as a strategic power in the Pacific, giving Japan a free hand in establishing its Greater East Asia Co-Prosperity Sphere. The Japanese hoped another demoralizing defeat would force the U.S. to capitulate in the Pacific War and thus ensure Japanese dominance in the Pacific. Luring the American aircraft carriers into a trap and occupying Midway was part of an overall “barrier” strategy to extend Japan’s defensive perimeter in response to the Doolittle air raid on Tokyo. This operation was also preparatory for further attacks against Fiji, Samoa, and Hawaii itself.

The plan was handicapped by faulty Japanese assumptions of the American reaction and poor initial dispositions. Most significantly, American cryptographers were able to determine the date and location of the planned attack, enabling the forewarned U.S. Navy to prepare its own ambush. All four of Japan’s large aircraft carriers—Akagi, Kaga, Soryu and Hiryu, part of the six-carrier force that attacked Pearl Harbor six months earlier—and a heavy cruiser were sunk, while the U.S. lost only the carrier Yorktown and a destroyer. After Midway and the exhausting attrition of the Solomon Islands campaign, Japan’s capacity to replace its losses in material (particularly aircraft carriers) and men (especially well-trained pilots and maintenance crewmen) rapidly became insufficient to cope with mounting casualties, while the United States’ massive industrial and training capabilities made losses far easier to replace. The Battle of Midway, along with the Guadalcanal Campaign, is considered a turning point in the Pacific War. 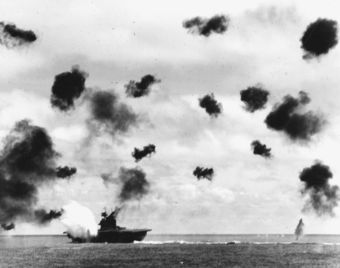 USS Yorktown: Yorktown at the moment of impact of a torpedo from a Nakajima B5N of Lieutenant Hashimoto’s 2nd fleet.

The Role of Code-Breaking

American Admiral Chester Nimitz had one priceless advantage going into battle: US cryptanalysts had partially broken the Japanese Navy’s JN-25b code. Since early 1942, the US had been decoding messages stating that there would soon be an operation at objective “AF”. It was initially not known where “AF” was, but Commander Joseph Rochefort and his team at Station HYPO were able to confirm that it was Midway; Captain Wilfred Holmes devised a ruse of telling the base at Midway (by secure undersea cable) to broadcast an uncoded radio message stating that Midway’s water purification system had broken down. Within 24 hours, the code breakers picked up a Japanese message that “AF was short on water.” No Japanese radio operators who intercepted the message seemed concerned that the Americans were broadcasting uncoded that a major naval installation close to the Japanese threat ring was having a water shortage, which could have tipped off Japanese intelligence officers that it was a deliberate attempt at deception. HYPO was also able to determine the date of the attack as either June 4 or 5 and provide Nimitz with a complete IJN order of battle. Japan had a new codebook, but its introduction was delayed, enabling HYPO to read messages for several crucial days. The new code came into use on May 24 and took several days to crack, but the important breaks had already been made.

As a result, the Americans entered the battle with a very good picture of where, when, and in what strength the Japanese would appear. Nimitz knew that the Japanese had negated their numerical advantage by dividing their ships into four separate task groups, all too widely separated to support each other. This dispersal resulted in few fast ships being available to escort the Carrier Striking Force, reducing the number of anti-aircraft guns protecting the carriers. Nimitz calculated that the aircraft on his three carriers plus those on Midway Island gave the U.S. rough parity with Yamamoto’s four carriers, mainly because American carrier air groups were larger than Japanese ones. The Japanese, by contrast, remained mainly unaware of their opponent’s true strength and dispositions even after the battle began.

As anticipated by Nimitz, the Japanese fleet arrived off Midway on June 4 and was spotted by PBY patrol aircraft. Nagumo executed a first strike against Midway, while Fletcher launched his aircraft for Nagumo’s carriers. At 09:20 the first U.S. carrier aircraft arrived, TBD Devastator torpedo bombers from Hornet, but their attacks were poorly coordinated and ineffectual; thanks in part to faulty aerial torpedoes, they failed to score a single hit and all 15 were wiped out by defending Zero fighters. At 09:35, 15 additional TBDs from Enterprise attacked and 14 were lost, again with no hits. Thus far, Fletcher’s attacks were disorganized and seemingly ineffectual, but succeeded in drawing Nagumo’s defensive fighters down to sea level where they expended much of their fuel and ammunition repulsing the two waves of torpedo bombers. As a result, when U.S. dive bombers arrived at high altitude, the Zeros were poorly positioned to defend. To make matters worse, Nagumo’s four carriers drifted out of formation in their efforts to avoid torpedoes, reducing the concentration of their anti-aircraft fire. Nagumo’s indecision had also created confusion aboard his carriers. Alerted to the need of a second strike on Midway but wary of the need to deal with the American carriers that he now knew were in the vicinity, Nagumo twice changed the arming orders for his aircraft. As a result, the American dive bombers found the Japanese carriers with their decks cluttered with munitions as the crews worked hastily to properly re-arm their air groups.

With the Japanese CAP out of position and the carriers at their most vulnerable, SBD Dauntlesses from Enterprise and Yorktown appeared at an altitude of 10,000 feet (3,000 m) and commenced their attack, quickly dealing fatal blows to three fleet carriers: Sōryū, Kaga, and Akagi. Within minutes, all three were ablaze and had to be abandoned with great loss of life. Hiryū managed to survive the wave of dive bombers and launched a counter-attack against the American carriers, which caused severe damage to Yorktown (later finished off by a Japanese submarine). A second attack from the U.S. carriers a few hours later found and destroyed Hiryū, the last remaining fleet carrier available to Nagumo.

With his carriers lost and the Americans withdrawn out of range of his powerful battleships, Yamamoto was forced to call off the operation, leaving Midway in American hands. The battle proved to be a decisive victory for the Allies. For the second time, Japanese expansion had been checked and its formidable Combined Fleet was significantly weakened by the loss of four fleet carriers and many highly trained, virtually irreplaceable personnel. Japan would be largely on the defensive for the rest of the war.