In the 16th and 17th centuries, European scientists began increasingly applying quantitative measurements to the measurement of physical phenomena on the earth, which translated into the rapid development of mathematics and physics.

scientific revolution
The emergence of modern science during the early modern period, when developments in mathematics, physics, astronomy, biology (including human anatomy), and chemistry transformed societal views about nature. It began in Europe towards the end of the Renaissance period, and continued through the late 18th century, influencing the intellectual social movement known as the Enlightenment.
scientific method
A body of techniques for investigating phenomena, acquiring new knowledge, or correcting and integrating previous knowledge that apply empirical or measurable evidence subject to specific principles of reasoning. It has characterized natural science since the 17th century, consisting in systematic observation, measurement, and experiment, and the formulation, testing, and modification of hypotheses.
Copernican Revolution
The paradigm shift from the Ptolemaic model of the heavens, which described the cosmos as having Earth stationary at the center of the universe, to the heliocentric model with the sun at the center of the solar system. Beginning with the publication of Nicolaus Copernicus’s De revolutionibus orbium coelestium, contributions to the “revolution” continued, until finally ending with Isaac Newton’s work over a century later.

Under the scientific method that was defined and applied in the 17th century, natural and artificial circumstances were abandoned, and a research tradition of systematic experimentation was slowly accepted throughout the scientific community. The philosophy of using an inductive approach to nature—to abandon assumption and to attempt to simply observe with an open mind—was in strict contrast with the earlier, Aristotelian approach of deduction, by which analysis of known facts produced further understanding. In practice, many scientists (and philosophers) believed that a healthy mix of both was needed—the willingness to question assumptions, yet also to interpret observations assumed to have some degree of validity. That principle was particularly true for mathematics and physics. RenéDescartes, whose thought emphasized the power of reasoning but also helped establish the scientific method, distinguished between the knowledge that could be attained by reason alone (rationalist approach), which he thought was mathematics, and the knowledge that required experience of the world, which he thought was physics.

To the extent that medieval natural philosophers used mathematical problems, they limited social studies to theoretical analyses of local speed and other aspects of life. The actual measurement of a physical quantity, and the comparison of that measurement to a value computed on the basis of theory, was largely limited to the mathematical disciplines of astronomy and optics in Europe. In the 16th and 17th centuries, European scientists began increasingly applying quantitative measurements to the measurement of physical phenomena on Earth.

While the dates of the scientific revolution are disputed, the publication in 1543 of Nicolaus Copernicus’s De revolutionibus orbium coelestium (On the Revolutions of the Heavenly Spheres) is often cited as marking the beginning of the scientific revolution. The book proposed a heliocentric system contrary to the widely accepted geocentric system of that time. Tycho Brahe accepted Copernicus’s model but reasserted geocentricity. However, Tycho challenged the Aristotelian model when he observed a comet that went through the region of the planets. This region was said to only have uniform circular motion on solid spheres, which meant that it would be impossible for a comet to enter into the area. Johannes Kepler followed Tycho and developed the three laws of planetary motion. Kepler would not have been able to produce his laws without the observations of Tycho, because they allowed Kepler to prove that planets traveled in ellipses, and that the sun does not sit directly in the center of an orbit, but at a focus. Galileo Galilei came after Kepler and developed his own telescope with enough magnification to allow him to study Venus and discover that it has phases like a moon. The discovery of the phases of Venus was one of the more influential reasons for the transition from geocentrism to heliocentrism. Isaac Newton’s Philosophiæ Naturalis Principia Mathematica concluded the Copernican Revolution. The development of his laws of planetary motion and universal gravitation explained the presumed motion related to the heavens by asserting a gravitational force of attraction between two objects.

Other Advancements in Physics and Mathematics

Galileo was one of the first modern thinkers to clearly state that the laws of nature are mathematical. In broader terms, his work marked another step towards the eventual separation of science from both philosophy and religion, a major development in human thought. Galileo showed a remarkably modern appreciation for the proper relationship between mathematics, theoretical physics, and experimental physics. He understood the parabola, both in terms of conic sections and in terms of the ordinate (y) varying as the square of the abscissa (x). He further asserted that the parabola was the theoretically ideal trajectory of a uniformly accelerated projectile in the absence of friction and other disturbances.

Newton’s Principia formulated the laws of motion and universal gravitation, which dominated scientists’ view of the physical universe for the next three centuries. By deriving Kepler’s laws of planetary motion from his mathematical description of gravity, and then using the same principles to account for the trajectories of comets, the tides, the precession of the equinoxes, and other phenomena, Newton removed the last doubts about the validity of the heliocentric model of the cosmos. This work also demonstrated that the motion of objects on Earth, and of celestial bodies, could be described by the same principles. His prediction that Earth should be shaped as an oblate spheroid was later vindicated by other scientists. His laws of motion were to be the solid foundation of mechanics; his law of universal gravitation combined terrestrial and celestial mechanics into one great system that seemed to be able to describe the whole world in mathematical formulae. Newton also developed the theory of gravitation. After the exchanges with Robert Hooke, English natural philosopher, architect and polymath, he worked out proof that the elliptical form of planetary orbits would result from a centripetal force inversely proportional to the square of the radius vector.

The scientific revolution also witnessed the development of modern optics. Kepler published Astronomiae Pars Optica (The Optical Part of Astronomy) in 1604. In it, he described the inverse-square law governing the intensity of light, reflection by flat and curved mirrors, and principles of pinhole cameras, as well as the astronomical implications of optics, such asparallax and the apparent sizes of heavenly bodies. Willebrord Snellius found the mathematical law of refraction, now known as Snell’s law, in 1621. Subsequently, Descartes showed, by using geometric construction and the law of refraction (also known as Descartes’ law), that the angular radius of a rainbow is 42°. He also independently discovered the law of reflection. Finally, Newton investigated the refraction of light, demonstrating that a prism could decompose white light into a spectrum of colors, and that a lens and a second prism could recompose the multicolored spectrum into white light. He also showed that the colored light does not change its properties by separating out a colored beam and shining it on various objects. 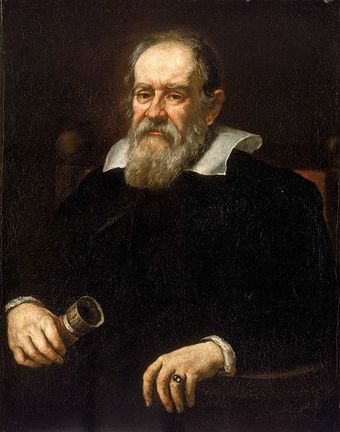 Galileo Galilei (1564-1642) improved the telescope, with which he made several important astronomical discoveries, including the four largest moons of Jupiter, the phases of Venus, and the rings of Saturn, and made detailed observations of sunspots. He developed the laws for falling bodies based on pioneering quantitative experiments, which he analyzed mathematically.

Dr. William Gilbert, in De Magnete, invented the New Latin word electricus from ἤλεκτρον (elektron), the Greek word for “amber.” Gilbert undertook a number of careful electrical experiments, in the course of which he discovered that many substances were capable of manifesting electrical properties. He also discovered that a heated body lost its electricity, and that moisture prevented the electrification of all bodies, due to the now well-known fact that moisture impaired the insulation of such bodies. He also noticed that electrified substances attracted all other substances indiscriminately, whereas a magnet only attracted iron. The many discoveries of this nature earned for Gilbert the title of “founder of the electrical science.”

Robert Boyle also worked frequently at the new science of electricity, and added several substances to Gilbert’s list of electrics. In 1675, he stated that electric attraction and repulsion can act across a vacuum. One of his important discoveries was that electrified bodies in a vacuum would attract light substances, this indicating that the electrical effect did not depend upon the air as a medium. He also added resin to the then known list of electrics. By the end of the 17th Century, researchers had developed practical means of generating electricity by friction with an anelectrostatic generator, but the development of electrostatic machines did not begin in earnest until the 18th century, when they became fundamental instruments in the studies about the new science of electricity. The first usage of the word electricity is ascribed to Thomas Browne in 1646 work. In 1729, Stephen Gray demonstrated that electricity could be “transmitted” through metal filaments.

Treasures of the RAS: Starry Messenger by Galileo Galilei: In 1610, Galileo published this book describing his observations of the sky with a new invention – the telescope. In it he describes his discovery of the moons of Jupiter, of stars too faint to be seen by the naked eye, and of mountains on the moon. The book was the first scientific publication to be based on data from a telescope. It was an important step towards our modern understanding of the solar system. The Latin title is Sidereus Nuncius, which translates as Starry Messenger, or Sidereal Message.