19.3.1: Roots of the Scientific Revolution

The scientific revolution, which emphasized systematic experimentation as the most valid research method, resulted in developments in mathematics, physics, astronomy, biology, and chemistry. These developments transformed the views of society about nature.

scientific method
A body of techniques for investigating phenomena, acquiring new knowledge, or correcting and integrating previous knowledge, through the application of empirical or measurable evidence subject to specific principles of reasoning. It has characterized natural science since the 17th century, consisting in systematic observation, measurement, and experiment, and the formulation, testing, and modification of hypotheses.
Baconian method
The investigative method developed by Sir Francis Bacon. It was put forward in Bacon’s book Novum Organum (1620), (or New Method), and was supposed to replace the methods put forward in Aristotle’s Organon. This method was influential upon the development of the scientific method in modern science, but also more generally in the early modern rejection of medieval Aristotelianism.
Galileo
An Italian thinker (1564-1642) and key figure in the scientific revolution who improved the telescope, made astronomical observations, and put forward the basic principle of relativity in physics.
empiricism
A theory stating that knowledge comes only, or primarily, from sensory experience. It emphasizes evidence, especially the kind of evidence gathered through experimentation and by use of the scientific method.
British Royal Society
A British learned society for science; possibly the oldest such society still in existence, having been founded in November 1660.

The scientific revolution was the emergence of modern science during the early modern period, when developments in mathematics, physics, astronomy, biology (including human anatomy), and chemistry transformed societal views about nature. The scientific revolution began in Europe toward the end of the Renaissance period, and continued through the late 18th century, influencing the intellectual social movement known as the Enlightenment. While its dates are disputed, the publication in 1543 of Nicolaus Copernicus’s De revolutionibus orbium coelestium (On the Revolutions of the Heavenly Spheres) is often cited as marking the beginning of the scientific revolution.

The scientific revolution was built upon the foundation of ancient Greek learning and science in the Middle Ages, as it had been elaborated and further developed by Roman/Byzantine science and medieval Islamic science. The Aristotelian tradition was still an important intellectual framework in the 17th century, although by that time natural philosophers had moved away from much of it. Key scientific ideas dating back to classical antiquity had changed drastically over the years, and in many cases been discredited. The ideas that remained (for example, Aristotle’s cosmology, which placed the Earth at the center of a spherical hierarchic cosmos, or the Ptolemaic model of planetary motion) were transformed fundamentally during the scientific revolution.

The change to the medieval idea of science occurred for four reasons:

Under the scientific method that was defined and applied in the 17th century, natural and artificial circumstances were abandoned, and a research tradition of systematic experimentation was slowly accepted throughout the scientific community. The philosophy of using an inductive approach to nature (to abandon assumption and to attempt to simply observe with an open mind) was in strict contrast with the earlier, Aristotelian approach of deduction, by which analysis of known facts produced further understanding. In practice, many scientists and philosophers believed that a healthy mix of both was needed—the willingness to both question assumptions, and to interpret observations assumed to have some degree of validity.

During the scientific revolution, changing perceptions about the role of the scientist in respect to nature, the value of evidence, experimental or observed, led towards a scientific methodology in which empiricism played a large, but not absolute, role. The term British empiricism came into use to describe philosophical differences perceived between two of its founders—Francis Bacon, described as empiricist, and René Descartes, who was described as a rationalist. Bacon’s works established and popularized inductive methodologies for scientific inquiry, often called the Baconian method, or sometimes simply the scientific method. His demand for a planned procedure of investigating all things natural marked a new turn in the rhetorical and theoretical framework for science, much of which still surrounds conceptions of proper methodology today. Correspondingly, Descartes distinguished between the knowledge that could be attained by reason alone (rationalist approach), as, for example, in mathematics, and the knowledge that required experience of the world, as in physics.

Thomas Hobbes, George Berkeley, and David Hume were the primary exponents of empiricism, and developed a sophisticated empirical tradition as the basis of human knowledge. The recognized founder of the approach was John Locke, who proposed in An Essay Concerning Human Understanding (1689) that the only true knowledge that could be accessible to the human mind was that which was based on experience.

Many new ideas contributed to what is called the scientific revolution. Some of them were revolutions in their own fields. These include: 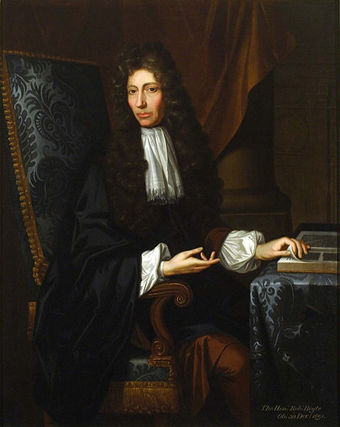 The Shannon Portrait of the Hon. Robert Boyle F. R. S. (1627-1691) Robert Boyle (1627-1691), an Irish-born English scientist, was an early supporter of the scientific method and founder of modern chemistry. Boyle is known for his pioneering experiments on the physical properties of gases, his authorship of the Sceptical Chymist, his role in creating the Royal Society of London, and his philanthropy in the American colonies.

The Scientific Revolution and the Enlightenment

The scientific revolution laid the foundations for the Age of Enlightenment, which centered on reason as the primary source of authority and legitimacy, and emphasized the importance of the scientific method. By the 18th century, when the Enlightenment flourished, scientific authority began to displace religious authority, and disciplines until then seen as legitimately scientific (e.g.,  alchemy and astrology) lost scientific credibility.

Science came to play a leading role in Enlightenment discourse and thought. Many Enlightenment writers and thinkers had backgrounds in the sciences, and associated scientific advancement with the overthrow of religion and traditional authority in favor of the development of free speech and thought. Broadly speaking, Enlightenment science greatly valued empiricism and rational thought, and was embedded with the Enlightenment ideal of advancement and progress. At the time, science was dominated by scientific societies and academies, which had largely replaced universities as centers of scientific research and development. Societies and academies were also the backbone of the maturation of the scientific profession. Another important development was the popularization of science among an increasingly literate population. The century saw significant advancements in the practice of medicine, mathematics, and physics; the development of biological taxonomy; a new understanding of magnetism and electricity; and the maturation of chemistry as a discipline, which established the foundations of modern chemistry. 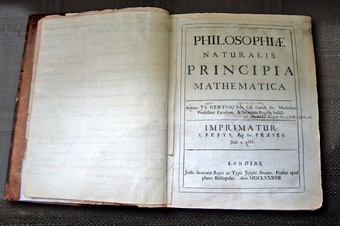 Newton’s Principia formulated the laws of motion and universal gravitation, which dominated scientists’ view of the physical universe for the next three centuries. By deriving Kepler’s laws of planetary motion from his mathematical description of gravity, and then using the same principles to account for the trajectories of comets, the tides, the precession of the equinoxes, and other phenomena, Newton removed the last doubts about the validity of the heliocentric model of the cosmos. This work also demonstrated that the motion of objects on Earth and of celestial bodies could be described by the same principles. His laws of motion were to be the solid foundation of mechanics.