The victorious Allies of WWI imposed harsh reparations on Germany, which were both economically and psychologically damaging. Historians have long argued over the extent to which the reparations led to Germany’s severe economic depression in the interwar period.

Young Plan
A program for settling German reparations debts after World War I, written in 1929 and formally adopted in 1930. After the Dawes Plan was put into operation in 1924, it became apparent that Germany would not willingly meet the annual payments over an indefinite period of time. This new plan reduced further payments by about 20 percent.
indemnities
An obligation by a person to provide compensation for a particular loss suffered by another person.
reparations
Payments intended to cover damage or injury inflicted during a war. Generally, the term refers to money or goods changing hands, but not to the annexation of land.

World War I reparations were imposed upon the Central Powers during the Paris Peace Conference following their defeat in the First World War by the Allied and Associate Powers. Each defeated power was required to make payments in either cash or kind. Because of the financial situation Austria, Hungary, and Turkey found themselves in after the war, few to no reparations were paid and the requirements were cancelled. Bulgaria paid only a fraction of what was required before its reparations were reduced and then cancelled. Historian Ruth Henig argues that the German requirement to pay reparations was the “chief battleground of the post-war era” and “the focus of the power struggle between France and Germany over whether the Versailles Treaty was to be enforced or revised.”

The Treaty of Versailles and the 1921 London Schedule of Payments required Germany to pay 132 billion gold marks (USD $33 billion) in reparations to cover civilian damage caused during the war. This figure was divided into three categories of bonds: A, B, and C. Of these, Germany was only required to pay towards ‘A’ and ‘B’ bonds totaling 50 billion marks (USD $12.5 billion). The remaining ‘C’ bonds, which Germany did not have to pay, were designed to deceive the Anglo-French public into believing Germany was being heavily fined and punished for the war.

Because of the lack of reparation payments by Germany, France occupied the Ruhr in 1923 to enforce payments, causing an international crisis that resulted in the implementation of the Dawes Plan in 1924. This plan outlined a new payment method and raised international loans to help Germany to meet her reparation commitments. In the first year following the implementation of the plan, Germany would have to pay 1 billion marks. This would rise to 2.5 billion marks per year by the fifth year of the plan. A Reparations Agency was established with Allied representatives to organize the payment of reparations. Despite this, by 1928 Germany called for a new payment plan, resulting in the Young Plan that established the German reparation requirements at 112 billion marks (USD $26.3 billion) and created a schedule of payments that would see Germany complete payments by 1988. With the collapse of the German economy in 1931, reparations were suspended for a year and in 1932 during the Lausanne Conference they were cancelled altogether. Between 1919 and 1932, Germany paid fewer than 21 billion marks in reparations.

The German people saw reparations as a national humiliation; the German Government worked to undermine the validity of the Treaty of Versailles and the requirement to pay. British economist John Maynard Keynes called the treaty a Carthaginian peace that would economically destroy Germany. His arguments had a profound effect on historians, politicians, and the public. Despite Keynes’ arguments and those by later historians supporting or reinforcing Keynes’ views, the consensus of contemporary historians is that reparations were not as intolerable as the Germans or Keynes had suggested and were within Germany’s capacity to pay had there been the political will to do so.

Most of the war’s major battles occurred in France, substantially damaging the French countryside. Furthermore, in 1918 during the German retreat, German troops devastated France’s most industrialized region in the north-east (Nord-Pas de Calais Mining Basin). Extensive looting took place as German forces removed whatever material they could use and destroyed the rest. Hundreds of mines were destroyed along with railways, bridges, and entire villages. Prime Minister of France Georges Clemenceau was determined, for these reasons, that any just peace required Germany to pay reparations for the damage it had caused. Clemenceau viewed reparations as a way of weakening Germany to ensure it could never threaten France again. Reparations would also go towards the reconstruction costs in other countries, including Belgium, which was also directly affected by the war. 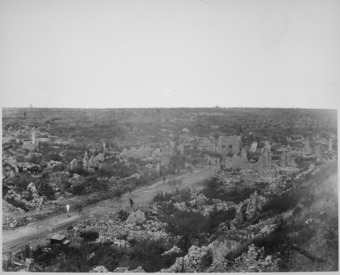 Reparations: Avocourt, 1918, one of the many destroyed French villages where reconstruction would be funded by reparations.

British Prime Minister David Lloyd George opposed harsh reparations, arguing for a smaller sum that was less damaging to the German economy so that Germany could remain a viable economic power and trading partner. He also argued that reparations should include war pensions for disabled veterans and allowances for war widows, which would reserve a larger share of the reparations for the British Empire. Woodrow Wilson opposed these positions and was adamant that no indemnity should be imposed upon Germany.

The Paris Peace Conference opened on January 18, 1919, aiming to establish a lasting peace between the Allied and Central Powers. Demanding compensation from the defeated party was a common feature of peace treaties. However, the financial terms of treaties signed during the peace conference were labelled reparations to distinguish them from punitive settlements usually known as indemnities, intended for reconstruction and compensating families bereaved by the war. The opening article of the reparation section of the Treaty of Versailles, Article 231, served as a legal basis for the following articles, which obliged Germany to pay compensation and limited German responsibility to civilian damages. The same article, with the signatory’s name changed, was also included in the treaties signed by Germany’s allies.

Did Reparations Ruin the German Economy?

Erik Goldstein wrote that in 1921, the payment of reparations caused a crisis and that the occupation of the Ruhr had a disastrous effect on the German economy, resulting in the German Government printing more money as the currency collapsed. Hyperinflation began and printing presses worked overtime to print Reichsbank notes; by November 1923 one U.S. dollar was worth 4.2 trillion marks. Geoff Harcourt writes that Keynes’ arguments that reparations would lead to German economic collapse have been adopted “by historians of almost all political persuasions” and have influenced the way historians and the public “see the unfolding events in Germany and the decades between Versailles and the outbreak of the Second World War.”

But not all historians agree. According to Detlev Peukert, the financial problems that arose in the early 1920s were a result of post-war loans and the way Germany funded its war effort, not reparations. During World War I, Germany did not raise taxes or create new ones to pay for wartime expenses. Rather, loans were taken out, placing Germany in an economically precarious position as more money entered circulation, destroying the link between paper money and the gold reserve maintained before the war. With its defeat, Germany could not impose reparations and pay off war debts, which were now colossal.

Niall Ferguson partially supports this analysis. He says that had reparations not been imposed, Germany would still have had significant problems caused by the need to pay war debts and the demands of voters for more social services. Ferguson also says that these problems were aggravated by a trade deficit and a weak exchange rate for the mark during 1920. Afterwards, as the value of the mark rose, inflation became a problem. None of these effects, he says, were the result of reparations.

Several historians take the middle ground between condemning reparations and supporting the argument that they were not a complete burden upon Germany. Detlev Peukert states, “Reparations did not, in fact, bleed the German economy” as had been feared; however, the “psychological effects of reparations were extremely serious, as was the strain that the vicious circle of credits and reparations placed the international financial system.”