In 1915, the Ottoman government decided to issue the Tehcir Law, which started the mass deportation of ethnic Armenians, particularly from the provinces close to the Ottoman-Russian front. This resulted in what became known as the Armenian Genocide.

Red Sunday
An event during the Armenian Genocide in which leaders of the Armenian community in the Ottoman capital of Constantinople, and later other locations, were arrested and moved to two holding centers near Ankara. The order to do so was given by Minister of the Interior Talaat Pasha on April 24, 1915. On that night, the first wave of 235 to 270 Armenian intellectuals of Constantinople were arrested. Eventually, arrests and deportations totaled 2,345.
genocide
The United Nations Genocide Convention defines this as “acts committed with intent to destroy, in whole or in part, a national, ethnic, racial or religious group.” The term was coined in response to the mass deportation and killing of Armenians by the Ottomans.
Tehcir Law
A law passed by the Ottoman Parliament on May 27, 1915, authorizing the deportation of the Ottoman Empire’s Armenian population. The resettlement campaign resulted in the deaths of anywhere between 800,000 and more than 1.8 million civilians in what is commonly referred to as the Armenian Genocide.

The Armenian Genocide was the Ottoman government’s systematic extermination of 1.5 million Armenians, mostly Ottoman citizens within the Ottoman Empire and its successor state, the Republic of Turkey. The starting date is conventionally considered April 24, 1915, the day that Ottoman authorities rounded up, arrested, and deported 235 to 270 Armenian intellectuals and community leaders from Constantinople to Ankara, the majority of whom were eventually murdered. The genocide was carried out during and after World War I and implemented in two phases: the wholesale killing of the able-bodied male population through massacre and subjection of army conscripts to forced labor, followed by the deportation of women, children, the elderly, and the infirm on death marches to the Syrian desert. Driven forward by military escorts, the deportees were deprived of food and water and subjected to periodic robbery, rape, and massacre. Other indigenous and Christian ethnic groups such as the Assyrians and the Ottoman Greeks were similarly targeted for extermination by the Ottoman government in the Assyrian genocide and the Greek genocide, and their treatment is considered by some historians to be part of the same genocidal policy. Most Armenian diaspora communities around the world came into being as a direct result of the genocide.

Raphael Lemkin was explicitly moved by the Armenian annihilation to define systematic and premeditated exterminations within legal parameters and coin the word genocide in 1943. The Armenian Genocide is acknowledged as one of the first modern genocides, with scholars noting the organized manner in which the Armenians were eliminated. This is the second most-studied case of genocide after the Holocaust.

Turkey, the successor state of the Ottoman Empire, denies the word genocide as an accurate term for the mass killings of Armenians that began under Ottoman rule in 1915. Recently, it has been faced with repeated calls to join the 29 countries that have officially recognized the mass killings as genocide, along with most genocide scholars and historians.

By 1914, Ottoman authorities had already begun a propaganda drive to present Armenians living in the Ottoman Empire as a threat to security. An Ottoman naval officer in the War Office described the planning:

In order to justify this enormous crime the requisite propaganda material was thoroughly prepared in Istanbul. [It included such statements as] ‘the Armenians are in league with the enemy. They will launch an uprising in Istanbul, kill off the Ittihadist leaders and will succeed in opening up the straits [of the Dardanelles].’

On the night of April 23-24, 1915, known as Red Sunday, the Ottoman government rounded up and imprisoned an estimated 250 Armenian intellectuals and community leaders of the Ottoman capital, Constantinople, and later those in other centers, who were moved to two holding centers near Ankara. This date coincided with Allied troop landings at Gallipoli after unsuccessful Allied naval attempts to break through the Dardanelles to Constantinople in February and March 1915.

On May 29, 1915, the CUP Central Committee passed the Temporary Law of Deportation (“Tehcir Law”), giving the Ottoman government and military authorization to deport anyone it “sensed” as a threat to national security.

With the implementation of Tehcir Law, the confiscation of Armenian property and the slaughter of Armenians that ensued upon its enactment outraged much of the western world. While the Ottoman Empire’s wartime allies offered little protest, a wealth of German and Austrian historical documents has since come to attest to the witnesses’ horror at the killings and mass starvation of Armenians. In the United States, The New York Times reported almost daily on the mass murder of the Armenian people, describing the process as “systematic”, “authorized” and “organized by the government.” Theodore Roosevelt would later characterize this as “the greatest crime of the war.”

The Armenians were marched out to the Syrian town of Deir ez-Zor and the surrounding desert. There is no evidence that the Ottoman government provided the extensive facilities and supplies that would have been necessary to sustain the life of hundreds of thousands of Armenian deportees during their forced march to the Syrian desert or after. By August 1915, The New York Times repeated an unattributed report that “the roads and the Euphrates are strewn with corpses of exiles, and those who survive are doomed to certain death. It is a plan to exterminate the whole Armenian people.” Authorities were completely aware that by abandoning the Armenian deportees in the desert they were condemning them to certain death.

Rape was an integral part of the genocide; military commanders told their men to “do to [the women] whatever you wish,” resulting in widespread sexual abuse. Deportees were displayed naked in Damascus and sold as sex slaves in some areas, including Mosul according to the report of the German consul there. This constituted an important source of income for accompanying soldiers and resulted in the deaths of girls and women left behind.

Eitan Belkind was a Nili member who infiltrated the Ottoman army as an official, assigned to the headquarters of Kemal Pasha. He claims to have witnessed the burning of 5,000 Armenians.

Lt. Hasan Maruf of the Ottoman army describes how a village’s population was taken together and burned. The Commander of the Third Army Vehib’s 12-page affidavit, dated December 5, 1918, was presented in the Trabzon trial series (March 29, 1919) included in the Key Indictment. It reported a mass burning of the population of an entire village near Muş: “The shortest method for disposing of the women and children concentrated in the various camps was to burn them.” Vahakn Dadrian wrote that 80,000 Armenians in 90 villages across the Muş plain were burned in “stables and haylofts.”

While there is no consensus as to how many Armenians lost their lives during the Armenian Genocide, there is general agreement among western historians that more than 500,000 Armenians died between 1914 and 1918. Other estimates vary between 800,000 and 1,500,000. 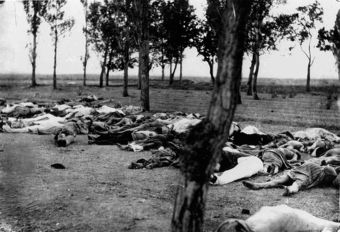 Armenian Genocide: “Those who fell by the wayside. Scenes like this were common all over the Armenian provinces in the spring and summer months of 1915. Death in its several forms—massacre, starvation, exhaustion—destroyed the larger part of the refugees. The Turkish policy was that of extermination under the guise of deportation.”

According to Kemal Çiçek, the head of the Armenian Research Group at the Turkish Historical Society, in Turkey there is no official thesis on the Armenian issue. The Republic of Turkey’s formal stance is that the deaths of Armenians during the “relocation” or “deportation” cannot aptly be deemed “genocide,” a position with a plethora of diverging justifications: that the killings were not deliberate or systematically orchestrated; that the killings were justified because Armenians posed a Russian-sympathizing threat as a cultural group; that the Armenians merely starved to death; or various characterizations of marauding “Armenian gangs.”

As a response to continued denial by the Turkish state, many activists from Armenian Diaspora communities have pushed for formal recognition of the Armenian genocide from various governments around the world. Twenty-nine countries and forty-three U.S. states have adopted resolutions acknowledging the Armenian Genocide as a bona fide historical event. On March 4, 2010, a U.S. congressional panel narrowly voted that the incident was indeed genocide; within minutes the Turkish government issued a statement critical of “this resolution which accuses the Turkish nation of a crime it has not committed.”

The Armenian Genocide happened before the term “genocide” was coined. English-language words and phrases used by contemporary accounts to characterize the event include “massacres,” “atrocities,” “annihilation,” “holocaust,” “the murder of a nation,” “race extermination,” and “a crime against humanity.”

Armenians After the Genocide: Diaspora

Following the breakup of the Russian Empire in the aftermath of World War I, Armenia was briefly an independent republic from 1918 to 1920. In late 1920, the communists came to power following an invasion of Armenia by the Red Army, and in 1922, Armenia became part of the Transcaucasian SFSR of the Soviet Union, later forming the Armenian Soviet Socialist Republic (1936 to September 21, 1991). In 1991, Armenia declared independence from the USSR and established the second Republic of Armenia.

The modern Armenian diaspora was formed largely after World War I as a result of the Armenian Genocide. After the fall of the Ottoman Empire, Turkish nationalists led by Mustafa Kemal Atatürk took the region of Western Armenia. As a result of the Armenian Genocide, approximately half a million Armenians were forced to flee to different parts of the world and created new Armenian communities far from their native land. Through marriage and procreation, the number of Armenians in the diaspora who trace their lineage to those Armenians who survived and fled Western Armenia is now several million. Since the breakup of the Soviet Union, approximately one million Armenians have joined the diaspora largely as a result of difficult economic conditions in Armenia.