Partition of the Ottoman Empire

34.2: Partition of the Ottoman Empire

The partitioning of the Ottoman Empire was planned in several secret agreements made by the Allies early in the course of World War I, notably the Sykes-Picot Agreement in 1916.

T. E. Lawrence
A British author, archaeologist, military officer, and diplomat. He was renowned for his liaison role during the Sinai and Palestine Campaign and the Arab Revolt against the Ottoman Empire during the First World War. The breadth and variety of his activities and associations, and his ability to describe them vividly in writing, earned him international fame as Lawrence of Arabia—a title used for the 1962 film based on his wartime activities.
Triple Entente
The understanding linking the Russian Empire, the French Third Republic, and the United Kingdom of Great Britain and Ireland after the signing of the Anglo-Russian Entente on August 31, 1907. The understanding between the three powers, supplemented by agreements with Japan and Portugal, constituted a powerful counterweight to the Triple Alliance of Germany, Austria-Hungary, and the Kingdom of Italy, though Italy did not side with Germany and Austria during World War I.
Islamic State of Iraq and the Levant
A jihadist unrecognised state and militant group that follows a fundamentalist doctrine of Sunni Islam. This group has been designated a terrorist organization by the United Nations and many individual countries. It is widely known for its videoed beheadings of both soldiers and civilians, including journalists and aid workers, and destruction of cultural heritage sites. The United Nations holds them responsible for human rights abuses and war crimes, and Amnesty International charged the group with ethnic cleansing on a “historic scale” in northern Iraq.

The Sykes-Picot Agreement, officially known as the Asia Minor Agreement, was a secret 1916 agreement between Great Britain and France, to which the Russian Empire assented. The agreement defined their mutually agreed spheres of influence and control in Southwestern Asia. The agreement was based on the premise that the Triple Entente would succeed in defeating the Ottoman Empire during World War I. The negotiations leading to the agreement occurred between November 1915 and March 1916,  and it was signed May 16, 1916. The deal was exposed to the public in 1917. The agreement is still mentioned when considering the region and its present-day conflicts.

The agreement allocated to Britain control of areas roughly comprising the coastal strip between the Mediterranean Sea and the River Jordan, Jordan, southern Iraq, and an additional small area that included the ports of Haifa and Acre, to allow access to the Mediterranean. France got control of southeastern Turkey, northern Iraq, Syria, and Lebanon. Russia received Istanbul, the Turkish Straits and Armenia. The controlling powers were left free to determine state boundaries within their areas. Further negotiation was expected to determine international administration pending consultations with Russia and other powers, including Hussein bin Ali, Sharif of Mecca.

Given Ottoman defeat in 1918 and the subsequent partitioning of the Ottoman Empire, the agreement effectively divided the Ottoman Arab provinces outside the Arabian peninsula into areas of British and French control and influence. An international administration was proposed for Palestine as part of the Acre-Haifa zone, intended to be an British enclave in northern Palestine to enable access to the Mediterranean. The British gained control of the territory in 1920 and ruled it as Mandatory Palestine from 1923 until 1948. They also ruled Mandatory Iraq from 1920 until 1932, while the French Mandate for Syria and the Lebanon lasted from 1923 to 1946.

The terms were negotiated by British diplomat Mark Sykes and a French counterpart, François Georges-Picot. The Tsarist government was a minor party to the Sykes-Picot agreement; when the Bolsheviks published the agreement on November 23, 1917, after the Russian Revolution, “the British were embarrassed, the Arabs dismayed and the Turks delighted.”

The agreement is seen by many as a turning point in Western and Arab relations. It negated the UK’s promises to Arabs made through Colonel T. E. Lawrence for a national Arab homeland in the area of Greater Syria in exchange for supporting the British against the Ottoman Empire. 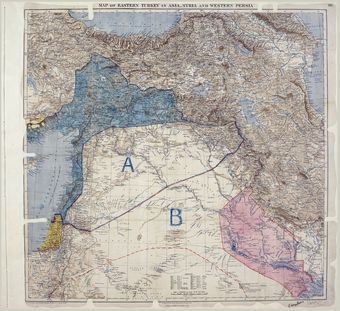 Sykes-Picot Agreement: Map of Sykes-Picot Agreement showing Eastern Turkey in Asia, Syria, and Western Persia, and areas of control and influence agreed between the British and the French. It was an enclosure in Paul Cambon’s letter to Sir Edward Grey, May 9, 1916.

Leading up to the centenary of Sykes-Picot in 2016, great interest was generated among the media and academia in the long-term effects of the agreement. It is frequently cited as having created “artificial” borders in the Middle East, “without any regard to ethnic or sectarian characteristics, [which] has resulted in endless conflict.” The extent to which Sykes-Picot actually shaped the borders of the modern Middle East is disputed, and scholars often attribute instability in the region to other factors.

The Islamic State of Iraq and the Levant (ISIL) claims one of the goals of its insurgency is to reverse the effects of the Sykes–Picot Agreement. “This is not the first border we will break, we will break other borders,” a jihadist from the ISIL warned in a 2014 video titled End of Sykes-Picot. ISIL’s leader, Abu Bakr al-Baghdadi, in a July 2014 speech at the Great Mosque of al-Nuri in Mosul, vowed that “this blessed advance will not stop until we hit the last nail in the coffin of the Sykes-Picot conspiracy.”

Franco-German geographer Christophe Neff wrote that the geopolitical architecture founded by the Sykes–Picot Agreement disappeared in July 2014 and with it the relative protection of religious and ethnic minorities in the Middle East. He claimed further that ISIL affected the geopolitical structure of the Middle East in summer 2014, particularly in Syria and Iraq. Former French Prime Minister Dominique de Villepin presented a similar geopolitical analysis in an editorial contribution for the French newspaper Le Monde.