The United Kingdom in the Middle East

During the partitioning of the Ottoman Empire, the British promised the international Zionist movement their support in recreating the historic Jewish homeland in Palestine via the Balfour declaration, a move that created much political conflict, still present today.

Balfour Declaration
A letter dated November 1917 from the United Kingdom’s Foreign Secretary Arthur James Balfour to Walter Rothschild, 2nd Baron Rothschild, a leader of the British Jewish community, for transmission to the Zionist Federation of Great Britain and Ireland. It stated British support for “a national home for the Jewish people…”
League of Nations
An intergovernmental organization founded on January 10, 1920 as a result of the Paris Peace Conference that ended the First World War. It was the first international organization whose principal mission was to maintain world peace. Its primary goals, as stated in its Covenant, included preventing wars through collective security and disarmament and settling international disputes through negotiation and arbitration. Other issues in this and related treaties included labor conditions, just treatment of native inhabitants, human and drug trafficking, the arms trade, global health, prisoners of war, and protection of minorities in Europe.
Zionism
The national movement of the Jewish people that supports the re-establishment of a Jewish homeland in the territory defined as the historic Land of Israel (roughly corresponding to Palestine, Canaan, or the Holy Land).  It emerged in the late 19th century in Central and Eastern Europe as a national revival movement in reaction to anti-Semitic and exclusionary nationalist movements in Europe. Soon after this, most leaders of the movement associated the main goal with creating the desired state in Palestine, then controlled by the Ottoman Empire.
Mandatory Palestine
A geopolitical entity under British administration, carved out of Ottoman Southern Syria after World War I. British civil administration in Palestine operated from 1920 until 1948.

During World War I, continued Arab disquiet over Allied intentions led in 1918 to the British “Declaration to the Seven” and the “Anglo-French Declaration,” the latter promising “the complete and final liberation of the peoples who have for so long been oppressed by the Turks, and the setting up of national governments and administrations deriving their authority from the free exercise of the initiative and choice of the indigenous populations.”

The British were awarded three mandated territories by the League of Nations after WWI: Palestine, Mesopotamia (later Iraq), and control of the coastal strip between the Mediterranean Sea and the River Jordan. A son of Sharif Hussein (who helped lead the Arab Revolt against the Ottoman Empire), Faisal, was installed as King of Iraq, with Transjordan providing a throne for another of Hussein’s sons, Abdullah. Mandatory Palestine was placed under direct British administration, and the Jewish population was allowed to increase, initially under British protection. Most of the Arabian peninsula fell to another British ally, Ibn Saud, who created the Kingdom of Saudi Arabia in 1932.

British support for an increased Jewish presence in Palestine, though idealistically embedded in 19th-century evangelical Christian feelings that the country should play a role in Christ’s Second Coming, was primarily geopolitical. Early British political support was precipitated in the 1830s and 1840s as a result of the Eastern Crisis after Muhammad Ali occupied Syria and Palestine. Though these calculations had lapsed as Theodor Herzl’s attempts to obtain international support for his project failed, WWI led to renewed strategic assessments and political bargaining regarding the Middle and Far East.

Zionism was first discussed at the British Cabinet level on November 9, 1914, four days after Britain’s declaration of war on the Ottoman Empire. David Lloyd George, then Chancellor of the Exchequer, “referred to the ultimate destiny of Palestine.” In a discussion after the meeting with fellow Zionist and President of the Local Government Board Herbert Samuel, Lloyd George assured him that “he was very keen to see a Jewish state established in Palestine.” He spoke of Zionist aspirations for a Jewish state in Palestine and of Palestine’s geographical importance to the British Empire. Samuel wrote in his memoirs: “I mentioned that two things would be essential—that the state should be neutralized, since it could not be large enough to defend itself, and that the free access of Christian pilgrims should be guaranteed. … I also said it would be a great advantage if the remainder of Syria were annexed by France, as it would be far better for the state to have a European power as neighbour than the Turk.”

James Balfour of the Balfour Declaration declared that: “The four Great Powers are committed to Zionism. And Zionism, be it right or wrong, good or bad, is rooted in age-long traditions, in present needs, in future hopes, of far profounder import than the desires and prejudices of the 700,000 Arabs who now inhabit that ancient land.”

During WWI, Britain produced three contrasting but feasibly compatible statements about their ambitions for Palestine. Through British intelligence officer T. E. Lawrence (aka: Lawrence of Arabia), Britain supported the establishment of a united Arab state covering a large area of the Arab Middle East in exchange for Arab support of the British during the war. Thus, the United Kingdom agreed in the McMahon–Hussein Correspondence that it would honor Arab independence if they revolted against the Ottomans, but the two sides had different interpretations of this agreement. In the end the UK and France divided up the area under the Sykes-Picot Agreement, an act of betrayal in the eyes of the Arabs. Further confusing the issue was the Balfour Declaration of 1917, promising British support for a Jewish “national home” in Palestine.

At the war’s end the British and French set up a joint “Occupied Enemy Territory Administration” in what had been Ottoman Syria. The British achieved legitimacy for their continued control by obtaining a mandate from the League of Nations in June 1922. The formal objective of the League of Nations Mandate system was to administer parts of the defunct Ottoman Empire, which had been in control of the Middle East since the 16th century, “until such time as they are able to stand alone.” The civil Mandate administration was formalized with the League of Nations’ consent in 1923 under the British Mandate for Palestine, which covered two administrative areas. The land west of the Jordan River, known as Mandatory Palestine, was under direct British administration until 1948. The land east of the Jordan, a semi-autonomous region known as Transjordan under the rule of the Hashemite family from the Hijaz, gained independence in 1946.

In a 2002 interview with New Statesman, British Foreign Secretary Jack Straw observed “A lot of the problems we are having to deal with now, I have to deal with now, are a consequence of our colonial past… The Balfour Declaration and the contradictory assurances which were being given to Palestinians in private at the same time as they were being given to the Israelis—again, an interesting history for us but not an entirely honourable one.” 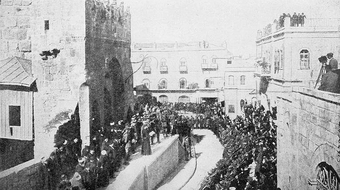 Mandatory Palestine: The formal transfer of Jerusalem to British rule. A native priest reads the proclamation from the steps of the Tower of David.