France in the Middle East

After World War I, Syria and Lebanon became a French protectorate under the League of Nations Mandate System, a move that was met immediately with armed resistance from Arab nationalists.

Connect French politics in the Middle East to the present day

League of Nations mandate
The legal status for certain territories transferred from the control of one country to another following World War I, or the legal instruments that contained the internationally agreed-upon terms for administering the territory on behalf of the League of Nations. Two governing principles formed the core of this system: non-annexation of the territory and its administration as a “sacred trust of civilisation” to develop the territory for the benefit of its native people.
Franco-Syrian War
A war that took place during 1920 between the Hashemite rulers of the newly established Arab Kingdom of Syria and France. During a series of engagements that climaxed in the Battle of Maysalun, French forces defeated the forces of the Hashemite monarch King Faisal and his supporters, entering Damascus on July 24, 1920. A new pro-French government was declared in Syria on July 25.

French Mandate for Syria and the Lebanon

Officially, the Mandate for Syria and the Lebanon (1923−1946), was a League of Nations mandate founded after the First World War for partitioning of the Ottoman Empire concerning Syria and the Lebanon. The Mandate system was considered the antithesis to colonialism, with the governing country acting as a trustee until the inhabitants were able to stand on their own. At that point, the Mandate would terminate and an independent state would be born.

When first arriving in Lebanon, the French were received as liberators by the Christian community, but as they entered Syria, they were faced with a strong resistance, and thus the mandate region was subdivided into six states: Damascus (1920), Aleppo (1920), Alawites (1920), Jabal Druze (1921), the autonomous Sanjak of Alexandretta (1921, modern-day Hatay), and the State of Greater Lebanon (1920), which became later the modern country of Lebanon.

The drawing of those states was based in part on the sectarian makeup of Syria. However, nearly all the Syrian sects were hostile to the French mandate and the division it created, and there were numerous revolts in all of the Syrian states. Maronite Christians of Mount Lebanon, on the other hand, were a community with a dream of independence that was realized under the French; therefore, Greater Lebanon was the exception to the newly formed states.

Although there were uprisings in the respective states, the French purposefully gave different ethnic and religious groups in the Levant their own lands in the hopes of prolonging their rule. During this time of world decolonization, the French hoped to focus on fragmenting the various groups in the region, so the local population would not focus on a larger nationalist movement to dispose of colonial rule. In addition, administration of colonial governments was heavily dominated by the French. Local authorities were given very little power and did not have the authority to independently decide policy. The small amount of power that local leaders had could easily be overruled by French officials. The French did everything possible to prevent people in the Levant from developing self-sufficient governing bodies. In 1930, France extended its constitution on to Syria. 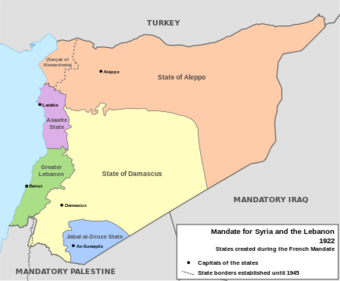 With the defeat of Ottomans in Syria, British troops under General Sir Edmund Allenby entered Damascus in 1918 accompanied by troops of the Arab Revolt led by Faisal, son of Sharif Hussein of Mecca.

The new Arab administration formed local governments in the major Syrian cities, and the pan-Arab flag was raised all over Syria. The Arabs hoped, with faith in earlier British promises, that the new state would include all the Arab lands stretching from Aleppo in northern Syria to Aden in southern Yemen.

However, in accordance with the secret Sykes-Picot Agreement between Britain and France, General Allenby assigned the Arab administration only the interior regions of Syria (the eastern zone). On October 8, French troops disembarked in Beirut and occupied the Lebanese coastal region south to Naqoura (the western zone), replacing British troops there. The French immediately dissolved the local Arab governments in the region.

France demanded full implementation of the Sykes-Picot Agreement, with Syria under its control. On November 26, 1919, British forces withdrew from Damascus to avoid confrontation, leaving the Arab government to face France.

Unrest erupted in Syria when Faisal accepted a compromise with French Prime Minister Clemenceau and Zionist leader Chaim Weizmann over Jewish immigration to Palestine. Anti-Hashemite manifestations broke out and Muslim inhabitants in and around Mount Lebanon revolted with fear of being incorporated into a new, mainly Christian state of Greater Lebanon. Part of France’s claim to these territories in the Levant was that France was a protector of the minority Christian communities.

On April 25, 1920, the supreme inter-Allied council that was formulating the Treaty of Sèvres granted France the mandate of Syria (including Lebanon), and granted Britain the Mandate of Palestine (including Jordan) and Iraq. Syrians reacted with violent demonstrations, and a new government headed by Ali Rida al-Rikabi was formed on May 9, 1920. The new government decided to organize general conscription and began forming an army.

On July 14, 1920, General Gouraud issued an ultimatum to Faisal, giving him the choice between submission or abdication. Realizing that the power balance was not in his favor, Faisal chose to cooperate. However, the young minister of war, Youssef al-Azmeh, refused to comply. In the resulting Franco-Syrian War, Syrian troops under al-Azmeh met French forces under General Mariano Goybet at the Battle of Maysaloun. The French won the battle in less than a day. Azmeh died on the battlefield along with many of the Syrian troops. Goybet entered Damascus on July 24, 1920. The Mandate was written in London on July 24, 1922.

End of the Mandate

With the fall of France in 1940 during World War II, Syria came under the control of the Vichy Government until the British and Free French invaded and occupied the country in July 1941. Syria proclaimed its independence again in 1941 but it wasn’t until January 1, 1944, that it was recognized as an independent republic.

There were protests in 1945 over the slow French withdrawal; the French responded to these protests with artillery. In an effort to stop the movement toward independence, French troops occupied the Syrian parliament in May 1945 and cut off Damascus’s electricity. Training their guns on Damascus’s old city, the French killed 400 Syrians and destroyed hundreds of homes. Continuing pressure from Syrian nationalist groups and the British forced the French to evacuate the last of its troops in April 1946, leaving the country in the hands of a republican government that was formed during the mandate.