The Discovery of Oil in the Middle East

“resource curse”
Also known as the paradox of plenty, refers to the fact that countries with an abundance of natural resources, specifically non-renewable resources like minerals and fuels, tend to have less economic growth, less democracy, and worse development outcomes than countries with fewer natural resources.
953 Iranian Coup
The overthrow of the Prime Minister Mohammad Mosaddegh in favor of strengthening the monarchical rule of Mohammad Reza Pahlavi on August 19, 1953, orchestrated by the United Kingdom (under the name “Operation Boot”) and the United States (under the name “Operation Ajax”).
Red Line Agreement
The name given to an agreement signed by partners in the Turkish Petroleum Company (TPC) on July 31, 1928. The aim of the agreement was to formalize the corporate structure of TPC and bind all partners to a “self-denial clause” that prohibited any of its shareholders from independently seeking oil interests in the ex-Ottoman territory. It marked the creation of an oil monopoly, or cartel, of immense influence, spanning a vast territory.
Abadan Crisis
Occurred from 1951 to 1954 after Iran nationalized the Iranian assets of the Anglo-Iranian Oil Company (AIOC) and expelled Western companies from oil refineries in the city of Abadan.

The history of the oil industry in Iran is representative of the effects of the discovery of oil in the Middle East, and a prime example of the “resource curse”: the paradox that countries with an abundance of natural resources, specifically non-renewable resources like minerals and fuels, tend to have less economic growth, less democracy, and worse development outcomes than countries with fewer natural resources. It is characterized by political and military conflict, in this case caused by British and American interests in the oil industry.

On April 14, 1909, one year after geologist George Bernard Reynolds discovered oil in Persia (modern-day Iran), Burmah Oil created the Anglo-Persian Oil Company (APOC) as a subsidiary and sold shares to the public.

Volume production of Persian oil products eventually started in 1913 from a refinery built at Abadan, for its first 50 years the largest oil refinery in the world. In 1913, shortly before World War I, APOC managers negotiated with a new customer, Winston Churchill, who was then First Lord of the Admiralty of Britain. Churchill, as a part of a three-year expansion program, sought to modernize Britain’s Royal Navy by abandoning the use of coal-fired steamships and adopting oil as fuel for its ships instead. Although Britain had large reserves of coal, oil had advantages in better energy density, allowing a longer steaming range for a ship of the same bunker capacity. Further, Churchill wanted to free Britain from its reliance on the Standard Oil and Royal Dutch-Shell oil companies. In exchange for secure oil supplies for its ships, the British government injected new capital into the company and in doing so, acquired a controlling interest in APOC. The contract that was set up between the British Government and APOC was to hold for 20 years. The British government also became a de facto hidden power behind the oil company.

During this period, Iranian popular opposition to the D’Arcy oil concession and royalty terms whereby Iran only received 16% of net profits was widespread. Since industrial development and planning and other fundamental reforms were predicated on oil revenues, the government’s lack of control over the oil industry served to accentuate the Iranian Government’s misgivings regarding the manner in which APOC conducted its affairs in Iran.

In 1923, Burmah employed Winston Churchill as a paid consultant to lobby the British government to allow APOC to have exclusive rights to Persian oil resources, which were subsequently granted. In 1933, APOC made an agreement with Iran’s Reza Shah, which promised to give laborers better pay and more chance for advancement and build schools, hospitals, roads, and a telephone system. These promises were not kept. In 1935 APOC changed its name to the Anglo-Iranian Oil Company (AIOC).

Following Germany’s invasion of the USSR in June 1941, Britain and the Soviet Union became allies. Britain and the USSR saw the newly opened Trans-Iranian Railway as an attractive route to transport supplies, including oil, from the Persian Gulf to the Soviet Union. Britain and the USSR used concessions extracted in previous interventions to pressure Iran (and, in Britain’s case, Iraq) into allowing the use of their territory for military and logistical purposes. Increased tensions with Britain led to pro-German rallies in Tehran. In August 1941, because Reza Shah refused to expel all German nationals and come down clearly on the Allied side, Britain and the USSR invaded Iran, arrested the monarch, and sent him into exile to South Africa, taking control of Iran’s communications and the coveted railway. They put Reza Shah’s son Mohammad Reza Pahlavi onto the Iranian/Persian throne. The new Shah soon signed an agreement pledging full non-military logistical cooperation with the British and Soviets in exchange for full recognition of his country’s independence and a promise to withdraw from Iran within six months of the war’s conclusion.

Following World War II, nationalistic sentiments were on the rise in the Middle East, especially Iranian nationalism. AIOC and the pro-western Iranian government led by Prime Minister Ali Razmara initially resisted nationalist pressure to revise AIOC’s concession terms further in Iran’s favor. In May 1949, Britain offered a “supplemental oil agreement” to appease unrest in the country, but it did not satisfy Iranian nationalists since it did not give them the right to audit the AIOC’s books. On March 7, 1951, Prime Minister Haj Haj Ali Razmara was assassinated by the Fadayan-e Islam. Fadayan-e Islam supported the demands of the National Front, which held a minority of seats in Parliament, to nationalize the assets of the British Anglo-Iranian Oil Company.

Later in March 1951, the Iranian parliament voted to nationalize the AIOC and its holdings, and shortly thereafter the Iranian public elected a champion of nationalization, Mohammed Mossadegh, Prime Minister. This led to the Abadan Crisis in which foreign countries agreed not to purchase Iranian oil under British pressure and the Abadan refinery was closed. AIOC withdrew from Iran and increased output of its other reserves in the Persian Gulf.

As the months went on, the crisis became acute. By mid-1952, an attempt by the Shah to replace Mossadegh backfired and led to riots against the Shah and perceived foreign intervention; Mossadegh returned with even greater power. At the same time, however, his coalition was weakening as Britain’s boycott of Iranian oil eliminated a major source of government revenue and strategically made Iranians poorer and thus unhappier by the day.

Britain was unable to subvert Mossadegh as its embassy and officials had been evicted from Iran in October 1952. However, they successfully appealed to exaggerated anti-communist sentiments in the U.S., depicting both Mossadegh and Iran as unstable and likely to fall to communism as they weakened.

The anti-Mossadeq plan was orchestrated under the code-name “Operation Ajax” by the CIA, and “Operation Boot” by the British MI6. In August, the American CIA, with the help of bribes to politicians, soldiers, mobs, and newspapers and information from the British embassy and secret service, organized a riot which gave the Shah an excuse to remove Mossadegh.

The Shah seized the opportunity and issued an edict forcefully removing the immensely popular and democratically-elected Mossadegh from power when General Fazlollah Zahedi led tanks to Mossadegh’s residence and arrested him. On December 21, 1953, he was sentenced to death, but his sentence was later commuted to three years’ solitary confinement in a military prison followed by life in prison. 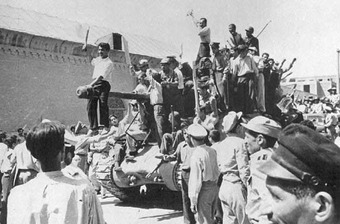 With a pro-Western Shah and the new pro-Western Prime Minister, Fazlollah Zahedi, Iranian oil began flowing again and the Anglo-Iranian Oil Company, which changed its name to British Petroleum in 1954, tried to return to its old position. However, public opinion was so opposed that the new government could not permit it.

Under pressure from the U.S., British Petroleum was forced to accept membership in a consortium of companies that would bring Iranian oil back on the international market. It was incorporated in London in 1954 as a holding company called Iranian Oil Participants. This group of companies, all based outside the Middle East, came to be known as the “Seven Sisters” or the “Consortium for Iran” cartel and dominated the global petroleum industry from the mid-1940s to the 1970s. Until the oil crisis of 1973, the members of the Seven Sisters controlled around 85% of the world’s known oil reserves. Afterward, the oil industry began to nationalize throughout the Middle East.