Zionism, the national movement for a Jewish homeland that resulted in the founding of the State of Israel in 1948, has been controversial since its beginnings in the late 19th century.

Explain the arguments for and against Zionism

pogrom
A violent riot aimed at the massacre or persecution of an ethnic or religious group, particularly one aimed at Jews. The term originally entered the English language to describe 19th and 20th century attacks on Jews in the Russian Empire.
Theodor Herzl
An Austro-Hungarian journalist, playwright, political activist, and writer. He was one of the fathers of modern political Zionism. He formed the World Zionist Organization and promoted Jewish migration to Palestine in an effort to form a Jewish state (Israel).
Ashkenazi Jews
A Jewish diaspora population who coalesced as a distinct community in the Holy Roman Empire around the end of the first millennium. The traditional diaspora language is Yiddish.

Zionism is the national movement of the Jewish people that supports the re-establishment of a Jewish homeland in the territory defined as the historic Land of Israel (roughly corresponding to Palestine, Canaan, or the Holy Land).

After almost two millennia of the Jewish diaspora residing in various countries without a national state, the Zionist movement was founded in the late 19th century by secular Jews, largely as a response by Ashkenazi Jews to rising antisemitism in Europe, exemplified by the Dreyfus affair in France and the anti-Jewish pogroms in the Russian Empire. The political movement was formally established by the Austro-Hungarian journalist Theodor Herzl in 1897 following the publication of his book Der Judenstaat (The Jewish State). At that time, the movement sought to encourage Jewish migration to Ottoman Palestine.

Herzl considered antisemitism an eternal feature of all societies in which Jews lived as minorities, and that only a separation could allow Jews to escape eternal persecution. “Let them give us sovereignty over a piece of the Earth’s surface, just sufficient for the needs of our people, then we will do the rest!” he proclaimed.

Herzl proposed two possible destinations to colonize, Argentina and Palestine. He preferred Argentina for its vast and sparsely populated territory and temperate climate, but conceded that Palestine would have greater attraction because of the historic ties of Jews with that area. He also accepted to evaluate Joseph Chamberlain’s proposal for possible Jewish settlement in Great Britain’s East African colonies. 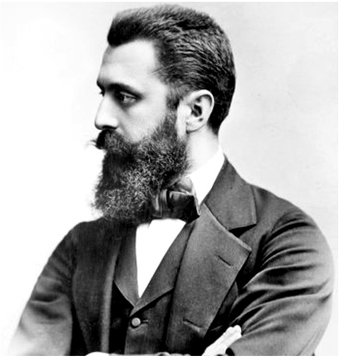 Theodore Herzl: Theodor Herzl is considered the founder of the Zionist movement. In his 1896 book Der Judenstaat, he envisioned the founding of a future independent Jewish state during the 20th century.

Although initially one of several Jewish political movements offering alternative responses to assimilation and antisemitism, Zionism expanded rapidly. In its early stages, supporters considered setting up a Jewish state in the historic territory of Palestine. After World War II and the destruction of Jewish life in Central and Eastern Europe where these alternative movements were rooted, Zionism became the dominant view about a Jewish national state.

Creating an alliance with Great Britain and securing support for Jewish emigration to Palestine, Zionists also recruited European Jews to immigrate there, especially those who lived in areas of the Russian Empire where anti-semitism was prevalent. The alliance with Britain was strained as the latter realized the implications of the Jewish movement for Arabs in Palestine, but the Zionists persisted. The movement was eventually successful in establishing Israel on May 14, 1948, as the homeland for the Jewish people. The proportion of the world’s Jews living in Israel has steadily grown since the movement emerged.

Until 1948, the primary goals of Zionism were the re-establishment of Jewish sovereignty in the Land of Israel, in-gathering of the exiles, and liberation of Jews from the antisemitic discrimination and persecution they experienced during their diaspora. Since the establishment of the State of Israel in 1948, Zionism continues primarily to advocate on behalf of Israel and to address threats to its continued existence and security.

Major aspects of the Zionist idea are represented in the Israeli Declaration of Independence:

The Land of Israel was the birthplace of the Jewish people. Here their spiritual, religious and political identity was shaped. Here they first attained to statehood, created cultural values of national and universal significance and gave to the world the eternal Book of Books.

After being forcibly exiled from their land, the people kept faith with it throughout their Dispersion and never ceased to pray and hope for their return to it and for the restoration in it of their political freedom.

Impelled by this historic and traditional attachment, Jews strove in every successive generation to re-establish themselves in their ancient homeland. In recent decades they returned in their masses.

Advocates of Zionism view it as a national liberation movement for the repatriation of a persecuted people residing as minorities in a variety of nations to their ancestral homeland. Critics of Zionism view it as a colonialist, racist, and exceptionalist ideology that led advocates to violence during Mandatory Palestine, followed by the exodus of Palestinians and the subsequent denial of their human rights.

Zionism has been characterized as colonialism and criticized for promoting unfair confiscation of land, expelling and causing violence towards the Palestinians. Others view Zionism not as colonialist movement, but as a national movement that is contending with that of Palestine. David Hoffman rejected the claim that Zionism is a “settler-colonial undertaking” and instead characterized Zionism as a national program of affirmative action, adding that there is unbroken Jewish presence in Israel back to antiquity.

The first Prime Minister of Israel, David Ben-Gurion, stated that “There will be no discrimination among citizens of the Jewish state on the basis of race, religion, sex, or class.” However, critics of Zionism consider it a racist movement. According to historian Avi Shlaim, throughout its history up to present day, Zionism “is replete with manifestations of deep hostility and contempt towards the indigenous population.” Some criticisms of Zionism claim that Judaism’s notion of the “chosen people” is the source of racism in Zionism.

In December 1973, the UN passed a series of resolutions condemning South Africa and included a reference to an “unholy alliance between Portuguese colonialism, Apartheid and Zionism.” At the time there was little cooperation between Israel and South Africa, although the two countries would develop a close relationship during the 1970s. Parallels have also been drawn between aspects of South Africa’s apartheid regime and certain Israeli policies toward the Palestinians that are seen as manifestations of racism in Zionist thinking.

Some critics of anti-Zionism have argued that opposition to Zionism can be hard to distinguish from antisemitism, and that criticism of Israel may be used as an excuse to express viewpoints that might otherwise be considered antisemitic.

On the other hand, anti-Zionist writers such as Noam Chomsky, Norman Finkelstein, Michael Marder, and Tariq Ali have argued that the characterization of anti-Zionism as antisemitic is inaccurate, that it sometimes obscures legitimate criticism of Israel’s policies and actions, and that it is sometimes used as a political ploy in order to stifle legitimate criticism of Israel.

Some antisemites have alleged that Zionism was or is part of a Jewish plot to take control of the world. One particular version of these allegations, “The Protocols of the Elders of Zion” achieved global notability. The protocols are fictional minutes of an imaginary meeting by Jewish leaders of this plot. Analysis and proof of their fraudulent origin goes as far back as 1921. A 1920 German version was extensively used as propaganda by the Nazis and remains widely distributed in the Arab world. The protocols are cited in the 1988 Hamas charter.