The Beginning of the Cold War

At the end of the war, millions of people were homeless, the European economy had collapsed, and much of the continent’s industrial infrastructure had been destroyed.

Describe the condition of the European continent after World War II

Marshall Plan
An American initiative to aid Western Europe in which the United States gave more than $12 billion in economic support to help rebuild Western European economies after the end of World War II.
German economic miracle
Also known as The Miracle on the Rhine, the rapid reconstruction and development of the economies of West Germany and Austria after World War II.

The aftermath of World War II was the beginning of an era defined by the decline of the old great powers and the rise of two superpowers: the Soviet Union (USSR) and the United States of America (U.S.), creating a bipolar world. Allied during World War II, the U.S. and USSR became competitors on the world stage and engaged in the Cold War, so-called because it never boiled over into open war between the two powers but was focused on espionage, political subversion, and proxy wars. Western Europe and Japan were rebuilt through the American Marshall Plan whereas Eastern Europe fell in the Soviet sphere of influence and rejected the plan. Europe was divided into a U.S.-led Western Bloc and a Soviet-led Eastern Bloc.

As a consequence of the war, the Allies created the United Nations, a new global organization for international cooperation and diplomacy. Members of the United Nations agreed to outlaw wars of aggression to avoid a third world war. The devastated great powers of Western Europe formed the European Coal and Steel Community, which later evolved into the European Common Market and ultimately into the current European Union. This effort primarily began as an attempt to avoid another war between Germany and France by economic cooperation and integration and as a common market for important natural resources.

The Allies established occupation administrations in Austria and Germany. The former became a neutral state, non-aligned with any political bloc. The latter was divided into western and eastern occupation zones controlled by the Western Allies and the USSR accordingly. A denazification program in Germany led to the prosecution of Nazi war criminals and the removal of ex-Nazis from power, although this policy moved towards amnesty and reintegration of ex-Nazis into West German society.

Germany lost a quarter of its prewar (1937) territory. Among the eastern territories, Silesia, Neumark, and most of Pomerania were taken over by Poland; East Prussia was divided between Poland and the USSR and 9 million Germans expelled from these provinces; and 3 million Germans from the Sudetenland in Czechoslovakia to Germany. By the 1950s, every fifth West German was a refugee from the east. The Soviet Union also took over the Polish provinces east of the Curzon line, from which 2 million Poles were expelled; northeast Romania, parts of eastern Finland, and the three Baltic states were also incorporated into the USSR.

By the end of the war, the European economy had collapsed and 70% of the industrial infrastructure was destroyed. The property damage in the Soviet Union consisted of complete or partial destruction of 1,710 cities and towns, 70,000 villages, and 31,850 industrial establishments. The strength of the economic recovery following the war varied throughout the world, though in general it was quite robust. In Europe, West Germany declined economically during the first years of the Allied occupation but later experienced a remarkable recovery, and had by the end of the 1950s doubled production from its prewar levels. Italy came out of the war in poor economic condition, but by the 1950s, the Italian economy was marked by stability and high growth. France rebounded quickly and enjoyed rapid economic growth and modernization under the Monnet Plan. The UK, by contrast, was in a state of economic ruin after the war and continued to experience relative economic decline for decades to follow. 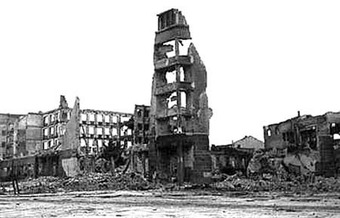 Stalingrad Aftermath: Ruins in Stalingrad, typical of the destruction in many Soviet cities.

The U.S. emerged much richer than any other nation and dominated the world economy; it had a baby boom and by 1950 its gross domestic product per person was much higher than that of any of the other powers . The UK and US pursued a policy of industrial disarmament in Western Germany in the years 1945–1948. International trade interdependencies thus led to European economic stagnation and delayed the continent’s recovery for several years.

U.S. policy in post-war Germany from April 1945 until July 1947 was to give the Germans no help in rebuilding their nation, save for the minimum required to mitigate starvation. The Allies’ immediate post-war “industrial disarmament” plan for Germany was to destroy Germany’s capability to wage war by complete or partial deindustrialization. The first industrial plan for Germany, signed in 1946, required the destruction of 1,500 manufacturing plants to lower heavy industry output to roughly 50% of its 1938 level. Dismantling of West German industry ended in 1951. By 1950, equipment had been removed from 706 manufacturing plants and steel production capacity had been reduced by 6.7 million tons.

After lobbying by the Joint Chiefs of Staff and Generals Lucius D. Clay and George Marshall, the Truman administration accepted that economic recovery in Europe could not go forward without the reconstruction of the German industrial base on which it had previously been dependent. In July 1947, President Truman rescinded on “national security grounds” the directive that ordered the U.S. occupation forces to “take no steps looking toward the economic rehabilitation of Germany.” A new directive recognized that “[a]n orderly, prosperous Europe requires the economic contributions of a stable and productive Germany.”

Recovery began with the mid-1948 currency reform in Western Germany and was sped up by the liberalization of European economic policy that the Marshall Plan (1948–1951) both directly and indirectly caused. The post-1948 West German recovery has been called the German economic miracle.